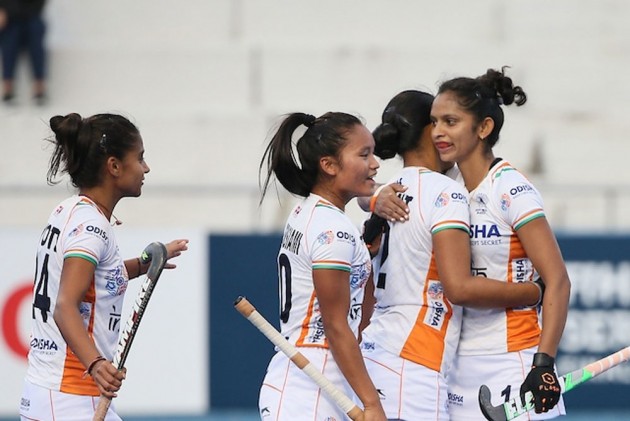 The Indian women hockey team emulated their male counterparts by winning the 2020 Olympics Test event with a fighting 2-1 victory over Japan in the final at Tokyo on Wednesday. (For More Hockey News)

Navjot Kaur (11th minute) opened the scoring to put India ahead but the lead was neutralised within a minute as Minami Shimizu (12') scored for the hosts.

Earlier, Indian men's team beat New Zealand 5-0 to avenge the loss it endured in their round-robin clash and won the Olympic event.

India dominated the first 10 minutes, and finally managed to find the breakthrough when Forward Navjot kept her nerves under pressure and produced a fine finish in front of the goal.

However, the next minute saw Japan strike back immediately with a well-crafted field goal which was put into the back of the net by Shimizu to make it 1-1.

The second quarter saw both the teams focus on their defensive structure and tread carefully in the attacking third.

India had a few chances in the first few minutes, with the likes of Vandana Katariya and Navjot combining well on the attacking front, but could not produce a goal-scoring opportunity.

Japan also tried to create some opportunities of their own, with goalscorer Shimizu coming close to scoring her second of the match, but India defended well.

It was an aggressive start from the Indian team after the half-time break as they won themselves a penalty corner in the 33rd minute.

India's prolific drag-flicker Gurjit Kaur stepped up to take the execution, but her shot was saved by the Japanese Goalkeeper Megumi Kageyama.

However, the rebound fell to India's young Forward Lalremsiami, who did not make a mistake in putting the ball into the back of the net to make it 2-1 for India.

It was a huge blow to the hosts who were finding it difficult to cope up with India's rhythm, but after some tough battles in the midfield, the Japanese team earned themselves back-to-back penalty corners in the 42nd minute.

However, India's defense was up to the task, and made sure that they protected their lead. India also had a penalty corner in the 45th minute, but could not extend their lead.

The first chance of the last quarter came India's way but Kageyama made a diving save. Japan too got back-to-back penalty corners but Indian Goalkeeper Savita made a great save on the second attempt to make sure that India saw out a 2-1 win.