Yuzvendra Chahal and Dhanashree Verma, known for their social media dance videos, announced their engagement in August by sharing pictures from the Roka ceremony 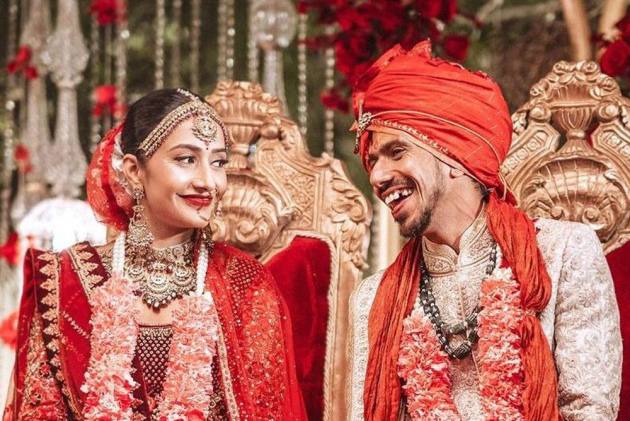 India cricketer Yuzvendra Chahal got married to choreographer Dhanashree Verma in Gurugram on Tuesday. According to reports, the wedding was a private affair with only the relatives and close friends in attendance. (More Cricket News)

Chahal, who was in Australia with the national cricket team, returned home after the end of the limited-overs leg.

A picture of the newlyweds became viral on the Internet. In the picture, Dhanashree is seen wearing a maroon lehenga, while Chahal adorned an ivory sherwani with a maroon turban.

Congratulations to @yuzi_chahal and Dhanashree on their wedding
Have a beautiful life together
ðÂÂÂ¤µðÂÂÂÂÂÂ»âÂÂÂ¤ï¸ÂÂÂðÂÂÂÂÂÂ°ðÂÂÂÂÂÂ» pic.twitter.com/YrzR2mQMbg

And soon, the spinner shared a beautiful post with the caption: "We started at “Once Upon A Time” and found “Our Happily Ever After,” coz’ finally, #DhanaSaidYuz for infinity & beyond!"

We started at “Once Upon A Time” and found “Our Happily Ever After,” coz’ finally, #DhanaSaidYuz for infinity & beyond! pic.twitter.com/h7k3G3QrYx

Chahal and Verma announced their engagement in August by sharing pictures from the Roka ceremony.

Verma, besides being a choreographer, is also a doctor. She has a YouTube with a huge following.

In fact, according to Verma, their relationship "started off as a student-teacher relationship in April" after Chahal had seen her dance videos on YouTube."

"During the lockdown, Yuzi decided to learn a few new things, including dance. So, he got in touch with me and we started our classes. Slowly we became friends and sort of felt a connect," Verma said.

And coronavirus lockdown gave them a lot more time to know each other better.