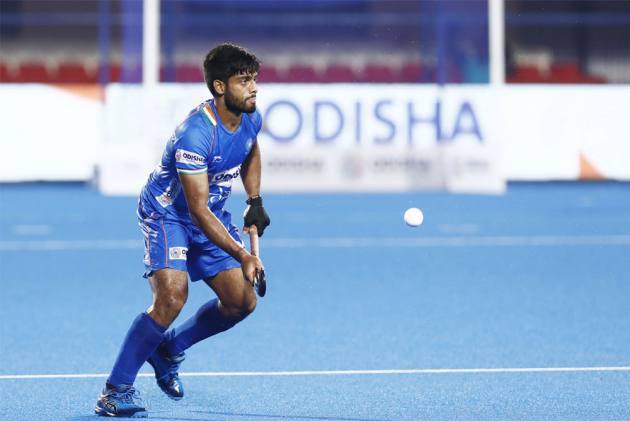 Disappointed to lose out on a place in the initial 16-member squad for the Olympics, Indian men's hockey team defender Varun Kumar considers himself lucky to make a bronze medal-winning debut in the Tokyo Games after he was called up in the side as an alternate player owing to the COVID-19 pandemic. (More Hockey News)

Varun, a drag-flicker, and mid-fielder Simranjeet Singh made their Olympic debut after they were added to India's squad following the International Olympic Committee's decision to allow "alternate athletes" in team events due to the pandemic.

"When the squad for the Olympics was announced, my name was not part of the 16-member squad. I still remember that day very well and I was evidently disappointed," recalled Varun.

"But after a few days when IOC allowed hockey teams to expand to 18 players, Simranjeet and I were called up as alternate athletes. It came as a huge relief but somewhere at the back of my mind I was still upset about not making it to the final 16 and I really wanted to prove myself."

Varun further stated that skipper Manpreet Singh's one-on-one chat with him before the team left for Tokyo helped him a lot.

"It really helped that captain Manpreet had a long chat with me and pumped me up mentally. Manpreet has been a big influence in my career from a very young age as we played in the same academy and him talking to me made a lot of difference.

"I stopped beating myself up for not being good enough to make the 16-member squad. I started focusing on how I can make this opportunity count and deliver when the team needs me," stated Varun.

What followed in Tokyo is now part of history as the Indian men's hockey team went on to clinch an Olympic medal, bronze, after a hiatus of 41 years.

Varun played a key role in India's 3-1 win over Argentina in the pool stages as he scored the first goal of the match. He was effective in the backline and impressed with his performance every time he was called up.

"It was indeed a fantastic experience in Tokyo. Winning the bronze and standing on the podium along with my teammates is perhaps the best moment of my life. Now my priority will be to improve in every aspect.

"We have had a good break after the Olympics and we are all waiting to return to camp in October," he said.