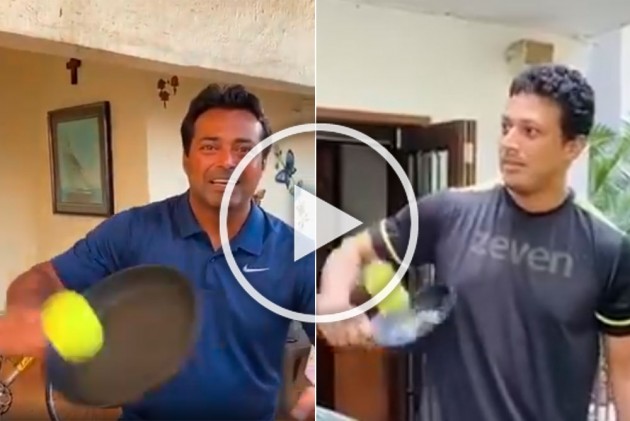 Tennis legend Leander Paes has heaped praise on his former Grand Slam winning partner Mahesh Bhupathi, saying he always had 'mad' skills and he remembers the volleys which won the pair a few Grand Slams.

"You've always had mad skills and I remember that volley winning us a few Grand Slams," Paes tweeted in reply to Bhupathi taking up his 'Frying Pan' challenge.

You’ve always had mad skills and I remember that volley winning us a few Grand Slams ðð¾ð https://t.co/A4gEoe86md

Bhupathi has won three of his four Grand Slam doubles titles with Paes.

"@Leander here you go, I tried your no look, talking to the camera version but I don't have that kind of skill so I went down in size to a mini frying pan to make it challenging," Bhupathi had earlier tweeted with a video of him volleying a tennis ball on the wall with a small frying pan.

Here’s a challenge for you guys while we’re in lockdown! How many can you do?

I’m challenging all of you out there. Send in your entries with the #FryingPanChallenge, tag me, and I’ll share the best few! ð#TennisAtHome #StayHomeStaySafe #NoLookVolley #LockdownChallenge pic.twitter.com/V2rDlfEY4v

Earlier this week, Swiss Maestro Roger Federer had posted a video of himself volleying, while slamming the ball on the wall. He also urged fans and celebrities, including the likes of Virat Kohli, Novak Djokovic, Rafael Nadal, etc to take up the challenge.

However, Paes went one step ahead and has come out with the 'Frying Pan' challenge.

"Here's a challenge for you guys while we're in lockdown! How many can you do? I'm challenging all of you out there. Send in your entries with the Frying Pan Challenge, tag me, and I'll share the best few!" Paes tweeted along with the video of him hitting no-look volleys with a frying pan.

Former Indian Davis Cup captain Bhupathi, who had partnered Paes in men's doubles for many years in the past, was in awe of the 46-year-old. Quoting the video put on ATP Twitter handle, Bhupathi wrote, "Man can volley with anything."