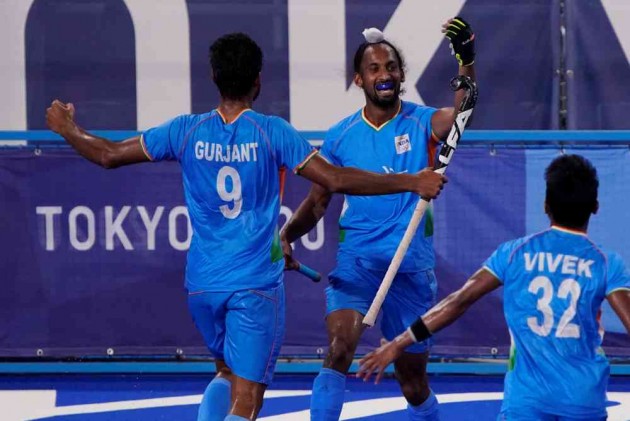 A determined Indian men's hockey team advanced to the Olympic semifinals for the first time in 49 years, beating Great Britain 3-1 in the quarterfinals here on Sunday, a triumph which leaves the side within touching distance of a medal that has proved elusive for over four decades.

Great Britain's lone goal was scored by Sam Ward from a penalty corner in the 45th minute.

India will take on world champions Belgium in the semifinal on Tuesday.

India's last of the eight Olympic gold medals came way back in 1980 Moscow Games but there were no semifinals in that edition as only six teams participated in the event.

For a country that gave the world stalwarts like Major Dhyan Chand and Balbir Singh Senior among others, it has been especially painful to watch the hockey teams' Olympic debacles before this edition.

The last time India featured in the semifinals of the Olympics was in 1972 Munich Games where they lost 0-2 to arch-rivals Pakistan.

It was the edition in which American swimming legend Mark Spitz won seven gold medals, a feat which was overshadowed by the massacre of 11 Israeli athletes and coaches by Palestinian terrorists at the Olympic Village.

Belgium defeated Spain 3-1 in another quarterfinal to seal their place in the last four round.

The other semifinal of the men's hockey competition will be played between Australia and Germany.

By virtue of this win, India now have a 5-4 win-loss record over Great Britain in the Olympic Games.

In Sunday's tie, Great Britain enjoyed the early share of exchanges, earning their first penalty corner as early as in the third minute but India defended well to keep the danger away.

The Indians got their footing into the match as time went by and took the lead in the seventh minute through Dilpreet, who pushed the ball in past Great Britain goalkeeper after being fed by Simranjeet Singh.

It was Simranjeet who created the chance after he stole the ball from a Great Britain defender just outside the latter's circle.

The Indians didn't let their rivals settle down and doubled their lead seconds into the second quarter through Gurjant.

It was Hardik who created the opportunity by intercepting a pass just outside the Great Britain 'D' and then sent the ball to an unmarked Gurjant, who kept a calm head to put the ball into the net through the legs of opposition goalkeeper Oliver Payne.

In the 35th minute, Gurjant had another chance to extend the lead but his reverse hit from a tight angle was easily saved by Payne.

Thereafter, it was all Great Britain as they pressed numbers in front in search of goals.

Leading by two goals, the Indians dropped back and tried to defend the lead but the move proved costly as minutes from the end of the third quarter Great Britain secured four back-to-back penalty corners the last of which was put into the back of the net by Ward.

With 15 more minutes remaining and just a goal behind, Great Britain went on the offensive in the final quarter, throwing numbers into their attacks as the Indians struggled to control the onslaught.

Great Britain succeeded in their efforts as they earned three more penalty corners in the match but th eredoubtable Sreejesh rose to the occasion and pulled off saves after saves to keep his side ahead.

India extended their lead against the run of play in the 57th minute when Hardik scored with a rebound from a counter-attack after his initial shot was saved by Great Britain goalkeeper Payne.

That goal sealed the tie in India's favour as down by two goals and with just three minutes remaining, Great Britain players' shoulders dropped down.

Once the hooter went off to declare the match's end, Indian players had tears of joy as they hugged and congratulated each other.