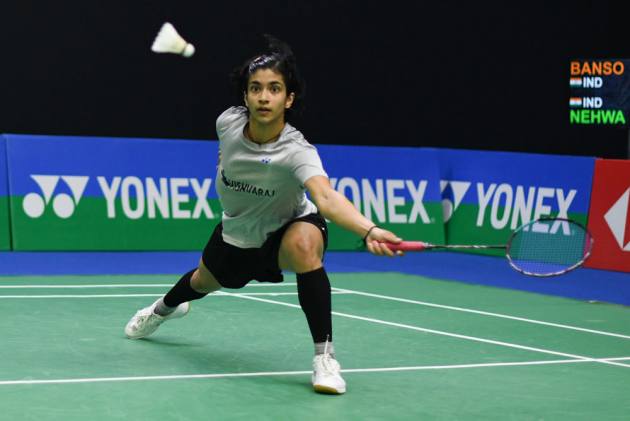 Malvika, ranked 111th, took 34 minutes to see off the former world number 1, becoming only the second Indian to beat Saina since 2017 in any international tournament.

"It was my first meeting with Saina Nehwal. She has been my idol since I started playing badminton. So playing against her was a dream come true and that too, in the Indian Open, on such a big stage.

"... A Super 500 tournament, it was a big achievement for me, one of the biggest wins of my career so far," the 20-year-old Malvika said after her win.

Coming back from knee and groin injuries, Saina, who had won her first round match on Tuesday, was happy with the her movement on the court but said she had a lot of catching up to do on the fitness front.

"I was moving on the court but my fitness is still not where it should be. So I came here to see were I stand. My body is good but fitness level I need to work on," Saina said, adding, that Malvika is "very good" in rallies and has a bright future.

She will meet compatriot Ashmita Chaliha, who got the better of french shuttler Yaelle Hoyaux 21-17 21-14, in the quarterfinal on Thursday.

Malvika will next take on fellow Indian Aakarshi Kashyap in the quarterfinals.

Aakarshi had defeated compatriot Keyura Mopatin 21-10 21-10 in another women's singles second round match.

World championships bronze medallist Sen also moved to the quarter-finals after defeating Felix Burestedt of Sweden 21-12, 21-15. He will take on compatriot HS Prannoy in the last eight.

Prannoy received a walkover as his opponent Mithun Manjunath withdrew from the tournament after testing positive for COVID-19.

The men's top seed Kidambi Srikanth, doubles player Ashwini Ponnappa, Ritika Rahul Thkar, Treesa Jolly, Simran Aman Singh and Khushi Gupta are the other players who had to withdraw from the tournament due to the positive COVID-19 results, which led to several walkovers.

Sameer Verma's campaign also came to an end in the men's singles as he retired midway during his second-round match against Brain Yang of Canada due to calf strain.

In the day’s other matches, men’s singles world champion Loh Kean Yew defeated Joo Ven Soong 21-12, 21-12 to reach the quarterfinals, where he was also joined by Malaysia’s NG Tze Yong.

In the men's doubles, the second seed pairing of Satwiksairaj Rankireddy and Chirag Shetty defeated compatriots Shyam Prasad and S.Sunjith 21-9, 21-18 in 32minutes. They will now clash with the unseeded duo of Hee Yong Kai Terry and Loh Kean Hean of Singapore.