The girls team of Priya Gurjar, Parneet Kaur and Ridhu Senthilkumar combined for a total of 2067 to better the previous record by 22 points. 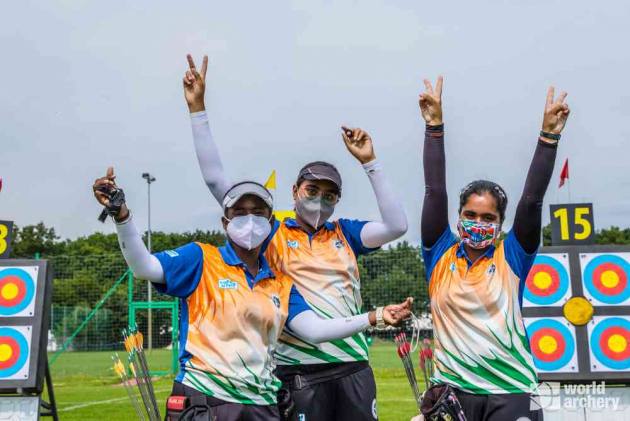 The Indian compound girls and mixed team on Tuesday broke two Under-18 world records during their ranking round of the World Youth Championships  in Wroclaw. (More Sports News)

The girls team of Priya Gurjar, Parneet Kaur and Ridhu Senthilkumar combined for a total of 2067 to better the previous record by 22 points.

Priya shot 696 to take the individual pole, while Parneet Kaur (third) and Ridhu Varshini Senthilkumar (fourth) were the next best Indians.

American trio of Keane Sanchiko, Breanna Theodore and Savannah Vanderwier had the previous record of 2045 registered in Rosario in 2017.

Priya also combined with Kushal Dalal (705) for a mixed pair tally of 1401 to break the previous mark held by Danish duo of Natacha Stutz and Mathias Fullerton (1387) at the Madrid World Youth Championships in 2019.

"I'm really happy but I can shoot even more than I did today. I have to shoot proper shots and try my best, then I can get even better results. My goal is to become world champion and I will do my best," 17-year-old Priya said.

The compound U-18 team took the second place with Dalal taking the third place in the individual ranking round.

Reigning U-18 recurve world champion Komalika Bari, who is returning to the Under-21 age group of juniors, ranked sixth with 656 points as the Indian women's team took the fifth place with a combined tally of 1905.

The recurve U-21 men's team, on the other hand, took the second place with Parth Salunkhe (663) leading the Indian challenge with a seventh place ranking in the individual section.

The men's team totalled 1977 points to take the second seed behind Russia.