Quinton de Kock has been handed South Africa's T20 captaincy in the absence of Faf du Plessis as the management is looking to groom him ahead of the World Cup next year. 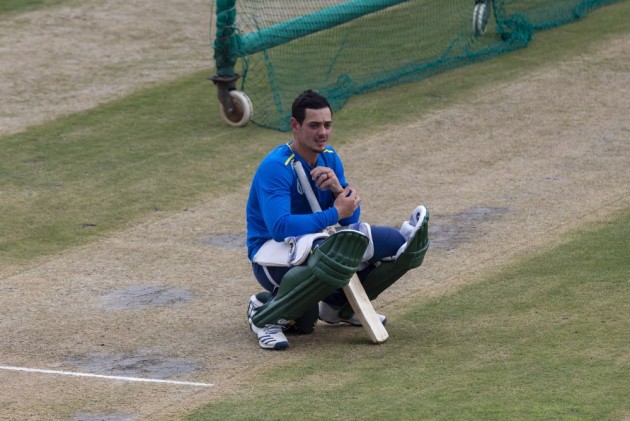 Newly-appointed South African T20 captain Quinton de Kock on Tuesday (September 17) said the additional responsibility could be a double-edged sword but he is not thinking too much about it. (CRICKET NEWS)

De Kock is one of the senior players in this new-look team and has been handed captaincy in the absence of Faf du Plessis as the management is looking to groom him ahead of the T20 World Cup next year.

"Not too concerned to be honest. It is a new stepping stone in my career, gives me extra responsibility. Not sure if it would affect me negatively or positively," said the wicket-keeper batsman ahead of the second T20 against India on Wednesday (September 18) in Mohali.

IPL regular de Kock, who won the final with Mumbai Indians earlier this year, is pretty familiar with the conditions in India.

Asked if he is prepared to play the mentor's role in the team, like du Plessis and Ab de Villiers played when he burst on to the scene, de Kock said: "I think they (Faf and ABD) gave me lots of room to play the way I wanted to. I don't see it why that would change without them being here.

"Even they in their career have had to do the same thing we are doing. So we will take it as it comes. In the leadership group in the team we have had a chat (on grooming the youngsters). It is under control so far but we are still learning as part of a young leadership group."

De Kock said some youngsters could get a longer rope while some may not.

It has effectively become a two-match series with the series opener in Dharamasala being washed out.

"We would like to have played three games against the Indian team. Leading into the World Cup, to lose out on a game in different conditions, it is not ideal but it is what it is."

After the IPL final, de Kock had made an interesting comment, calling the triumph with Mumbai Indians the biggest achievement of his career. He still feels the same on the subject.

Asked about the Virat Kohli-Kagiso Rabada contest, he added: "They both are good players in their own way. It will be a good contest. They like being very positive in the way they play."