Remember, Dhoni was the man of the series in India's maiden ODI series win in Australia. Now, he has scored four back-to-back fifties against the Aussies 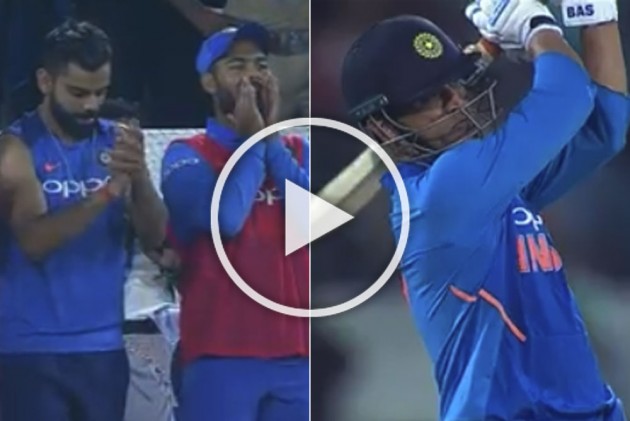 This is what the official page of Indian Cricket Team wrote minutes before Mahendra Singh Dhoni hit back-to-back boundaries to finish a tricky chase against Australia in the first ODI at Hyderabad on Saturday.

Chasing 237, India lost opener Shikhar Dhawan in the second over itself. A 76-run stand between the skipper Virat Kohli and his deputy Rohit Sharma steadied the Indian ship, but three wickets on a slow wicket made things bleak for the hosts.

But there was Dhoni. And together with imperious Kedar Jadhav, the former India captain stitched an unbeaten 141-run stand for the fifth-wicket to set up a six-wicket win with 10 balls to spare.

The 37-year-old then hit back-to-back fours to wrap up the proceedings.

We Will Never Seen A Finisher Like MSD,He Is Still Young,Can Finish The Game Like Past. Love u mahi #AUSvIND #DHONI #MSDhoni pic.twitter.com/ciSP0GxOPn

In the process, Dhoni also his 71st ODI fifty, reaching the mark off 68th ball he faced.

Remember, Dhoni was the man of the series in India's maiden ODI series win in Australia. Now, he has scored four back-to-back fifties against the Aussies – 51 at Sydney, 55 not out at Adelaide, 87 not out at Melbourne and 59 not at Hyderabad.