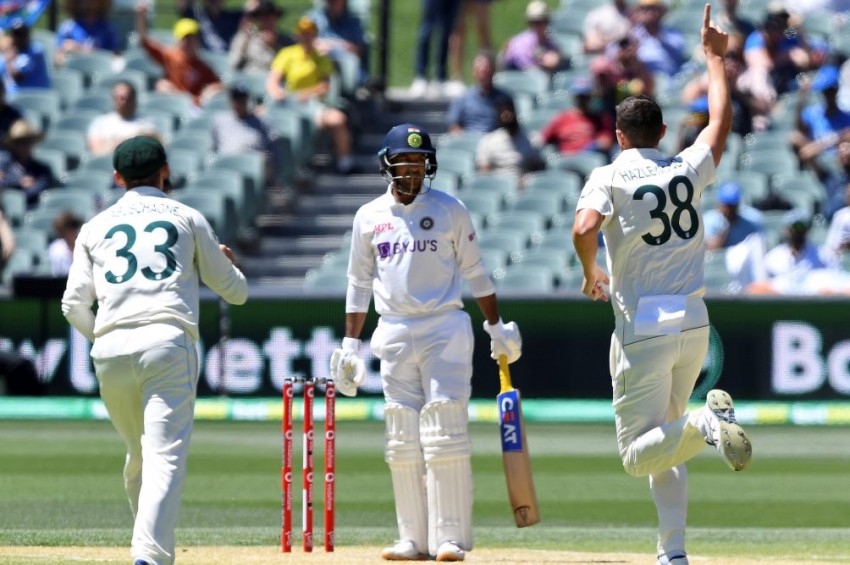 The humiliation in Adelaide has opened up "serious wounds" for India and Australia now have a "good chance" of inflicting on the visitors a whitewash in the four-Test series, reckons former captain Ricky Ponting. 1ST TEST SCORECARD | HIGHLIGHTS | NEWS | GALLERY

India were bundled out for their lowest-ever Test score of 36 in their second innings as Australia claimed an eight-wicket win in the pink-ball Test to take a 1-0 lead in the Border-Gavaskar trophy.

"Now there's some serious wounds opened up. There could be a good chance (of a sweep)," Ponting told cricket.com.au.

"Let's hope we do get a result in Melbourne and if we do, I think India's going to find it really hard to bounce back and win a game."

India will miss skipper Virat Kohli in the remaining three Tests as he returns home for the birth of his child and Ponting said it will be a real test for the visitors as they look to pick up the pieces under the captaincy of Ajinkya Rahane.

"We'll learn a lot about them, won't we? With Kohli not being there as well there's almost no one to pick them back up after a loss like that," Ponting said.

India will need to find their best playing XI for the Boxing Day Test, especially after the below-par performances of young opener Prithvi Shaw, who made 0 and 4, and wicketkeeper Wriddhiman Saha.

Ponting is in favour of giving a chance to dashing wicketkeeper-batsman Rishabh Pant and young batter Shubman Gill in Melbourne.

"They've got to make a couple of changes. Rishabh Pant has to be in that middle order. With Kohli not being there they've got to strengthen their batting, he's got to come in," he said.

"They'll look at Prithvi Shaw at the top of the order I'm sure but there's one thing to make selection changes there's another to lift the spirits back up again and make sure they're mentally right for the next challenge because the Australians are not going to go away now."

"Now that they've got a bit of a sniff they're going to go even harder next game."

With Joe Burns returning to form with a 63-ball 51 and the experienced David Warner and young Will Pucovski -- who missed the first Test due to groin injury and concussion respectively -- in contention for the Melbourne Test, Australia will have a happy selection headache.

Ponting believes Pucovski will have to wait for his debut if Warner is fit for the MCG Test.

"If David's fit he comes straight back in ... they've got a decision to make then on (Cameron) Green and (Matthew) Wade. That's the only obvious thing there," Ponting said.

"If both and Pucovski and Warner are fit I think Will will have to wait again. On the back of Burns getting fifty they've got to keep going with him, that's the right call and that's fair enough.

"There's a couple of little things there for the Aussies to think about but India will have a lot more headaches than them."