Chahal's 3/25 in his four overs had a massive role to play in clinching that triumph and he was adjudged player of the match for it. 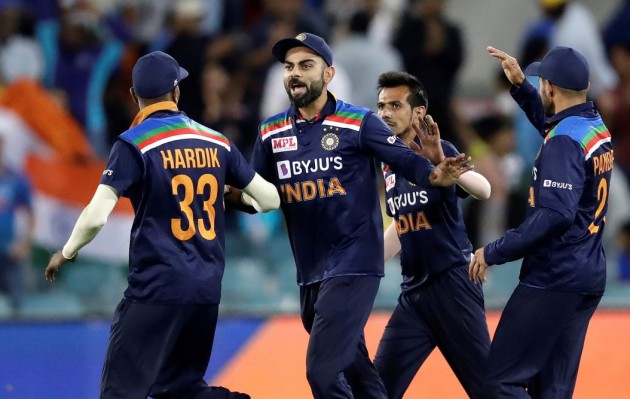 A concussed Ravindra Jadeja was replaced by Yuzvendra Chahal in the first T20 International against Australia here on Friday with both the players making match-winning contributions much to the frustration of the home side.  SCOREBOARD | TOUR SCHEDULE | NEWS

Before Jadeja was hit by a Mitchell Starc bouncer in the final over of the Indian innings, he was seen limping while running between the wickets. He remained unbeaten at 44 off 23 balls, which helped India post 161/7 that ultimately proved enough for a win by 11 runs.

Chahal's 3/25 in his four overs had a massive role to play in clinching that triumph and he was adjudged player of the match for it.

"Ravindra Jadeja was hit on the helmet in the final over of the first innings of the first T20I. Yuzvendra Chahal will take the field in the 2nd innings as a concussion substitute. Jadeja is currently being assessed by the BCCI Medical Team," read a BCCI post on its Twitter handle.

Australia head coach Justin Langer was seen having an animated conversation with match referee David Boon on the sidelines but it was not known whether it had anything to with the decision to allow Chahal as a concussion substitute.

"Their doctor had ruled Jadeja out due to concussion. You can't be challenging a medical expert's opinion," said Australia captain Aaron Finch after the match.

His teammate and all-rounder Moises Henriques was a bit more forthcoming on the frustration felt by the side.

"A decision was taken that there was a concussion and we are fine with that. But was there a like for like replacement? Jadeja was more of an all-rounder, and he had done his batting. Chahal is a bowler," he said in the post-match press conference.

After being hit on the helmet, Jadeja seemed fine and walked back to the dressing room, prompting a bit of chatter among the commentators on the severity of his injury.

"I have no issue with Jadeja being substitute (sic) with Chahal. But I do have an issue with a Doctor & Physio not being present after Jadeja was struck on the helmet which I believe is protocol now?" asked former Australia cricketer Tom Moody, who is now a coach and a commentator.

In July last year, the International Cricket Council had allowed like for like concussion substitutes in case a player got hit on the head.

"ICC Match Referee should consider the likely role the concussed player would have played during the remainder of the match, and the normal role that would be performed by the nominated Concussion Replacement," the ICC rule states.