India Vs Australia: Will Virat Kohli Drop Himself Down The Order To Use Both Shikhar Dhawan, KL Rahul?

With vice-captain Rohit Sharma an automatic pick, the India national cricket team management is left with tough choice of selecting either Shikhar Dhawan or KL Rahul in the playing eleven. But Virat Kohli sees no reason why both can't play together. 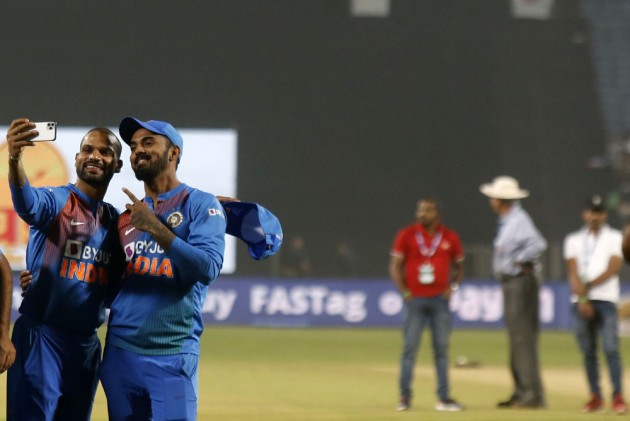 India captain Virat Kohli on Monday hinted at dropping himself down the batting order to accommodate both Shikhar Dhawan and KL Rahul in the playing XI against Australia in the first ODI.

With vice-captain Rohit Sharma an automatic pick, the team management is left with tough choice of selecting either Dhawan or Rahul in the playing eleven. But the skipper sees no reason why both can't play together.

"Look, a guy in form is always good for the team. ...You obviously want to have the best players available and then chose from what the combination should be for the team.
There might be a possibility that all three (Rohit, Shikhar and Rahul) might play. It will be interesting to see what balance we want to take in on the field," Kohli said on the eve of the match.

Asked if he would he be happy to bat lower down the order, Virat said,"Yeah, big possibility. I would be very happy to do so. Look I am not possessive about where I play. I am not insecure about where I bat," said the skipper.

For Kohli, it is more important as to what kind of leadership legacy he leaves behind rather than chase personal glory.

"Being the captain of the team, it is my job to make sure that the next lot is also ready. A lot of the other people might not look at it that way, but your job as a captain is not only to look after the team right now, but also to prepare a team that you leave behind when you eventually pass it onto someone else," he added.

Kohli stressed that the vision has to be long-term one.

"So these are times when you need to be aware. It is very easy to get into a personal zone, saying I need to get runs and when I score, I feel good about everything. It is not like that, it does not work like that.

"The vision has to be always on the larger picture and figure out how can you make these guys confident. If at all someone has to take responsibility, it should be me and give the other guys opportunities as well."

Virat said that the present Australia side are stronger than the one when they toured India last year and returned victorious 3-2.

"They are a stronger side than the one that came to India last time, but they still won the series. In the series before that, they played a full strength side but we won the series.

"That shows you how competitive the series between these two teams are and it's never a dominating series, the margin is always 3-2 or 2-1. Maybe five games would have been exciting.

"But taking on Australia, even in our conditions, they have played so much IPL, now they are pretty experienced in these conditions. It's always a good and a tough challenge playing Australia, because of the skill set and the mind set they bring on to the field," added the India skipper.

He also insisted that when India plays Australia, the competitive flavour tales precedence over context of a bilateral series.

"When you are playing Australia, you don't look at the relevance of the series. It's about playing against the best. The way they are playing their cricket now, after Steve (Smith) and David (Warner) have come back, it's pretty intense. They are challenging every team and they are dominating few teams," he said.

India and Australia are the two sides with proper balance in each department, reckons Kohli.

"We, along with Australia, are probably the top two sides, as far as balance is concerned. Whether it’s relevant or irrelevant that’s for people to decide. But we as a team are excited to play Australia, in our conditions, to test ourselves against the best.

"But in the year of the World Cup, as many games we play, it is going to benefit us, especially white-ball cricket. From that point of view, we are looking forward to play this series," he signed off.