Kohli was full of praise for all his players but singled out Ravindra Jadeja and Yuzvendra Chahal for their efforts. 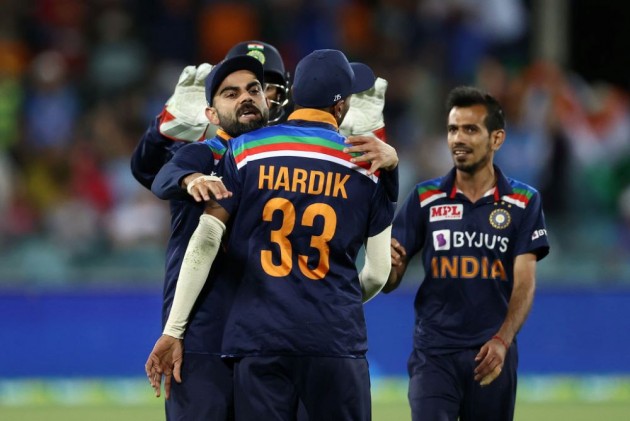 India captain Virat Kohli was quite pleased that the concussion substitute rule worked out well for his side even though there were no plans to play Yuzvendra Chahal, who proved to be a match-winner after replacing Ravindra Jadeja in the first T20 International against Australia here. SCOREBOARD | TOUR SCHEDULE | NEWS

Chahal turned out to be the perfect concussion substitute after an injured Jadeja did his part with the bat in India's impressive 11-run victory.

While Jadeja smashed an unbeaten 44 off 23 balls to propel India to 161 for 7, his head injury allowed India to unleash Chahal (3/25 in 4 overs) on an Australian side caught completely off-guard.

"There were no plans of having Yuzi (Chahal) in the game. Jaddu (Jadeja) got a knock on the side of the head and was a bit dizzy and still is," Kohli said in the post-match presentation.

"Concussion replacements are a strange thing, today it worked for us maybe another time he wouldn't have found a like-for-like," he added.

Kohli was full of praise for all his players but singled out Jadeja and Chahal for their efforts.

"He (Chahal) came in and bowled really well. The pitch offered him enough. Yuzi showed character to squeeze the opponents. I thought they had a great start. They were cruising. The batters offered us a few wickets. That is T20 cricket for you," he said.

"In Australia, you need to play hard and show intensity till the end. He (Jadeja) batted beautifully in the last game. Natarajan looks like he can improve a lot. (Deepak) Chahar bowled well as well. Chahal got us back in the game. Hardik's catch was a game-changer as well."

Earlier, just before the start of Australia's chase, home team head coach Justin Langer was seen having an animated conversation with match referee David Boon on the sidelines even though it was not known whether it had anything to do with the decision to allow Chahal as a concussion substitute.

But Australia skipper Aaron Finch preferred to play it down when asked about the concussion substitute at the post-match presentation ceremony.

"Their doctor had ruled Jadeja out with concussion and you can't be challenging a medical expert'sopinion  in that regard," he said.

"We probably leaked a few too many runs at the end and then in the middle phase struggled to heat boundaries."

Finch informed that he suffered an injury during the match and the extent of the damage would only be known after scans.

"Bit of a hip or glute, we'll wait and seem it progressively got worse throughout the game," he said.

Man-of-the-moment Chahal said having not made the original playing eleven, there was no pressure on him when he came on as a concussion substitute.

"There was no pressure for me when we were batting and then suddenly I got to know I was going to play. I have played so many games so I was mentally fit," he said.

Chahal said after a below-par outing in the ODI series, he picked up ome tricks from rival leg-spinner Adam Zampa on how to bowl effectively on Australian wickets.

"I learnt from my ODI mistake. In ODIs, I flighted the ball a lot but here I just saw the way Zampa bowled, I tried to do the same as well.

"It was a little harder to score in the first innings. 150-160 is a good score on this wicket. I bowled according to my plans," he said.