The young Turks of the Indian cricket team came to the party in all four Test matches against England. Here are the statistical highlights of the India vs England series 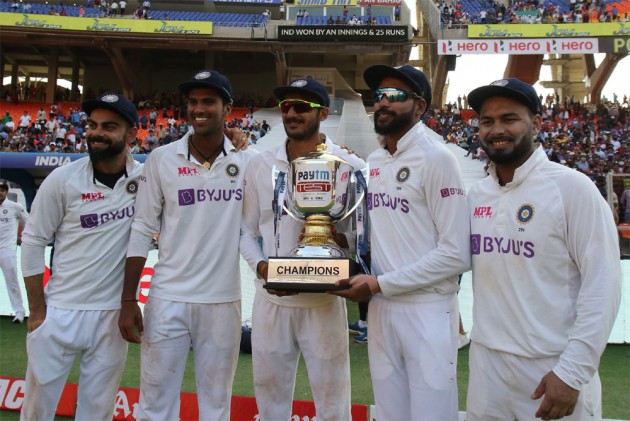 India showed England no mercy as they wrapped up an innings victory in the fourth Test and a 3-1 series triumph behind another mesmerising display from Axar Patel.

The relentless Indian spin cycle has left England a ragged shadow of the team that coasted to a 227-run win in the first Test, and it was fitting the series should end with Axar and Ravichandran Ashwin running amok, taking five wickets each at the Narendra Modi Stadium in Motera.

The third Test was a two-day shock to the tourists' senses, while England headed into day three of this latest match in Ahmedabad knowing it would take something special to stave off one final heavy beating.

Test newcomer Axar Patel and Ravichandran Ashwin have tortured the England batsmen in this series, and they were again the destroyers in a total of 135 all out, Axar with 5-48 and Ashwin taking 5-47 to nail down the win by an innings and 25 runs.

From 294-7 overnight in their first innings, leading by 89 runs, India scuppered English hopes of a quick burst through the tail as Washington Sundar and Axar led them to 365, at which point England finally took the three wickets they had been craving.

Here are the statistical highlights:

** India recorded their fourth-biggest win against England by winning the fourth and final
Test match by an innings and 25 runs at Ahmedabad on Saturday (March 6).

** A comprehensive 3-1 series victory over England has confirmed India's spot in the final of
the inaugural World Test Championship, where they will meet New Zealand. The WTC final is
scheduled between June 18 and 22 at a yet-to-be-named venue in England - the ICC is expected to make the final call soon.

** Washington Sunder recorded his highest score in Tests by making an unbeaten 96 in 262
minutes off 174 balls with 10 fours and one six. His previous highest was 85 (not out) in the
first Test match of the series at Chennai.

** Ravichandran Ashwin took 32 wickets in the series and joins the great Sydney Barnes as the
the only bowler to twice take more than 30 wickets in a series of four matches or fewer.

Ravichandran Ashwin took 31 wickets in the four-Test series against South Africa in 2015-16.