A determined India fought back from 1-3 down to beat Germany 5-4 in the men's hockey bronze medal match at Tokyo Olympics. Follow live updates here 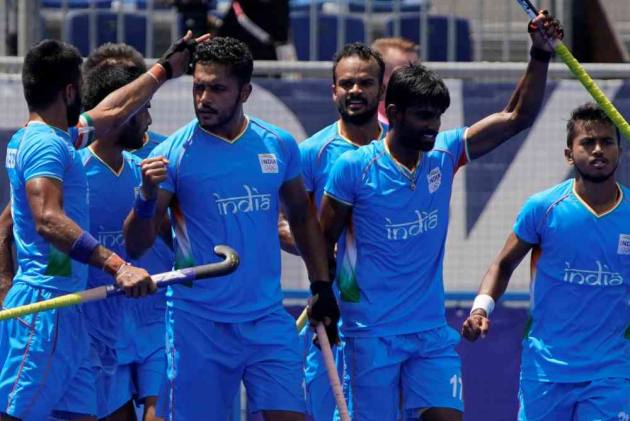 India hockey back with a back. A determined India on Thursday fought back from a 1-3 down to beat the second most successful side in Olympics hockey 5-4 in a thrilling bronze medal match at Tokyo Olympics. And with that, the most successful hockey nation ends its medal drought -- their first in more than four decades. Follow here Tokyo Olympics hockey live scores between IND vs GER.

Seconds left in the match. Germany with the last chance and win a long corner. Then, another PC for Germany. And Sreejesh saves it as India celebrate. First medal in 41 years.

The so-called overload from Germany. And India are in deep defence. Despite that 10th PC for Germany. Dangerous ball as the ball raises from Rupinder Pal Singh's stick. Massive relief for India. And India on the counter. Win a free hit.

Germany are fielding 11 outfield players with no goalkeeper with less than five minutes left in the match.

Sreejesh produces a good save to deny the Germans. And free hit for India. Then, another free-hit just outside the German D. Medical attention as Sumit takes a trip inside the box. Nothing.

Seven minutes left in the match. Sideline hit for India. Nice interception from Germany. But India win the ball back. Then Germany win a PC.

What a miss. Amit Rohidas finds Mandeep Singh, who fails to beat the German goalkeeper one-on-one. Probably, the best chance of the match.

German captain Tobias Constantin Hauke, what have you done. Yellow for a nasty tackle. Germany one man down with 11 minutes left in the match. Dilpreet Singh fails to trap the ball and India lose a good chance, possibly, to increase the lead. Germany, on the counter, win a free-hit inside the Indian half.

A turn-over for desperate Germany and PC. Varun Kumar at fault, for footing. And Lukas Windfeder beats Sreejesh.

Players back for the final quarter. India 15 minutes away from an Olympic medal.

Rupinder Pal Singh with a brilliant tackle to deny Germany the fourth goal. And Surender Kumar clears the danger away.

Germany win a PC and India don't referral. Third PC on the trot. Nice variation and Lukas Windfeder almost finds the target. Big miss. Germany back to 11. And they continue to press hard.

... from the following play, India demand a referral as the ball hit one of the German defenders. Reviewed and it's a dangerous ball. India lose referral.

Nilkanta on the ball again. And India win as he finds the flailing foot of onrushing Lukas Windfeder. Back-to-back PC for India. Germans don't have referral. Graham Reid is fuming on the sidelines. And a yellow green card for Mats Jurgen Grambusch for excessive argument. Germany down to ten men. Another PC for India.

Nilkanta loses possession just outside Germany box and he demands a free-hit. Umpire not impressed. Germany, on the counter, earns a free-hit. Less than five minutes left in the match. And Germany makes a circle penetration from a move from the right.

Nice turn-over but Mandeep Singh fails to trap the ball at the top of the D. What a miss. India then keep the possession.

Now, India are playing like champions. Another move and another free-hit, and a goal. But the whistle was already blown. Not to be.

Then, from a quick counter, Simranjeet Singh produces a clinical finish to give India a 5-3 lead.

What a start to the quarter from India. A penalty stroke. Germans forced to take the referral against the call. Benedikt Furk was seen pushing Mandeep Singh at the back.

And Germany lose the referral. Rupinder Pal Singh to take the stroke. To the right, and he scores. India take lead for the first time.

Another PC and India find the third equaliser with a Harmanpreet Singh strike. 29th minute.

Simranjeet Singh wins a PC. A brief respite for India. Harmanpreet Singh arrives with the message from the coach. On the rebound, Hardik Singh finishes with a clinical finish. 27th minute.

Good spell for Germany. Back-to-back free-hits. India win back the possession and starts a move. But the Germans win back the ball and Niklas Wellen beats Sreejesh with a reverse flick from a Christopher Ruhr move. 27th minute!

Germany, who have slowed down, still find enough pace to beat Indian defence and Martin Detlef Zwicker goes for a tomahawk and tests Sreejesh.

Second-quarter starts. Germany dominated the first quarter completely. India will need to find an answer very soon. India on the attack. But lose possession. Florian Fuchs makes a circle penetration. India then launch a counter. Simranjeet Singh, centre of the D, and scores the equaliser with a tomahawk. Nice through from Nilakanta. 17th minute!

Extended first-quarter finally comes to an end. Lukas Windfeder tries with a variation. But the umpire calls for obstruction.

Vivek Sagar Prasad wins a tight tussle but Mandeep Singh wastes possession just outside the German D. Free hit from the following play. Bodies inside the box. And India come close to hitting the target. On the counter, Sreejesh once again saves India with a brave one-on-one challenge. And Germans take the referral from a goalmouth melee. Jan Christopher Ruhr's bid vindicates, as replays show Rupinder Pal Singh foot faulting. Time over but PC will be taken. Another PC and, another one. Another referral for Germany.

Umpire deems it a dangerous ball. Rising ball. But Germans win another PC.

Germans are operating at a different level. Dilpreet Singh clears the danger away. But India still trying to find a way to beat this very tight German defence.

Germany still enjoying their domination. Yet another circle penetration. And a dangerous cross. All it needed was a slightest of touches, a deflection to beat Sreejesh.

Dominating run from Jan Christopher Ruhr. But India somehow cut shot his run inside the D. India keep the possession and launch an attack.

On the counter, Mats Jurgen Grambusch forces Sreejesh to leave the line and block the shot.

Back-to-back PCs for India, but Rupinder Pal Singh sends the second one over the bar. Germany, on the counter, get a dangerous-looking move.

Man advantage for India. Green card for Constantin Staib for pushing. Manpreet Singh to the fore and India win the first PC from the first circle entry.

Strong start from the Germans. Back-to-back long corners and they have taken the lead, inside the second minute from the set-piece. Samsher Singh faults to clear the danger and Timur Oruz with the goal.

6:54 AM IST: Players are ready for the match. National anthems coming up...

The Indian men's hockey team aims to finish on a happy note at Tokyo 2020. The agony of winning nothing in the last 41 years has been killing the eight-time Olympic champions and at Tokyo Olympics, India have shown the caliber to finish on the podium again. In its path to glory is Germany, who are always a hard nut to crack. Interestingly, India's last bronze medal came at Munich 1972. India's last Olympic gold came at Moscow 1980.

The India vs Germany Tokyo Olympics bronze medal clash will be a match-up between current world No. 5 (IND) vs world no. 6 (GER). Interestingly, the final between Australia vs Belgium will be a clash between world No. 1 (AUS) vs world No. 2 (BEL). The Belgians, who defeated India 5-2 in the semifinals, are the World and FIH Hockey Pro League champions. Germany lost 3-1 versus Australia in the other semifinal.

India have scored 20 goals and conceded 19 goals at the Tokyo Olympics so far. Germany are slightly ahead with 23 goals scored and 14 conceded. Both have played seven matches each.

Lukas Windfeder has scored six goals, the most for Germany at the Tokyo Olympics. Drag flicker Harmanpreet Singh, with five, has been India's best. At Rio 2016, Christopher Rühr’s last-minute goal helped Germany edge India out 2-1 in a group match. Ruhr has scored three field goals in Tokyo 2020 and will be a marked man in the Indian defence.

7:08 AM IST: Third-quarter - India 3-3 Germany
What a start to the quarter from India. A penalty stroke. Germans forced to take th referral against the call. Benedikt Furk was seen pushing Mandeep Singh at the back.
And Germany lose the referral. Rupinder Pal Singh to take the stroke. To the right, and he scores. India take lead for the first time.