India women's hockey team fought back from 0-2 down to take 3-2 lead, but ended up losing the bronze medal play-off to Great Britain at Tokyo Olympics. Catch highlights here 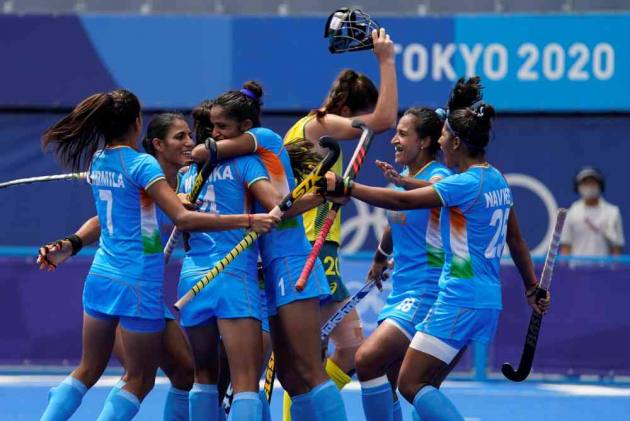 It's over. India lose the bronze medal match. Third back-to-back medal for Great Britain. Bronze in London, gold in Rio and bronze in Tokyo.

India lose referral. And no PC, but India keep the ball. Then, Great Britain launch a counter and they are happy to keep India busy in their half.

India keep pressure on. Salima Tete wins on the run. One Great Britain down after getting hit on the head by the deflected ball from Tete's hit. Then, India take a referral for the dangerous ball. Rising

Ball hit the foot of one of the Indian players. And normal play resumes. India attack again. Switches flanks from left to right. Nice stick work from Salima Tete to win a free-hit. But Hannah Martin up to the task as GBR thwart the Indian attack. Final cooling break.

Despite a player down, India keep the pressure on and win their seventh PC. Great Britain challenges. Looks like Leah Wilkinson deliberately pushes the ball out of the play, beyond the byline. And it's a PC. Gurjit Kaur on the field.

Less than ten minutes left in the match. India win a free-hit inside their own half as one GBR player carried. India then lose possession inside the attacking half. Udita is back, then Nisha Warsi gets a green card.

Back-to-back PCs for Great Britain. Another one. Another one, and this time, GB breach Indian defence. Between the legs of Savita Punia. Third goal for Grace Balsdon in Tokyo 2020.

One player down and India face flurry attacks from Great Britain. Carry by Salima Tete and PC for GB.

Final 15 minutes and, within seconds in the fourth quarter, India concede a PC. Udita crashes into an attacking Great Britain player inside the D. Yellow for Udita.

And what a brave rush. Nisha Warsi copes one, one for the team. India saved.

Good spell for India. But fail to make an impact. Great Britain, while, continue to make circle penetrations. Seconds before the end, Savita Punia saves another. India, then on the counter, win a long corner and forced the umpire to check for PC from the following play. Ball hits the foot of one of the GB players at the second post. Gurjit Kaur not on the pitch. India waste the PC.

And it's the end of the quarter.

Aert and blessed. Savita Punia once again leaves her line to save the team. Good goalkeeping, diving to her left to deny Izzy Petter. Another save to deny.

After a brief cooling break, both the teams ready for the remaining seven minutes in the quarter. Great Britain, after scoring their third goal, are once again in the ascendency. Back-to-back attacks.

India launch a quick attack. And win a PC for a body check inside the D. But Great Britain defend well.

Great Britain still with the ball. And Savita Punia to the fore with another brilliant save. But she's beaten, to the right. Double check by the umpire. It's given. Goal for Great Britain captain, Hollie Pearne-Webb.

And Great Britain get the first PC from the first chance they get in the quarter as one of the Indian players raises the stick to the dangerous level. Monika Malik, the last man on the line, does well to clear the danger away.

Third-quarter on. Momentum with India. And they are showing confidence, keeping the ball, asking Great Britain to chase.

It seemed like Great Britain players have seen a ghost in Tokyo. They took a two-goal lead, dominated the game, creating chance after chance. Then, the defending champions stopped playing. Savita Punia, under the bar, produced at least four saves of the highest class to keep India in the match and came Gurjit Kaur, who else! Two conversions from PCs and a poaching goal from Vandana Katariya.

Seconds left in the quarter. And India happily run down the clock.

What a comeback. Down 0-2, India hit back with goals from Gurjit Kaur and Vandana Katariya.

And what. India's persistence in the last couple of minutes pays off. And takes the lead with a scrambled goal. Check for carry.

It's a goal for Vandana Katariya.

What a run from Salima Tete. One of the best. India win ball back just outside the D, and Salima beat at least four Great Britain players and win a PC.

And from it, Gurjit Kaur scores. She beats Maddie Hinch to the left again. Four goals so far for Gurjit, and all in knock-outs.

India win their second PC. Then, another. And Gurjit Kaur makes it 1-2 for India with a cracking drag flick.

Stunning goal from Sarah Robertson. England star produces a tomahawk and there's no stopping that bullet.

Desperate defending from India. England, probing the Indian defence, using the switch to good effect and the move ends with off the target attack. Nisha Warsi gets a green card for a poor challenge, just outside the Indian D.

India yet to create a chance, but Great Britain got three in the first 15 minutes including one PC. And soon, they take the lead with a brilliant field goal after attacking the baseline. It's an own goal. But the goal for Elena Sian Rayer, the last attacking player.

Sarah Robertson running the show in the midfield as Great Britain dominate India. Minutes ago, Savita produces brilliant footwork to clear the danger away with a well-timed, well-directed kick with her left foot.

And it's the end of first-quarter. So far, so good for India. But the defensive line looks leaky and uncertain.

Another Great Britain move, this time from the right flank. And Savita in action again.

Every time Great Britain get a move, they are testing Indian defence. Yet another circle entry and Savita Punia saves India with some brilliant goalkeeping.

Poor game from Nikki Pradhan to allow Great Britain to launch an attack. And PC, second for England, courtesy a Navneet Kaur mistake. But relief for India.

England win the free-hit just outside the Indian D. ANd India induce a foul. Brilliant runs from Sharmila and India having a good spell.

Fiona Crackles sends the ball over the bar. India yet to get their first circle penetration. And they continue to press hard. And India are pushing bodies forward. But England win the possession back. A slow start to the match.

India's first and Navneet Kaur, who got injured in the previous match, produces a fine run down the right flick. Great Britain win the ball back and the first PC of the match.

Great Britain, in reds, start the proceedings. India in blues.

6:50 AM IST: Players and match officials are ready for the showdown. National anthems. Great Britain first...

The women’s hockey gold medal match will see hot favourites the Netherlands taking on Argentina. The Dutch are now just one win away from being in possession of the World, European, FIH Hockey Pro League and Olympic titles. However, they are not expected to have everything their own way against Las Leonas. Fascinatingly, Argentina were the last team to beat the Netherlands, inflicting defeat on the Dutch during their FIH Hockey Pro League encounter in Buenos Aires in February 2020, with the Oranje claiming a 3-1 victory the following day.

Indian women's hockey team will seek revenge for their 4-1 defeat at the group stage against Great Britain at Tokyo 2020. Having surprised Australia in the quarterfinals and lost a close contest against Argentina in the semis, this is a vastly different Indian women's team. After Indian men finished on the podium, the girls will look to go full steam against Great Britain, a team they have beaten in February last year.