India Vs Nepal, SAFF Football Championship Final, Live Streaming: When And Where To Watch 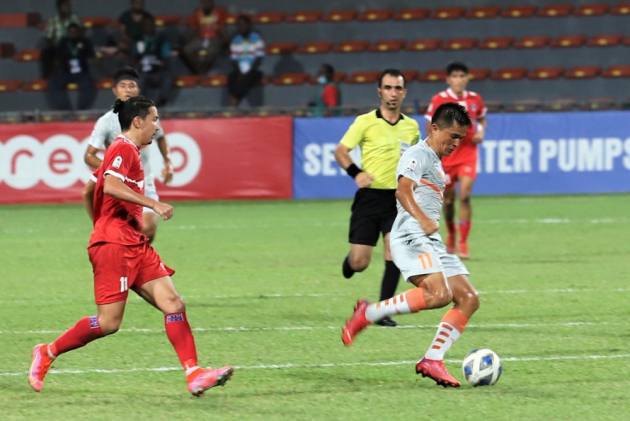 The draws against lower-ranked Bangladesh and Sri Lanka left India fighting for survival in the five-team tournament. But skipper Chhetri once again turned saviour for Igor Stimac's men, scoring the lone goal in the must-win match against Nepal. It was followed by a brace in their 3-1 win against hosts Maldives in the virtual semi-final.

In the process, Chhetri, 37, became the third most-prolific scorer among active footballers with 79 goals. He's only behind two of the greatest players who have played the game --Portugal's Cristiano Ronaldo (115) and Argentina's Lionel Messi (80). In fact, Chhetri can overtake six-time Ballon d'Or winner Messi with a brace against Nepal.

India have never failed to appear in the final, except the 2003 edition in Bangladesh. And with a win against Nepal on Saturday, India can actually mend some broken hearts too. A young Indian team lost to the Maldives in the final of 2018 edition in Dhaka. The then head coach, Stephen Constantine bravely rested both Sunil Chhetri and Gurpreet Singh Sandhu.

On Saturday, India will miss Farukh Choudhary, who suffered an Anterior Cruciate Ligament (ACL) injury during the round-robin match against Nepal.

For Nepal, it will be a new experience. They have never played in a SAFF Championship final. Their best run in the tournament was in the inaugural edition (1993) when the Gorkhalis finished third in the four-team competition. They have since reached the last-four stage in 1999, 2011, 2013 and 2018.

Nepal have so far scored six goals as against India's five, with Anjan Bista contributing with two. Besides the 23-year-old forward, Nepal have capable players in Suman Lama, Ayush Ghalan and Manish Dangi.

In May, the All India Football Federation (AIFF) extended Stimac's tenure until September 2022 but the Croatian's position remains untenable with a series of poor results against lower-ranked teams.

For Abdullah Almutairi, the final against India will be his last match as Nepal head coach. Kuwaiti said that he "will never come back to Nepal." Apparently, Almutairi is not happy with the life in the Himalayan Kingdom and claimed that the media is "attacking him".

Also, there was an episode between the two coaches during Nepal vs India, round-robin match. Stimac broke into a dance after Chhetri's match-winning goal. But it didn't go down well with Almutairi, who termed the Croatian's jig "shameful". And Stimac hit back, asking "I’m not sure what's wrong with my celebration. Can you tell me?"

Stimac will be absent from the touchline though, after his send-off during the Maldives clash.