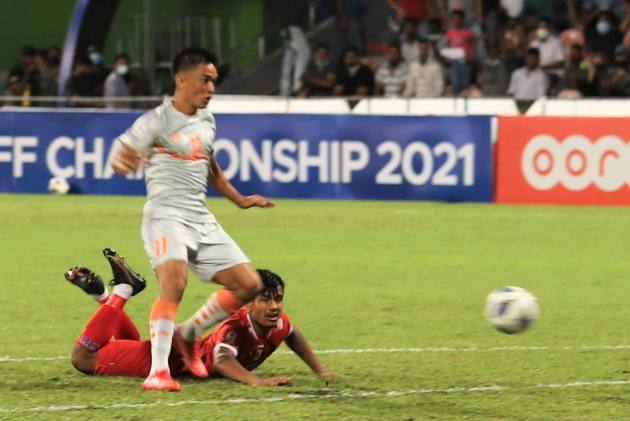 India finally showed their might by taming a spirited Nepal in the final of the 2021 South Asian Football Federation (SAFF) Championship on Saturday. Days ago, India were looking down the barrel after playing out draws against lowered-ranked Bangladesh and Sri Lanka. But on a rainy day in Male, Maldives, India survived an open first-half to beat maiden finalists Nepal with three second-half goals and once again established their supremacy in South Asia. (More Football News)

With both the head coaches -- Igor Stimac and Abdullah Almutairi -- suspended, there was little action on the touchline, a rare sight in present-day football. But the players kept the few thousand who have gathered to witness the regional talent engaged, with India skipper Sunil Chhetri once again stealing the show with a veritable performance.

As expected, India dominated possession in the first half but failed to break the deadlock. The 37-year-old opened the scoring soon after the break with a simple header from a Pritam Kotal delivery in the 48th minute. And within seconds, young Suresh Wangjam drilled one through the Nepalese defence from a Yasir Mohammad run to make it 2-0.

With the opener, Chhetri joined Argentine superstar Lionel Messi as the second-highest goal-scorer among active players. They now have 80 international goals each, only behind Portuguese goal-machine Cristiano Ronaldo (115).

India continued to dominate the match in every aspect of the game. But Nepal tested Indian goalkeeper Gurpreet Singh Sandhu more than a couple of times.

Sahal Abdul Samad then scored a stoppage-time goal in the 90th minute to seal the game as India win the SAFF Championship title after losing the previous edition to the Maldives.

India have had 65 per cent possession to go with 19 attempts.

The win also helped Stimac become only the third foreign coach, after Jiri Pesek (1993) and Stephen Constantine (2015), to clinch the title with the Indian team.

But more importantly, the win will help calm frayed nerves in India after the team's poor results in recent outings.

In the round-robin meeting, India had defeated Nepal by a solitary Chhetri goal too. The final was the 12th for India in 13 editions.