In a heartbreaking defeat, India lost to Oman in their 2022 FIFA World Cup Qualification opener. Sunil Chhetri scored for the hosts, while Rabia Alawi Al Mandhar scored a brace for the visitors in Guwahati's Indira Gandhi Athletic Stadium. Catch the highlights of IND Vs OMA here. 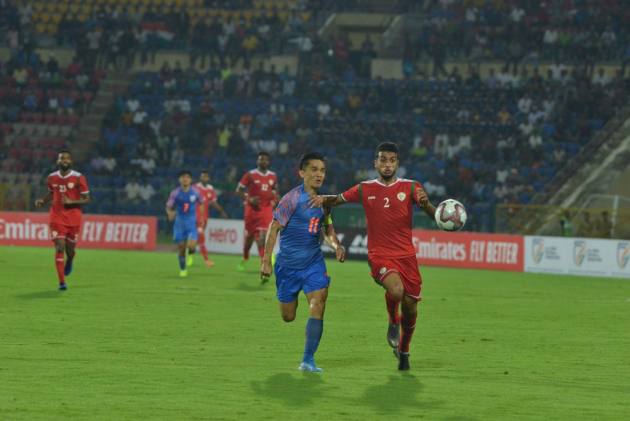 Another FIFA World Cup qualification campaign, and another defeat for India. The Blue Tigers suffered a heartbreaking loss Vs Oman in their opening 2022 WC qualifier, at Guwahati's Indira Gandhi Athletic Stadium. In what looked to be a promising clash, the hosts grabbed an early lead via none other than Sunil Chhetri, and looked set to win the match. After a flurry of missed chances, Igor Stimac's side were on the receiving end of individual brilliance by Rabia Alawi Al Mandhar, who scored two goals for his side in the last ten minutes. Catch the highlights of IND Vs OMA here.

Two goals from Al Mandhar sealed the deal for Oman. This match is somewhat reminiscent of India's 2019 AFC Asian Cup performance. Back then too, the Blue Tigers created plenty of chances, but nerves got the better of them.

The hosts were well in this game, but couldn't find that extra something to prevent Al Mandhar from scoring a brace.

9:22 PM IST: 92:09' India will be heartbroken with tonight's lead! They could have been level or have atleast scored three goals.

Can they find the equaliser?

Substitution for India. Samad comes in for Bose.

OMAN GRAB THE LEAD AND WHAT A FINISH!!!

Al Mandhar just cuts in from the left, and fires a missile past Gurpreet. Stimac just can't believe it, heartbreak for India! Poor defending!

9:15 PM IST: 85:46' Great opportunity here for Oman to grab the lead, but its Sandesh who comes to India's rescue, and makes a crucial block inside his box. Good defending!

Manvir puts in a good cross for Chhangte, with the latter inches short of putting it in the back of the net.

A great chance and a great goal for Al Mandhar. Good news for Oman, but bad news for India. Game on, Oman are back into the game, and only time will tell if they can grab a victory tonight.

9:09 PM IST: 80:00' India are in a great position right now. If they can hang on to this lead, it could be a big turning point in the Blue Tigers' World Cup qualification phase.

Excellent work by Ashique, who just oozed confidence. The midfielder didn't have a pre-season and was out of practice due to injury. But what an outing it has been for him tonight!

Gurpreet does good with the save! India are still with the lead, and a big save by the big man! Also, he should be thanking Bheke for clearing it.

Thapa should have done better, he gave Ghafri too much of space to shoot towards India's goal.

India have the lead, and home fans have gone crazy now with their flashlights shining everywhere.

Can the Blue Tigers hold onto their lead and win the match?

It was an amazing through ball from Chhetri which slotted him near the Oman box, but the youngster tried to cut in from the left and shoot it via his weak right foot.

Kuruniyan tries to wriggle his way past two Oman defenders inside their penalty box, but goes down. The referee ignores it and waves for play to go on.

8:49 PM IST: 60:10' Igor Stimac is implementing his tactics according to the match. Chhangte's arrival slots Kuruniyan into the midfield base, with the Mizo winger playing on the left flank. He has got raw pace to burn, and could hurt Oman in the counter.

WHAT AN AMAZING BALL BY THAPA TO CHHETRI!

He lobs it from the left flank for Chhetri, who only has one defender with him. But the pass lacked a little bit of power and gets cleared easily.

8:45 PM IST: 55:55' Offside to Oman. The visitors were looking confident with the ball, and were rushing towards the box. Aziz has been causing all kinds of problems against India.

It was about to be an own goal by Anirudh Thapa, but luckily the ball went way too high. A cross had come in from Oman's right-wing, with Thapa putting his body in front.

8:38 PM IST: 49:29' India is looking to get past the Oman defence. The visitors were a little easy while defending in the first half, with the Blue Tigers taking advantage of it with much aplomb.

8:34 PM IST: 46:00' And the second half kicks off. Substitution for Oman. Al Ghassani replaces Saleh.

8:27 PM IST: HT' Fantastic performance by Indian in the first half.

Sunil Chhetri has just been amazing for home side, while Kuruniyan and Thapa have been equally fantastic.

Also, Gurpreet's save could decide the match, that is India win. It should have been Oman's equaliser.

What an amazing first half by India, courtesy of a Sunil Chhetri goal.

The Blue Tigers could have scored more than a goal, but poor luck prevented so.

Also an amazing save by Gurpreet in the dying stages of the first half, otherwise Oman would have leveled the score.

A looping cross comes in for Al-Mahaijri, who heads it from point-blank range, but Sandhu saves it!

8:12 PM IST: 40:19' A cheap foul conceded by Sandesh in the middle of the park. That wasn't needed. India has the lead, pressure is not needed!

8:10 PM IST: 38:43' Good interception by Borges. Oman were trying to build from the back, but the Goan stopped any such thing from happening.

8:09 PM IST: 37:03' Poor freekick from Oman. It goes straight into the Indian wall consisting of only Anirudh Thapa.

8:07 PM IST: 34:56' When the fixtures were laid out, Oman thought that they were handed an easy start. Atleast they didn't receive Qatar.

But at the Indira Gandhi Athletic Stadium, India currently lead by a goal-to-nil, courtesy of a Sunil Chhetri strike.

8:05 PM IST: 32:29' Sunil and Kuruniyan are doing some amazing work with and without the ball. The duo are interchanging positions as to who plays in the hole. Amazing tactics from Igor Stimac. Udanta will need to step up his work.

Even Thapa is slowly cementing himself into the middle of the park. These exquisite balls are just oozing out of him.

The Indian captain was just left alone inside the opposition box and had enough time to rifle the ball into the net.

8:01 PM IST: 29:35' You can see few Oman substitutes already warming up! This could turn out to be embarrassing for them, if they lose to Igor Stimac's side.

Thapa slots in his freekick straight at Chhetri, who is near the penalty spot, and just hammers it past a crowded box, and it goes right into the back of the net!

Freekick to India and a yellow card to the Oman defender!

India has created multiple chances and could have led by a goal by now but looks like lady luck has other plans!

What an excellent corner by Thapa. He finds Sandesh in the Oman box, but the defender heads it way too high!

Another chance for India, but no goal!

ALMOST A GOAL, BUT THE CROSSBAR PREVENTS IT! A REPEAT OF ASIAN CUP??

It was a poor goal kick by Oman, with the ball falling for Thapa in the middle of the park. The midfielder let in a good ball. Chhetri and Udanta combined well, only for the latter to miss it!

7:45 PM IST: 11:45' Excellent ball floated in by Thapa towards Chhetri, but the goalkeeper gets to it before the Bengaluru man.

7:40 PM IST: 8:00' Oman are seeing more of the ball now. India need to stay patient, defend deep and play on the counter. India are doing some good work off the ball, denying space to their opponents.

The Blue Tigers are playing some quick football, with some slick passes. Although, it will only be sometime, when we Oman gain control and dominate possession.

Can the Blue Tigers grab all three points?

7:24 PM IST: Both starting XIs are walking into the field.

An exciting encounter awaits us all!

Understandably, the visitors start as favourites with a better head-to-head record. India and Oman have faced each other seven times, with India winning just once compared to Oman's four.

7:13 PM IST: India received a direct entry into Round 2 of the qualification phase due to its participation in the AFC Asian Cup. Placed in Group E, India have been placed alongside Qatar, Oman, Bangladesh and Afghanistan.

7:10 PM IST: The Blue Tigers will probably go with a 4-3-3 formation. We can expect Bheke and Bose to be used as wingbacks. Rowllin will be the defensive holding midfielder, with Thapa and Brandon on either side of him. Upfront, Chhetri will be the main striker, with Udanta and Ashique on either flank.

Although the biggest surprise is Sahal Abdul Samad's exclusion from the starting XI. The playmaker is a Stimac favourite, but his less physical stature could have led to his seat in the bench.

7:05 PM IST: Well, it looks like Igor Stimac is trusting his guts. In goal, Gurpreet Singh Sandhu was a pretty obvious choice. Same goes to the defence. The question lies in midfield. Rowllin Borges has hardly been tried by Stimac and was dropped for the King's Cup too. A big test for the Goan midfielder! Anirudh Thapa and Brandon Fernandes will need to use their creativity and will be the team's vision when going forward.

Also, Ashique Kuruniyan's inclusion comes as a surprise after missing out on international action since the AFC Asian Cup. Sunil Chhetri and Udanta Singh's inclusion had to happen. They are our main attacking threat.

Looking to lead by example, Sunil Chhetri on the eve of the match said that the Indian football team is "fit and hungry".

6:40 PM IST: A quick look at Indian team dressing room ahead of the crucial clash

Stimac hasn't been able to identify his starting defenders yet, having rotated them in every match. Also, the Blue Tigers have conceded 13 goals in their last five matches. Metronome young midfielder Amarjit Singh Kiyam has been ruled out due to injury after having cemented a permanent starting slot in the base of India's midfield.

Meanwhile, Oman will be relying on Ahmed Mubarak 'Kano' and Abdulaziz Al Muqbali. Kano is Oman's pillar. The defensive midfielder has even scored against India in the past. His box-to-box playing style will be a huge threat to India's young midfield. Meanwhile, Al Muqbali will lead his side's strikeforce and Sandesh Jhingan will have his hands and legs full