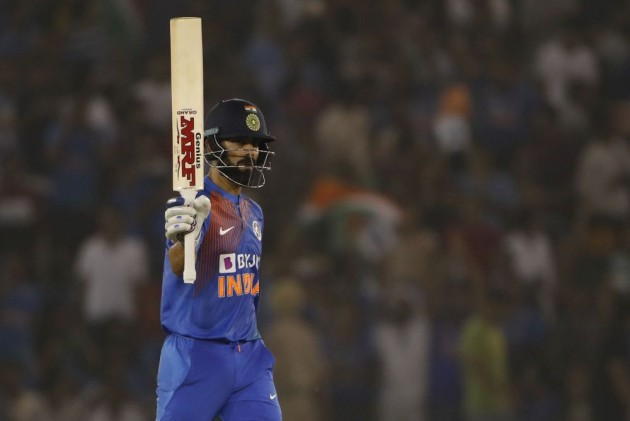 India defeated South Africa by seven wickets in the second T20 in Mohali on Wednesday (September 18). After being asked to bat first, the Proteas were restricted to 149/5 despite impressive knocks from skipper Quinton de Kock (52) and Temba Bavuma (49). For India, Deepak Chahar took two wickets, while Navdeep Saini, Hardik Pandya and Ravindra Jadeja grabbed a scalp each. In reply, the hosts rode captain Virat Kohli's unbeaten half-century (72) and opener Shikhar Dhawan's 31-ball 40 to seal the deal with an over remaining. The third and final T20 will take place at the M Chinnaswamy Stadium, Bengaluru on Sunday (September 22). Get highlights of India vs South Africa, 2nd T20 here (SCORECARD | BAN v ZIM HIGHLIGHTS | CRICKET NEWS)

Virat Kohli, Player of the Match - "Slightly different pitch. That's always going to be a sweet memory, but this one's nice as well. Bowlers showed lot of character. The pitch was very good and they got off to a good start so it was an outstanding effort from the bowler to pull the game back from us. That's exactly what we're looking at, try out new people and see who stands up under pressure. (On his consistency) It's the badge in front of my shirt. It's a pride to play for my country so whatever it takes to get over the line, I will do. Get the team across the line anyhow. If you want to make your team win, you'll find a way."

22:16 hrs IST: FOUR! That's it. Full from Fortuin, Iyer drills past the long-on fielder as the hosts register an emphatic seven-wicket victory. Kohli remains unbeaten on 72.

21:58 hrs IST: OUT! Horrible shot selection from Pant. Fortuin errs in line, the Indian could have hit it anywhere but picks out the man at short fine leg. Batting coach Vikram Rathour doesn't look a happy man. Shreyas Iyer comes to the crease. India are 105/3 after 14 overs. Kohli 41*

21:48 hrs IST: OUT! An outstanding catch by Miller at long-on. It was heading for a boundary until Miller, at long-on, dived to his right to complete a super one-handed catch. Killer Miller - they say it right! Rishabh Pant comes to the crease. India are 96/2 after 12 overs. Nortje comes back into the attack.

21:43 hrs IST: SIX! Fuller delivery from Fortuin, and Dhawan slog-sweeps it deep into the mid-wicket stands for a maximum. Was right in the slot for Gabbar. India are 89/1 after 11 overs. Dhawan 39*, Kohli 32*

21:34 hrs IST: SIX! Length delivery from Pretorius, Kohli charges down the track and drives it inside-out over cover for a maximum. Expensive over from the South African, 15 off it. India are 72/1 after 9 overs. Dhawan 28*, Kohli 27*

21:11 hrs IST: OUT! Caught in front. Rohit looks to hit this into the legside with a flick, but misses and an easy call for the umpire. First wicket for Phehlukwayo. Virat Kohli comes to the crease. He didn't in the last over of SA's innings due to a back niggle. India are 33/1 after 4 overs. Dwaine Pretorius comes into the attack.

21:05 hrs IST: FOUR! Length delivery from Rabada, and Dhawan chops it down to third man. Nine off the over. India are 30/0 after 3 overs. Dhawan 15*, Rohit 12*. Andile Phehlukwayo comes into the attack.

21:00 hrs IST: SIX! Back of a length delivery from Nortje, Rohit gets into position early and pulls this over square leg for a maximum. Costly over from the South African seamer, 13 off it. India are 21/0 after 2 overs. Rohit 12*, Dhawan 6*. Rabada to continue

20:54 hrs IST: FOUR! Length ball from Rabada, Dhawan times it well over point for his first boundary of the night. India are 8/0 after the first over. Anrich Nortje comes into the attack.

20:49 hrs IST: Time for India's chase. Rohit Sharma and Shikhar Dhawan are at the crease. Kagiso Rabada to open the attack.

20:37 hrs IST: That's it. South Africa finish on 149/5. Two maximums, one each from Phehlukwayo and Pretorius. The visitors scored only 27 runs in the last four overs. We'll be back with India's reply.

20:30 hrs IST: OUT! Bowled him! Slower ball from H Pandya, full, and Miller looks to hoick over the leg side but misses. Andile Phehlukwayo comes to the crease. South Africa are 133/5 after 19 overs. Saini to bowl the final six balls.

20:24 hrs IST: OUT! This had to happen. Bavuma was put under pressure with a few dot balls. Slower delivery from Chahar, and Bavuma looks to hit it to cow corner but doesn't generate enough power and hands Jadeja an easy catch. Fine spell from the India pacer. Ends with 2/22. Dwaine Pretorius comes to the crease. South Africa are 129/4. H Pandya to bowl the penultimate over.

20:13 hrs IST: SIX! Flighted deliver from Sundar, Miller lofts it inside out over extra cover for a maximum. South Africa are 122/3 after 16 overs. Bavuma 47*, Miller 15*. Saini comes back into the attack.

19:58 hrs IST: WICKETS! Two excellent overs from India. Kohli's brilliance in the field has De Kock (52) back in the pavilion. Jadeja's superb return catch -- Rassie van der Dussen was the batsman -- has the Proteas in a spot of bother. David Miller comes to the crease. South Africa are 98/3 after 13 overs. Bavuma 36*. Krunal Pandya comes into the attack.

19:50 hrs IST: FOUR! Short from Jadeja, down leg, and De Kock whips it away to the deep backward square leg boundary. That's a half-century for him. What an innings! Can he get a big one here? South Africa are 87/1 after 11 overs. Navdeep Saini comes back into the attack.

19:38 hrs IST: SIX! Short delivery from H Pandya, Bavuma picks the length early and smashes it over deep square leg for a maximum. Expensive over from the Indian, 10 off it. South Africa are 55/1 after 8 overs. De Kock 38*, Bavuma 11*. Jadeja again.

19:33 hrs IST: Six singles off Jadeja's first. Would be happy as there were no boundaries scored. South Africa are 45/1 after 7 overs. De Kock 36*, Bavuma 3*. Hardik Pandya comes into the attack.

19:20 hrs IST: OUT! Fuller delivery from Chahar on the stumps, Hendricks looks to hit it over the mid-on fielder but doesn't get the timing and ends up toe-ending to Sundar who was at the edge of the circle. Debutant Temba Bavuma comes to the crease. South Africa are 31/1 after 4 overs. Sundar comes back into the attack.

19:08 hrs IST: FOUR! Poor ball from Chahar and Hendricks takes advantage of it. Straying down leg and and the Protea opener helps it to the long leg boundary. South Africa are 11/0 after 2 overs. De Kock 6*, Hendricks 5*. Navdeep Saini comes into the attack.

19:04 hrs IST: FOUR! De Kock gets off the mark in style! Full from Sundar, wide of off, the South African hits it through the covers. South Africa are 6/0 after the first over. De Kock 5*, Hendricks 1*. Deepak Chahar comes into the attack.

18:31 hrs IST: India have won the toss and have opted to field

18:11 hrs IST: Temba Bavuma, Anrich Nortje, and the two spin-bowling allrounders, Bjorn Fortuin and George Linde, are yet to make their T20I debuts. All might do so today.

17:42 hrs IST: Quinton de Kock on Virat Kohli vs Kagiso Rabada - "They're both good players in their own right. It's always going to be a good competition. They like being very positive in the way they play their cricket, and it could a great thing to watch."

STAT ATTACK - The PCA stadium has seen big T20I totals over the last few years. The lowest team total at the venue is 158/5.

17:14 hrs IST: With no rain on the cards, the series should finally get underway with an uninterrupted game. Dew is likely to play a part in the decision-making at toss.

17:11 hrs IST: Hello and welcome to Outlook's live coverage of the second T20 International between India and South Africa.