Former Pakistan captain Shahid Afridi took to Twitter to congratulate Virat Kohli, who helped India beat South Africa by seven wickets in the second T20I match lat Mohali, on becoming the only current player to average more than 50 in three formats of the game 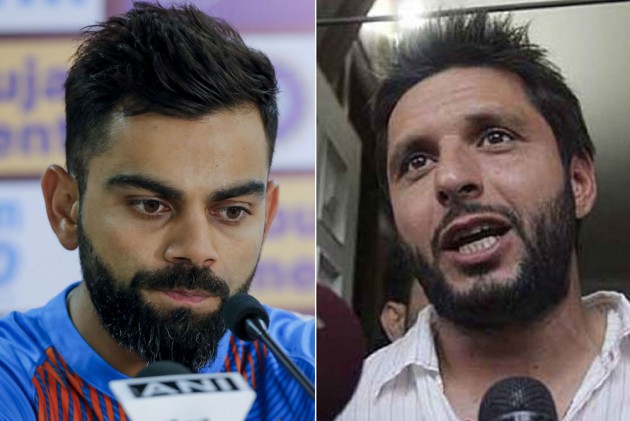 Virat Kohli continues to win new fans every day. After yet another match-winning knock against South Africa at Mohali on Wednesday, the Indian national cricket team captain forced legendary Pakistan all-rounder Shahid Afridi to come online and admit his admiration for a "great player".

Kohli played a brilliant knock of 72 runs from 52 balls to help India beat South Africa by seven wickets with six balls to spare in the second Twenty20 International. The 30-year-old subsequently won his 11th man of the match award in T20Is, thus equalling Afridi's feat. Only Mohammad Nabi of Afghanistan has won more MoM awards, 12.

Hailing Kohli's performance, Afridi retweeted an International Cricket Council (ICC) post which detailed Kohli's 50+ averages in all three formats of the game. And wrote: "Congratulations @imVkohli You are a great player indeed, wish you continued success, keep entertaining cricket fans all around the world."

Congratulations @imVkohli You are a great player indeed, wish you continued success, keep entertaining cricket fans all around the world. https://t.co/OoDmlEECcu

During his 52-ball knock, Kohli played some sublime shots, including this unbelievable flick for a six.

Kohli also became the batsman with most runs in T20Is, overtaking Rohit Sharma.

Meanwhile, Afridi, who was once known for his flambouyance, is seemingly busy launching a political career. To the majority of Indian fans, he is now former opener Gautam Gambhir's rival in the virtual world.