After Mohammed Shami starred on day five of the first Test, South Africa could be tempted to field an extra seam bowler in Pune 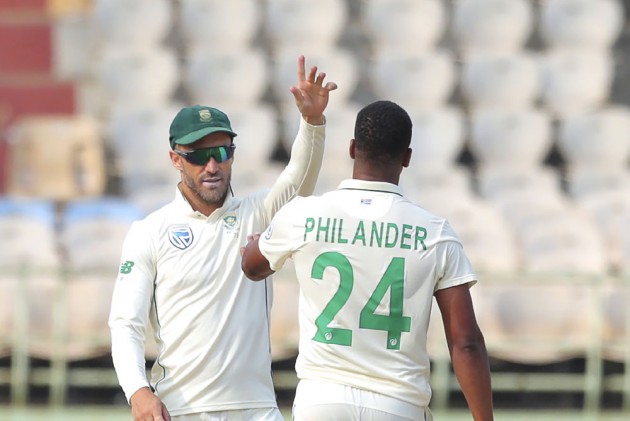 South Africa will consider adding an extra paceman to their attack for the second Test against India in Pune after suffering a 203-run defeat in Visakhapatnam.

Mohammed Shami took five of the nine wickets to fall on Sunday as the Proteas - requiring a notional 395 for victory - collapsed from 11-1 to 70-8 and were eventually dismissed for 191.

Prior to Shami's masterful exploitation of a wearing fifth-day pitch, there had been little assistance on offer for the seamers.

However, Lungi Ngidi or Anrich Nortje could be called upon by the tourists for next week's second Test, starting on Thursday, after spinners Dane Piedt and Senuran Muthusamy struggled to make an impact with the ball in support of fellow slow bowler Keshav Maharaj.

In a news conference, South Africa skipper Faf du Plessis said: "Apart from today [Sunday], seamers didn't play that much of a role in this Test match. They played a holding role in the first four days. Whether an extra seamer would have made a difference, I am not sure.

"But definitely day five, we saw that there was huge value in the seam, the up and down. It is something for us to consider moving into the next Test match."

Piedt and Muthusamy did at least impress with the bat, striking 56 and 49 not out respectively on the final day after the latter had also made an unbeaten 33 in the first innings of his debut Test.

Given Muthusamy was selected as an all-rounder rather than a frontline bowler, his position in the side looks more secure than that of Piedt.

Peidt has just brought up a milestone, he's reached 50 runs for the first time in tests.

2 key stats:
It's his highest test score
He & Muthusamy have the highest 9th wicket partnership for SA in tests between SA & India.#INDvSA pic.twitter.com/tE3B4TdVw2

"You can see technically he is very sound against spin, which is something he has worked really hard on," said Du Plessis of Muthusamy.

"Obviously he bowls a bit as well so that helps. Batting in that number seven or number eight position is always something we are looking for as a team.

"He batted with real maturity in both innings and is making it hard for us to leave him out of the second Test. He is putting the numbers on the scoreboard, which is what we want.

"It's about finding the balance - which are our best wicket-taking options? But also you definitely need to have one element of control in the sub-continent. Those are the conversations that we will have."