Shafali Verma (60) and captain Smriti Mandhana (48) shared 96 runs for the opening wicket to canter to an easy win with nine overs to spare. 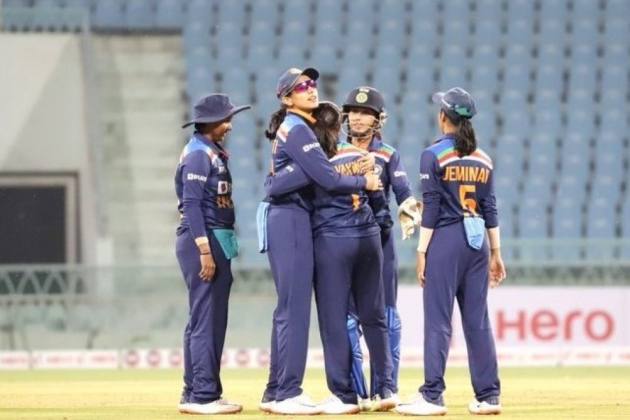 Gayakwad picked up three wickets for just nine runs to help India restrict South Africa Women to 112 for 7 and then Verma and captain Smriti Mandhana (48 not out off 28 balls) shared 96 runs for the opening wicket to canter to an easy win with nine overs to spare.

Shafali hit seven fours and five sixes during his blistering knock while Mandhana had nine boundaries in his unbeaten innings.

Chasing 113 for victory, the 17-year old Shafali went on a rampage from the word go by picking up 18 runs (3 fours and a six) off the first over bowled by Shabnim Ismail.

She kept attacking the opposition bowlers and smashed three more sixes in the next three overs, including two off Nadine de Klerk's second over.

The South Africa bowlers came in for severe punishment from Shafali as she produced a wide array of shots during her audacious hitting show.

Nondumiso Shangase ended the young Indian opener's knock by having her caught by Ismail in the deep in the ninth over. But by then, the match was as good as over in India's favour.
Mandhana, who was like a spectator when Shafali went on the rampage, showed her class by producing the final flourish, taking India to 114 for 1 in 11 overs.

Earlier, Gayakwad (3/9) was the star performer as she bowled with great control and guile to flummox the South African batters while fellow slow bowlers Radha Yadav (1/24) and Deepti Sharma (1/22) chipped in with impressive displays.

Skipper Sune Luus was the top-scorer for South Africa with 28 while Lara Goodall finished with 25 not out from 17 balls after they were asked to bat.

Sinalo Jafta (16) and Goodall, one of the stars of the ODI series win, took 16 runs in the 17th over bowled by medium-pacer Simran Bahadur to help the visiting side get past the 100-run mark.

The Indian bowlers justified skipper Smriti Mandhana's decision to bowl by picking up two wickets in the powerplay, including that of the consistent Lizelle Lee (10).

Gayakwad did most of the damage to the South Africans by removing Anneke Bosch (0) with the third ball of her first over. Then, she had the prize scalp of Lee, who was castled while attempting a whip on the leg-side from a quicker delivery.

She returned to bowl in the 15th over and added the wicket of Nadine de Klerk (9), bowling her with an arm ball as South Africa slipped to 63 for 5.

Luus tried her best to resurrect the South Africa innings before falling to Deepti Sharma (1/22). She struck three powerful boundaries but her attempted pull off a  delivery that kept low proved her undoing.