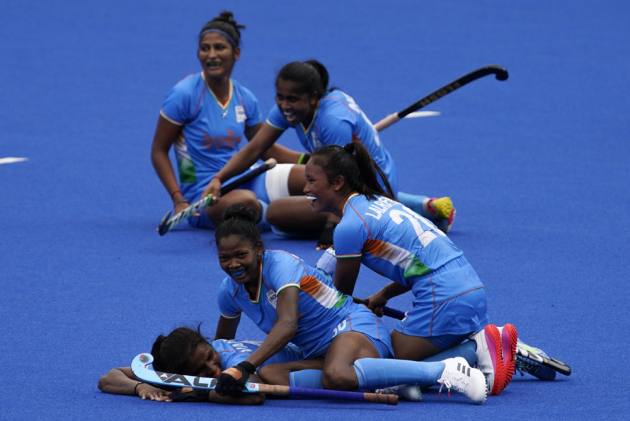 "A dream moment", said the country's sports fraternity in unison as it celebrated the resurgence of Indian hockey at the Olympics after the women's team advanced to its first ever semifinal at the Games in Tokyo on Monday.

A day after the Indian men's team entered the Olympic semifinals following a 49-year gap, the world no. 9 women's side also produced a phenomenally gritty performance against the world no 2 Australia in an intense quarterfinals here.

It triggered an outpouring of emotions as people from all walks of life, including former and current sportspersons and politicians, congratulated the team.

READ: To The Point - Patnaik’s Trust In Hockey Is Paying Off

Describing it as "a dream moment", former India hockey captain Viren Rasquinha said: "Impressed with the way the Indians defended post the goal. They didn't just defend the lead, they almost attacked the lead. They were not afraid to go up and press the Australians.

"The men's game made us much more uncomfortable yesterday than the Australian women. Credit to the Indian women's team.

"One biggest improvement in the team is the sheer physical presence, the fitness, endurance levels. In today's modern format unless the fitness level isn't at the highest level it is hard to survive."

Drag-flicker Gurjit Kaur rose to the occasion and converted India's lone penalty corner in the 22nd minute to surprise the Australians.

"To score a goal against one of the best teams in hockey is amazing. She hasn't been in best form, it took a bit of luck, as it took two deflection but who cares, what matters it was a goal for India," Rasquinha said.

India will next take on Argentina in the semifinals on Wednesday.

Congratulating the team, Sports Minister Anurag Thakur wrote on his twitter handle: "Splendid Performance!!! Women's Hockey #TeamIndia is scripting history with every move at #Tokyo2020 ! We’re into the semi-finals of the Olympics for the 1st time beating Australia."

"India's dream is coming to reality! Our Women's Hockey Team has defeated Australia! India's Men's and Women's teams have reached semi-finals at #Tokyo2020 Olympics! I have no words to express my excitement and happiness!," he tweeted.

Odisha chief miniter Naveen Patnaik, who has been at the forefront in supporting the hockey teams through sponsorship as well, said glory awaits.

"Congratulate Indian Women’s #Hockey Team on registering a thumping victory in the quarter-final against Australia at #Tokyo2020. May the team continue its winning streak & bring glory to the country. Wish the team all the best," he said.

India's first ever individual silver at the Olympics, shooter Col Rajyavardhan Rathore, who was also the sports minister in the past, wrote: "Congratulations to the Flag of India Women’s Hockey Team for entering the #Olympic semi-finals. You've made India proud! Best wishes for the next match."

"Incredible Morning. So proud of our women’s hockey team. Nothing unites us the way sport does !!!," he wrote.

Rio bronze medallist wrestler Sakshi Malik tweeted: "THESE GIRLS HAVE DONE IT! THEY HAVE DONE THE UNTHINKABLE! The #IND women's #hockey team are into the SEMI-FINALS after beating #AUS 1-0."

"Chak De India! Indian hockey has been been super impressive at the #OlympicGames Imagine if both men and women came back with Gold medals First place medalFirst place medal #Cheer4India,"

India football team skipper Sunil Chhetri wrote: "If you thought Sunday was good then our women have just gone and made Monday exceptional with a performance for the ages! First semifinal appearance in an Olympic Games and that's how you do it - with a big, solid fight. Had us glued throughout. #TeamIndia #Tokyo2020."

"Our girls have created history. Beaten #AUS in the quarter-final match of women’s #hockey by 1-0 to seal their spot in SEMI-FINAL for the first time ever! Best wishes for the semis. #Tokyo2020," he tweeted.

In his tweet, BCCI secretary Jay Shah said: "What a start to the day! It’s a historic moment in Indian Hockey with our women’s team reaching the semis after beating Australia in the quarterfinal 1-0. #GoForGold #Cheer4India #Hockey."