Steve Waugh's Australia were the team to beat at that time and a youthful Indian team could take the fight to the enemy camp. That was the beauty of the series 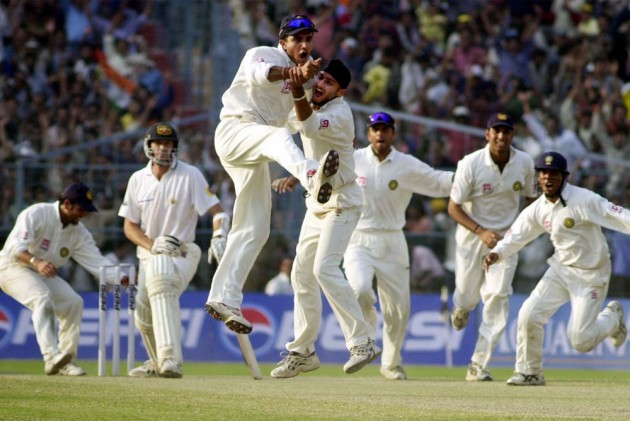 The legendary former Arsenal football manager Arsene Wenger had once famously said, “If you do not believe you can do it then you have no chance at all.” Belief stems from faith in one’s ability and one’s preparation. Preparing yourself for any important event is in your hand and if you know you have prepared well, it will reflect on your self-belief which is important for an individual to succeed.  (More Cricket News)

Australia were set to tour India in 2001 and during a Duleep Trophy pre-match press conference in Pune in February 2001, I was asked if India can beat Steve Waugh’s Australians, who were looking invincible with 15 Test wins on the trot. I was leading West Zone in that match against the East Zone and told the media that I wanted to see how the Australian team performed under pressure. Till then, the Aussies were playing magnificently but it was mostly one-way traffic. Cricket is a funny game and I was sure that if India can apply pressure, we would win. I truly believed in our abilities as a team and was confident of doing well against the Aussies.

The Indian team at that point in time was in a transition phase. Sourav Ganguly had become captain, we had a new coach in John Wright. Javagal Srinath and Anil Kumble were not available, Zaheer Khan was raw and many youngsters were being roped in for the high-profile series at home. It was a challenging time for sure and we had to keep our chin up.

READ: How We Held The ‘Final Frontier’ - Tendulkar Writes

The series started with the Australians being at their dominant best and we lost the first test in Mumbai by 10 wickets before heading to Kolkata. At the Eden Gardens, Australia carried on from where they left at Wankhede Stadium. Steve Waugh promptly opted to bat after winning the toss and Mathew Hayden opened with Michael Slater to give the Aussies a rousing start. In such games, where the opposition is relentless, the only way to keep fighting is by converting half chances -- which our substitute fielder Hemang Badani did when he took a crucial catch to dismiss Hayden on 97. We ticked all those boxes on day 1 as Harbhajan Singh mesmerized the Aussies with some brilliant off-spin bowling. Hayden’s wicket for 97 and then Bhajji’s hattrick (Ponting, Gilchrist and Warne) put the match in balance for us.

A young Harbhajan was like a man possessed. I have never seen him bowling like this in his entire career. That he wanted to fire in this series was evident from the first Test itself where he got four wickets. The release, the loop and the bite he was getting from the Eden wicket made him a difficult customer and I got a taste of this while batting in the nets. Harbhajan was one constant in this entire series. He kept pegging away from one end while we rotated the newcomers like Rahul Sanghvi, Venkatapathy Raju, Nilesh Kulkarni and Sairaj Bahatule from the other end. The fact that Harbhajan ended up as the highest wicket-taker of the series with 32 wickets only highlights the impact he had made.

ALSO READ: My Cricket Career Was At Stake

We were obviously disappointed with our first innings batting. On Day 3, we were in a difficult position as Australia asked us to follow on but as a team, we believed that it was not over till it was over. We shuffled the batting order and VVS Laxman came out at Number 3. It was the need of the hour because he was in rhythm and was the last man out in the first innings, scoring a defiant 59.

In my book, Rahul Dravid was best at No. 3. In fact, he started batting at No.3 for the first time under my captaincy in South Africa when I promoted him to No. 3 from No. 6. But at Eden Gardens, we needed Laxman to counterattack. He loves scoring in boundaries while Dravid was the quintessential ‘wall’. This decision to promote Laxman to no.3 worked brilliantly for our team and the 376-run partnership between Laxman (281) and Rahul (180) brought us back in the game and we were thinking differently on Day 4 evening.

As Laxman and Rahul kept chugging along, we were quite tense in the dressing room. I did not move an inch from my seat and everyone in the team was ready to do everything for those two warriors out there on a sultry Kolkata day. Cold towels, dry gloves and the hydrating drinks, we made sure that everything was ready. It amplified our camaraderie and showed how adversity brings the best out of a young team. It brought memories of my media conference at Pune and Australia were indeed now feeling the heat and with every run scored on day 4, we thought the door was opening for us.

Given Australia’s aggression, we were sure they would go for the 384-run target in 75 overs. Hayden and Slater gave Australia a good start. It was Bhajji who exploited the Day 5 wicket brilliantly again and saw the back of Slater. Mark Waugh’s failure and Langer’s exit gave us a glimmer of hope. Badani took a sensational reflex catch at short leg to see Steve Waugh off after tea and with the Eden crowd cheering us, we had an extra spring in our feet. The script was going our way, after all. I came in at a period when something needed to happen. Hayden had scored runs in the first innings and was batting well in the 2nd innings too and we all know how dangerous Gilchrist is. It was great fun to get Shane Warne out off a googly and more importantly, I was happy to be able to contribute to the team’s cause by taking those 3 crucial wickets. We ended up winning the match by 171 runs. This, after we scored only 171 runs in our first innings as a response to their 445. No wonder this victory is right up there for all of us.

In sport, it is all about timing. Results cannot be controlled. There are times when things just happen. In the last Test in Chennai, Steve Waugh was out handling the ball. Can you really plan a dismissal like that? It was just destined to happen.

When you put everything together, there were many noteworthy contributions from different individuals through the series, but for me at the end of the day, it is the team that matters. Team India won that series against Team Australia and the ‘Final Frontier’, as Steve had reportedly called it, was not breached. That series was one of the most fascinating test series of my career.

The recent win in Gabba is also so special because of what our players achieved as a team. Good individuals make a great team but individuals come and go, the team is a constant. We all players have been fortunate to have got the opportunity to represent Team India at various stages and it is our responsibility to carry the team’s legacy forward.

Going back to that series against Australia, in our era, Steve Waugh’s Australia was the team to beat. Thus, the Eden win is right up there in my list of memorable matches but there are few others as well. I reckon Srinath’s six for 21 that won us a thrilling Test match against South Africa in Motera in 1996-97, Kumble’s 10 wickets against Pakistan in February 1999 at Kotla and India’s sensational six-wicket victory chasing 387 in the fourth innings against England in Chennai in December 2008 were great advertisement for Test cricket.

The game is forever changing and will continue to do so. Another 20 years down the line, who knows how cricket will be played. We never spoke about strike rates in Test cricket during our days. It was not even discussed in ODIs! The impact of the shorter formats has made batsmen take more risks and strike rates are an important column in a cricket statistic. I hope Test cricket retains its long-format grandeur.

(As told to Soumitra Bose)