Bhavani, the first Indian fencer to qualify for Olympics, began her campaign with a big win against Tunisia's Nadia Ben Azizi but bumped into world number three and Rio Olympic semifinalist Manon Brunet at Tokyo 2020 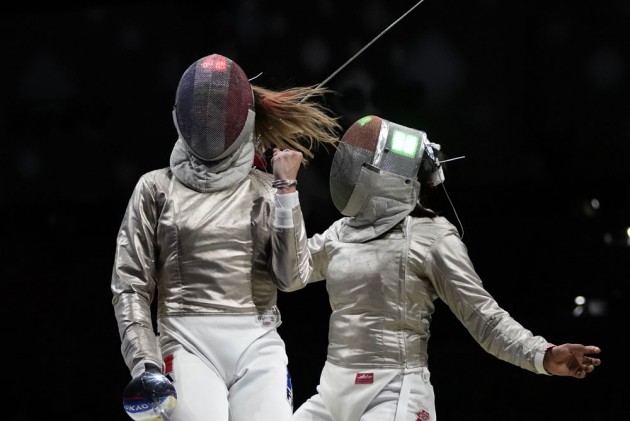 Bhavani Devi's Olympic debut ended with a second round defeat in the women's individual sabre event but the Indian trailblazing fencer bowed out of the Tokyo Games with much promise on Monday.

The 27-year-old Bhavani, the first fencer from the country to qualify for Olympics, began her campaign with a confident 15-3 win against Tunisia's Nadia Ben Azizi but bumped into world number three and Rio Olympic semifinalist Manon Brunet in the next round, which she lost 7-15.

Bhavani's aggression yielded points against Azizi but French Brunet used all her experience to negate the tactics of the Indian, who lost two points for going out of the arena.

The Indian could score only one point each in the first two periods but came back well in the third.

Brunet was sharp and had better technique as she scored points from distance.

After trailing 2-8 going into the third and final round, Bhavani needed nothing short of a spectacular show in the final one but Brunet largely remained untroubled in the nine minute and 48 second match.

In the opening round though, Chennai's Bhavani was a better player, taking advantage of Azizi's open stance that allowed her score points quickly.

Bhavani did not concede a single point in the first three-minute period and raced to a commanding 8-0 lead against the Tunisian.

Nadia managed some touches in the second period but the Indian kept building her lead to win the contest in six minutes and 14 seconds.

The fencer who touches the 15 point-mark first, is declared winner.