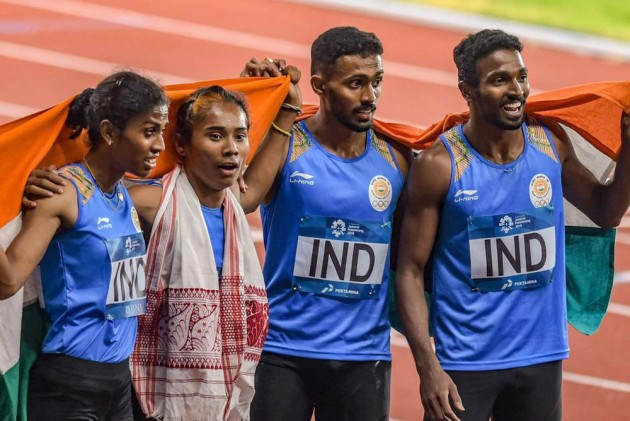 The Indian 4x400m mixed relay team's silver medal in the 2018 Asian Games has been upgraded to gold following the disqualification of original winners Bahrain on account of a doping ban handed to one of its runners. (More Sports News)

Bahrain, which had topped the 4x400 mixed relay final, was disqualified after Kemi Adekoya was handed a four-year ban by the Athletics Integrity Unit (AIU) for failing a dope test.

Besides this, Anu Raghavan's fourth-place finish in the women's 400m hurdles event has been upgraded to bronze medal after the AIU annulled the results of Adekoya, who originally won the race.

The Indian quartet of Mohammed Anas, MR Poovamma, Hima Das and Arokia Rajiv had clocked 3:15:71 behind Bahrain (3:11:89). Raghavan had clocked 56.92 to finish fourth in the final race in Jakarta.

"It feels great to hear that we have a gold now but had we won the race in Jakarta, it would have given us a completely different feeling. But yes, a gold is a gold," Poovamma said. "The problem with doping is that the results come late and this gold is something we were expecting. I mean when the national anthem plays and you stand on the podium, you feel on top of the world."

Athletics Federation of India President Adille Sumariwalla said the AFI is delighted to see the World Athletics website ranking India's 4x400m mixed relay team as the winner of the Asian Games and Anu Raghavan as the bronze winner in 400m hurdles.

"The additional medal takes our tally to 20, including eight gold and nine silver," he said.

"The news comes as a fillip to us as we are aiming to build on the Asian Games showing and make a mark at the global level in the Olympic Games in Tokyo next year," he added.

He said the 4x400m relay squad will be particularly pleased that it now has two gold and a silver from Jakarta.