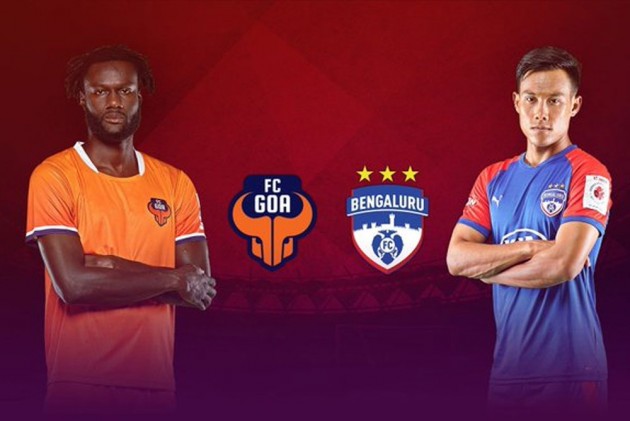 In a replay of the last season's finale, FC Goa managed to salvage a draw against defending champions Bengaluru FC despite deservingly made shadow chasers by a superiors side. But it all changed after the introduction of Jackichand Telem, who took the game to the visitors at Fatorda. Another Manipuri, Udanta Kumam gave Bengaluru the lead in the 62nd minute with cool, left-footed finish. But the league's all-time leading scorer, Ferran Corominas toyed with an out of position Ashique Kuruniyan to draw a foul and earn the subsequent penalty. Tomorrow, we have Jasmshedpur vs Hyderabad [READ Preview HERE] . Don't forget to tune in.

90+5' - And after some confusion about the final whistle, which was not, Jackichand Telem delivers another brilliant corner and Goa almost stole a win. But that's not to be tonight. It's 1-1.

89' - Second after winning a free-kick, Raphael Augusto gets himself booked for a foul.

85' - Jackichand Telem again makes a stunning run from a Seriton Fernandes release. Jackichand once again sends in a cross but Gurpreet Singh Sandhu collects it from the foot of another Goa player.

83' - Goa in desperation. Jackichand Telem breaches two-man defence and squares it for his onrushing partner, but the ball wins the race against Manvir Singh.

81' - Udanta Kumam gets a booking for his stretches arms on just arrived Saviour Gama, who replaced captain Mandar Rao Desai.

79' - Some drama. Ahmed Jahouh almost pushes the referee. He's leaving dangerously. It all started with a big tussle for the ball inside the Goa half, featuring Seiminlen Doungel and Dimas Delgado. Free-kick to Bengaluru.

76' - Goa captain Mandar Rao Desai gets a yellow for his foul on Dimas Delgado near Bengaluru box.

75' - Seriton Fernandes is covering lots of ground tonight. He plays to Jackichand Telem, then the Manipur winger releases a cross, but finds a rival Manipuri, Udanta. Bengaluru make another move.

73' - Second change for Bengaluru. Manuel Onwu out, Eugeneson Lyngdoh in.

71' - Yellow card for Ahmed Jahouh for a late lunge on Dimas Delgado. Goa bring in Jackichand Telem, for Lenny Rodrigues.

69' - What a run and release from Udanta Kumam. But Seriton Fernandes makes a crucial interception to beat Sunil Chhetri.

66' - FC Goa change the gears. A couple of close chances, the latest one being a header from Mourtada Fall, from a teaching lob inside the box.

62' - GOAL! Udanta Kumam produces a brilliant finish from a long a ball. Cool finish. Waiting for Mohammad Nawaz to attack the ball and slotting home. Manuel Onwu does well to head the ball in the path of Udanta.

61' - Now Goa FC are doing the shadow chasing. What a pass from Goa left-wing, but the linesman makes the whole play joke by raising the flag when the running Goa player's not even near the half-line.

58' - A direct free-kick. But not hitting the target. Poor attempt from Brandon Fernandes.

57' - Goa FC are getting involved in the match. After a spell on possession, Ferran Corominas wins a free-kick just outside the box, courtesy a push from Dimas Delgado. Moments ago, Raphael Augusto gets penalised for a foul on  Seriton Fernandes.

54' - First sub. Bizarre. Only ten minutes into the second half. They could have done it at the break. Anyway, Albert Serra in on for Rahul Bheke.

51' - Good looking corner from Dimas Delgado, reaches Sunil Chhetri. But the skipper's attempt to convert it to a volley with his left foot fails. Ball sailing high over the bar.

49' - Brilliant run from Ashique Kuruniyan. But his final delivery, an intended cross from the left flank gets blocked by  Mourtada Fall. And a corner.

47' - With no room to move forward. A Goa player tries a long ranger, without a clue.

46' - Udanta Kumam, again, starting with a blistering run. Almost beats Goa goalie with a cross from the far side.

8:27 PM IST: Obvious difference in class. Bengaluru came prepared and have had better moves and more possession. Goa were more cagey, keeping it to themselves. There were a couple of good runs, with Seriton Fernandes laying the initial foundations to those moves. But for star players, Sunil Chhetri for Bengaluru and Ferran Corominas for Goa were off colour. Only one attempt each in the first half, but Bengaluru had seven crosses and five corners as against Goa's none.

45+1' - Raphael Augusto commits a foul, brings down a rival in front of the referee. A free-kick. And that's all from the first half.

44' - Bengaluru win a contentious through in inside the Goa half. Hosts players not happy. Bengaluru keep the possession after winning the ball back. Sunil Chhetri relays it to Harmanjot Khabra, but bad following up. Goa can't either keep possession as Udanta wins the ball back and also a free-kick, just outside the box.

37' - Nishu Kumar brings down Brandon Fernandes. No card, but a free-kick for FC Goa. Not good enough. Wastage.

36' - After a brief stoppage, thanks to a foul, Seriton Fernandes gets going with a brilliant run. He then releases a teasing cross, but just misses the intended target.

34' - Nishu Kumar to Raphael Augusto, then Udanta Kumam. Very good play from Bengaluru, and the final ball to Sunil Chhetri. That's little high for the dimunitive Indian magician. Jumps high, still not enough. Applause from the skipper though.

32' - FG Goa are slowly growing in confidence. But so far, no shots on target from either side. That's unexpected from a match featuring the two top contenders.

31' - Seriton Fernandes instrumental in winning the ball, then captain Mandarer Rao Desai launches an incisive run. But he fails to keep the ball in play. Goal kick to Bengaluru.

29' - Dimas Delgado wins the ball back inside the Goa half as Bengaluru continue to win second balls with ease.

28' - Yet another corner for Bengaluru, fourth so far. Dimas Delgado's out-swinging delivery takes some chasing from a team-mate to keep relevant. Nothing comes off it.

24' - An opening for Goa, against the run of play. But the ball was travelling. No one's chasing that though Bengaluru defensive line is high.

23' - From the following play, Manvir Singh gets an early release but fails to beat Nishu Kumar near the centre. And a loose defensive ball puts Goa goalie in a spot. Not trouble though.

20' - Mourtada Fall commits a foul to Manuel Onwu. And rightly penalised.  Bengaluru win a free-kick just inside the Goa half. Dimas Delgado's delivery, however, fails to impress despite Sunil Chhetri's best effort near the far corner.

19' - Ferran Corominas wins a free-kick in a dangerous spot for Goa. A very good delivery, to find a teammate near the far corner. But goal-kick to Bengaluru.

17' - Away fans are making their noise heard. No empty space of Goa players now. Brilliant man-marking from Bengaluru.

14' - Nishu Kumar and Udanta Kumam are having a good game together for the champions. They have so far produced some good interplays and runs.

13' - Throw inside the Bengaluru half for Goa. But Bengaluru well equipped to clear the threat. And another foray inside the Goa half.

12' - Some frenetic defending from Goa defenders to block a couple of Udanta attempts.

3' - Bengaluru dominate the early proceedings. Bheke produces a long throw into the Goa box, but Jahouh clears it away.

1' - Very good start from the visiting side. Udanta Kumam wins an early corner. Nishu Kumar fails to properly connect his attempt from the ensuing play.

6:32 PM IST: Highlights Over The Years

Bengaluru FC failed to impress in their first match against visiting NorthEast United and settled for a goalless draw. It was supposed to be a cracker of a game, but ended up being a poor advertisement of Indian Super League. Early season rustiness can be blamed for the lacklustre display, and also the pouring rain which slowed down the pace of the game.

But, FC Goa got off to a confident start with new signing Seiminlen Doungel scoring on his debut to break the deadlock in the 30th minute. Then all-time ISL top-scorer Ferran Corominas struck in the 62nd minute and substitute Carlos Pena added a third in the 81st minute as they thrashed an unimpressive Chennaiyin FC.

FC Goa should welcome Ahmed Jahouh back to the starting XI. Edu Bedia and Hugo Boumous are also likely to return for the Gaurs after missing out on the opener due to fitness problems. Visitors will be without Albert Serran and Erik Paartalu.

During the pre-match press conference, Lobera revealed that Bengaluru FC pose a serious threat to Goa.

"I need to do more training. I am very optimistic, so it is possible to use the whole squad. We are looking forward to a very difficult match. In the last season, BFC were at a very good level and I think Goa increased the level," he had said.

But Cuadrat opted to praise Goa.

"Goa is always a very demanding visit. They have a wonderful team and have managed to retain the squad just like Bengaluru FC. The matches against FC Goa have always been interesting and a treat to watch for the fans. I expect it to be the same and hope we put on a show," said the Spaniard.