Amine Chermiti scored for Mumbai City, as they edged past Kerala Blasters in the Indian Super League. Here are the highlights from the match 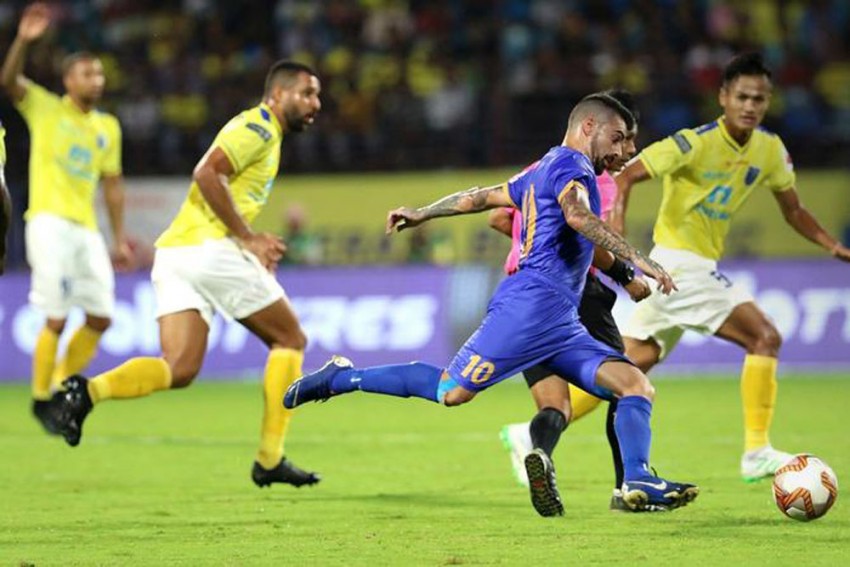 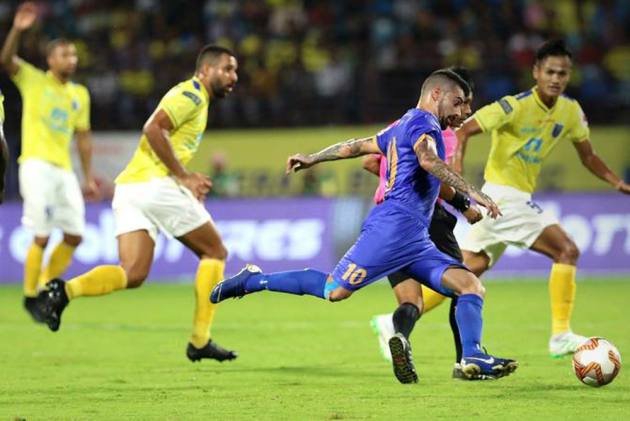 Mumbai City edged past Kerala Blasters at Kochi's Jawaharlal Nehru Stadium in their first Indian Super League fixture of the season. Amine Chermiti scored the only goal of the match, with the fixture ending as 1-0. Kerala captain Bartholomew Ogbeche came the closest for his side in injury time, but was denied by an instinctive Amrinder Singh. Here are the highlights of the Indian Super League 2019-20 fixture between Kerala Blasters Vs Mumbai City

21:28 hrs IST: FT' And the referee blows his whistle for full time. Mumbai City walk away with three points, and Kerala Blasters are left in a sorry state at the Jawaharlal Nehru Stadium. Amine Chermiti scored the winner for Mumbai, and notched them a win in their first fixture of the ISL season.

Sahal does everything right in a crowded Mumbai box and passes the ball to Ogbeche. Ogbeche fires a shot from point blank range, but Amrinder saves it! Captain to captain, what an amazing save!

21:26 hrs IST: 94:12' An absolute horrible pass by Sahal. With the clock ticking, the midfielder dribbles with the ball near the half-line and releases a long pass but it goes nowhere and for a goal-kick.

21:21 hrs IST: 90:18' Five minutes of injury time added. There is still a chance for Kerala to find the equaliser.

21:17 hrs IST: 85:50' Poor set-piece by Sahal. Kerala get a freekick near the half-line. The India international takes it and sends a poor low shot towards a crowded Mumbai box. It gets cleared away from the first line of defence itself!

The man from Tunisia has given Mumbai a crucial lead in Kochi. A cross comes in from the right flank, and Chermiti finishes it from the penalty spot and sends it going in past Bilal.

The Manjappada are roaring as Sahal trots into the field. Can he change the game for Kerala and maybe get a winner?

21:05 hrs IST: 74:09' Jessel tries to run inside the Mumbai box, but Chakrabarti blocks him in an excellent manner and lets the ball go out for a goal kick. Elsewhere, Sahal is currently warming up!

Cido's corner gets cleared out of the Mumbai box. New acquisition Jessel rushes in and unleashes a piledriver from his left foot. Amrinder puts in a fingertip save.

20:46 hrs IST: 55:30' Second corner of the game for Kerala and Cidoncha takes it. He puts in a curling ball, but Mumbai clear it away with considerable ease from the near post.

That was a wild miss! A lovely ball from Carlos from the left flank for Sougou, who taps it in, but it goes wide just slightly. CLOSE!!

20:43 hrs IST: 51:11' Fourth corner for Mumbai. Machado drifts it straight towards Bilal. He punches it away for another corner.

The resulting set-piece goes out for a goal kick.

20:41 hrs IST: 50:00' Sougou's arrival in the dying stages of the first half, as added an extra spark into Mumbai's attacks. Highest goalscorer for his team last season, Sougou will need to use his pace and strength for his side.

20:40 hrs IST: 49:02' Bose needs to click in this match. The left-back arrived in Mumbai last season and hasn't really been able to show his mettle yet. Considered to be India's best wing back currently, he has cut a sorry figure in this match until now.

20:36 hrs IST: The referee blows his whistle for the second half! Who do you think will be the victor tonight? Kerala Blasters? Or Mumbai City?

20:20 hrs IST: HT' And the referee blows the whistle for half time. Both sides haven't scored a goal yet, but have come close. It has been a highly tactical first half, with the decisive winner yet to be decided.

Cido puts in another looping cross via a freekick. It lands for Jairo in a crowded Mumbai box. Jairo heads it low and uses power. Amrinder puts in a reflex save and clears it away. Excellent save by the India international!

20:08 hrs IST: 34:00' A tactical tweak by Schattorie. Narzary and Prasanth change flanks, with Kerala looking for spaces in Mumbai's backline.

Kerala defender Jairo gives the ball away, and Mumbai unleash a counter. But it is Jairo who comes and intercepts Chermiti and sorts the mess out

Cido took a free kick from outside the box. A looping ball into a crowded Mumbai box, with Ogbeche attempting a header which went wide.

19:54 hrs IST: 21:54' Both sides are battling it out in the middle of the park, and none have been able to cement any kind of supremacy yet. But Mumbai City do look like the better team right now, with Kerala Blasters sitting back and absorbing pressure.

A good save by Bilal Khan. Mumbai's Carlos saw the goalkeeper out of his line and unleashed a deliberate shot from the right side in Kerala's box, but Bilal sent it for a corner.

The Mumbai player received a cross inside a crowded Kerala box, but his header was way too high, as it went above the crossbar.

19:41 hrs IST: 08:40' Good defending by Borges. Ogbeche was looking lethal with the ball on his feet. The striker began to approach the Mumbai box, but Borges made a crucial interception on his former teammate.

19:39 hrs IST: 06:00' Another run by Chermiti, but Bilal punches it away. Mumbai's new arrival has created some testing moments for Kerala already.

19:38 hrs IST: 05:23' Borges has been slotted in as the anchor in Mumbai's midfield line. His movement on and off the ball will be crucial to Mumbai's tactics. Currently, we can see him moving around the half-line and spraying sideward passes.

Zuiverloon was caught dreaming, with Chermiti set up with a lob pass. The forward runs forward but falls in the Kerala box. It looks like a foul, but the referee doesn't think so.

19:34 hrs IST: 01:49' Kerala are keeping the ball, but Mumbai are putting pressure right from the start. Blasters are spraying the ball around, looking for spaces. But they need to be cautious as the Islanders are very lethal during counter-attacks.

19:32 hrs IST: And we kick-off at the Jawaharlal Nehru Stadium, between Kerala Blasters Vs Mumbai City. The visitors play their first match of the season, meanwhile, Kerala will aim to notch a second consecutive win.

19:24 hrs IST: Both teams walk into the field for the formalities before kick-off. Bartholomew Ogbeche leads Kerala, Amrinder Singh leads Mumbai. Fasten your seatbelts and get ready for this intense affair!

19:22 hrs IST: Bilal Khan will need to put in a top-drawer display after disappointing in the win against ATK. The former Real Kashmir goalkeeper is one of the best custodians in the country, and will need to show his worth tonight.

19:20 hrs IST: Manjappada fan favourite, Sahal Abdul Samad once again is on the bench for Kerala Blasters. Schattorie feels that the midfielder is not yet ready due to missing huge chunks of pre-season. The youngster was with the national team for its World Cup qualifiers.

19:17 hrs IST: It has started raining in Kochi now. Just like the previous ISL fixture at the Jawaharlal Nehru Stadium, we can expect another drenched football match!

19:15 hrs IST: Rowllin Borges will also have a huge task ahead, after joining Mumbai City from NorthEast United. He will against former head coach Eelco Schattorie, under whom the midfielder developed into one of the league's best!

19:09 hrs IST: Machado will once again be an important player for Mumbai. Last campaign, he played in 20 matches, scored two goals and notched four assists. He also created 39 chances.

19:02 hrs IST: Jorge Costa will be leading Mumbai in their first fixture of the 2019-20 Indian Super League season. Modou Sougou misses out on the starting XI, and is on the bench. He was their top scorer last season.

18:58 hrs IST: Schattorie has named an unchanged starting XI, a copy-paste roster from the ATK victory. Once again Ogbeche will have the main responsibility of scoring the goals, meanwhile Bilal will have a big job between the sticks.

18:30 hrs IST: In their previous match (also the season opener), Kerala Blasters defeated ATK, 2-1 at home. Blasters found their hero in the recruit and new captain Bartholomew Ogbeche. The Nigerian scored twice, from the spot and a beauty of a curler. Here are the HIGHLIGHTS.

18:10 hrs IST: Mumbai City's Costa stated, "We studied the team (Kerala Blasters) but it was the first game of the season. It was not a wonderful game, but it was very good. I watched KBFC for the first time but it was not a surprise. I knew the players, I know the coach."

18:04 hrs IST: Former NorthEast United head coach Eelco Schattorie knows about the threat Mumbai can cause to Kerala but also feels that home support will be a key factor. During the pre-match press conference, the Dutchman said, "If you play at home, you have a little bit of advantage."

"The playing style of Mumbai (City) is clear for me. How the positions are filled and which players is always a question mark when you don't see their games. If you already saw your opponent play one time, it makes a difference. (But) it is another challenge that we have to face," he further added.

17:55 hrs IST: The home side will be depending on the attacking skills of star forward Bartholomew Ogbeche, who scored a brace against ATK.

Gianni Zuiverloon will need to show his defensive presence once again against Mumbai, who have key attackers in the guise of Paulo Machado and Modou Sougou. Influential national team midfielder Rowllin Borges will be the man to watch, as he gears up for his first Mumbai City appearance.

17:50 hrs IST: Kerala have a fitness issue after midfielder Mario Arques got injured in the last match. He is set to miss the clash against Mumbai. Meanwhile, Costa's has a fully fit squad for the fixture.