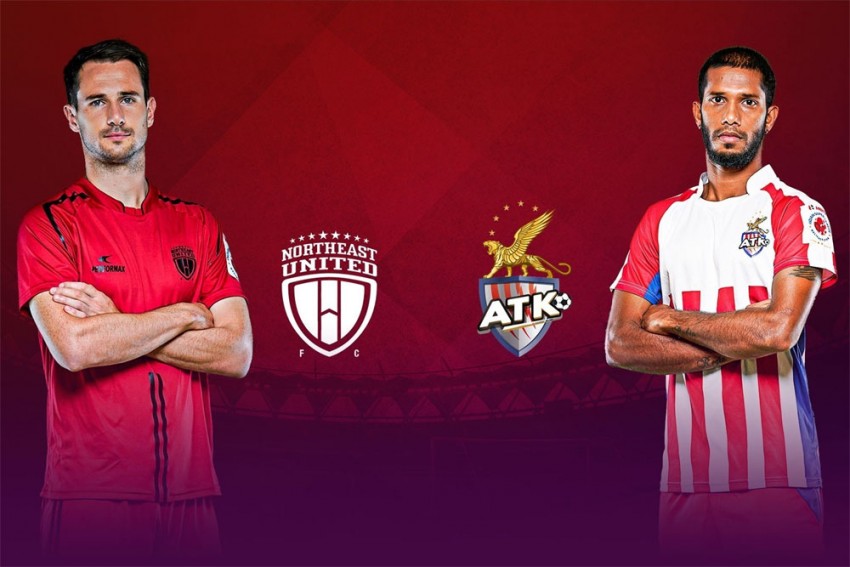 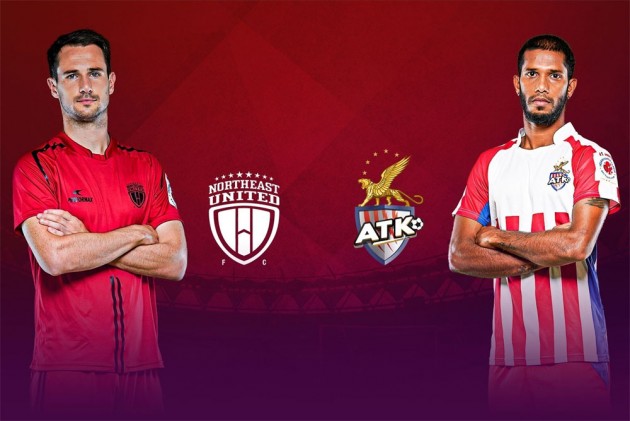 A performance to be remembered from the two-time Indian Super League (ISL) champions ATK at Guwahati. A 3-0 win for the visitors with ever-brilliant Roy Krishna scoring a couple of goals after David Williams's opener. NorthEast United, until unbeaten, failed to cope with ATK's counter-attacking games. ATK take displace defending champions Bengaluru FC at the top of the table. NorthEast remain at fourth.

90-4' One final move from the NorthEast, but again, directionless as witnessed the entire night. Then, Roy Krishna gets his second with a little dink from a brilliant counter-attack started by Jobby Justin. And that's should be the last kick of the match. Not yet, but the last meaningful one.

90+1' - NorthEast keep attacking. Then on the counter, David Williams, Roy Krishna and Javier Hernandez get on a good move against a thinly spread NorthEast defence. But Hernandez shoots the ball wide. And sub for ATK. Jobby Justin on for David Williams. Four minutes added on.

86' - Another long ranger for NorthEast. This time Maximiliano Barreiro doing the awful. Goal kick and ATK goalie Arindam Bhattacharja is booked for time-wasting.

83' - Poor defending from Pritam Kotal, allowing NorthEast's interest inside the box. Nikhil Kadam sends one in for Panagiotis Triadis, and Kotal needs more than a couple of chances to clear the danger away. On the counter, Roy Krishna is brought down by Lalthathanga Khawlhring. And the NorthEast player is booked. Taking one for the team.

81' - Javier Hernandez finally gets into the thick of the action. The ATK midfielder on a one-on-one with a defender, but loses his run.

79' - Now, Martin Chaves is making it personal. A solo run from his own half and instead of linking up, goes for the glory and misses the target. Three shots on the target for the hosts in the match, so far. That tells the story.

78' - Against the run of play, David Williams forces a brilliant save from Subhasish Roy.

77' - Sehnaj Singh goes into for bringing Panagiotis Triadis down just outside the box. The Greek takes the free-kick and an offside the cut short the move.

75' - Then, a couple of chances for the NorthEast. A long ranger from Martin Chaves, then minutes later, Nikhil Kadam wastes a golden chance by playing a jumping game on a brilliant long ball from Puitea. All he needed was a tap in.

73' - Pretty lame effort from NorthEast. Nikhil Kadam gets himself surrounded by ATK players and all he can do is a gentle lob, for an easy take for goalie Arindam Bhattacharja. That's not even a chance.

71' - And another yellow card for Prabir Das for a late lunge on Edu Garcia.

70' - Booking for NorthEast captain Jose Leudo for his shoulder block. And free-kick to ATK. Sub for NorthEast. Redeem Tlang out, Nikhil Kadam in.

68' - Lalthathanga Khawlhring gets a rare attempt, from a distance. Way off the target. Meanwhile, physios have a look at Agustin Iniguez's cut.

66' - Free-kick for NorthEast thanks to a Sehnaj Singh foul. But the hosts manage to just breach the first line of defence. From the following move, Salam Ranjan lets the ball out of play and goal kick for ATK.

64' - What a pass from David Williams for Roy Krishna and the latter goes for the goal at the near post. Corner. Tonight, the officials are spot on. Poor effort from the set-piece for ATK.

63' - At the hour mark, it's still ATK with a two-goal lead. Maximiliano Barreiro wins a free-kick courtesy a push from behind, just outside the ATK box. Panagiotis Triadis delivers, targeting the far post. Then a goal-moth melee. Martin Chaves goes for an aerial kick and in the process injures himself. In the follow-up Reagen Keisam losses possession.

59' - NorthEast, looking for an opening, commit lots of men and as expected, overrun by an ATK counter-attack. Prabir Das, on the runs, sends in a cross for David Williams. The Aussie brings down the ball with good control, but NorthEast regrouped to defend.

56' - And Roy Krishna knows play-acting too. Gently takes a tumble while trying to cut inside from left and the referee is not impressed. Play continues. Then, Roy wins a foul against Jose Leudo.

54' - Contentious throw-in call in favour of ATK near the centre line.  But Heerings Kai wins the ball back and launches a solo run with Redeem Tlang getting the last kick. On the counter, David Williams and Roy Krishna get on a brilliant run, with the latter getting the miss of the season. Up against a moving Subhasish Roy, he sends the ball wide off the left upright.

50' - Yellow card for the Greek. No malice though. He's having a friendly talk with ATK players.

46' - As it stands, ATK are the ISL leaders. And they look determined to keep it that way. A good start in the second half.

8:33 PM IST: Welcome back. Players are back for the second half.

8:25 PM IST: Goals from David Williams and Roy Krishna put ATK in complete control at Guwahati. NorthEast United started very well themselves with Asamoah Gyan going head to head against Arindam Bhattacharja, but the Ghanian failed and minutes later, he was off. And within minutes Williams gave the lead. Then came Roy's brilliant finish.

45-2' - Saudi Arabian referee needs a close look and some talking too after Martin Chaves brings down an ATK player. Slightest of touches. That's the last notable action from the first half.

45' - Reagan Keisam sends in a long ball inside the ATK ball, giving Maximiliano Barreiro the chance to test ATK defenders. But the ball goes out play, over the byline. Tight call. Goal kick for ATK. Two minutes added on.

42' - Redeem Tlang sends him a teasing cross inside the ATK box but Sehnaj Singh blocks with a good header.

40' - A good chance for NorthEast with Panagiotis Triadis launching a curler but a brilliant diving save from Arindam Bhattacharja. Moments ago, Javier Hernandez missed the target at the opposite end.

38' - At the moment, it's only going one way in Guwahati -- the Kolkata way. NorthEast need a quick response.

35' - GOAL! Free-kick for ATK in a promising spot in the attacking third. But the delivery from the set-piece fails to find Panagiotis Triadis. Great timing and jump from ATK captain Agustin Iniguez. Then, from the following play, a cool and calm Roy Krishna slots home ATK's second. Horror defending from Wayne Vaz. Credit to David Williams for a brilliant through ball. For Roy's part, he drops the shoulder and cuts inside than waits for the goalie to make a move and gently slots home.

32' - David Williams leans on a NorthEast defender and foul. Freekick for NorthEast. In the build-up, Arindam Bhattacharja and Agustin Iniguez involved in a massive mix-up but NorthEast failed to make the visitors pay, instead got a long ball leaving a defender alone against Williams.

29' - A very good move from NorthEast to test the ATK defence, which responded well. Corner though as Sehnaj Singh goes for the safety-first approach by heading away. Not a good a delivery from the near flag by Panagiotis Triadis, and from a headed clearance by Pritam Kotal, Reagan Keisam goes for the goal and it goes well above the bar.

27' - Maximiliano Barreiro concedes a foul on Javier Hernandez, then a loud scream from the ATK player and also taking a giant leap. But no call from the referee.

24' - Roy Krishna gets a brilliant long ball and beats Rakesh Pradhan with pace and goes for the goal at the near post. Corner as Subhasish Roy's outstretched leg does the job. Then a hat-trick of corners for ATK with some poor markings and clearance headers. But NorthEast survived despite Agustin Iniguez getting a free header. He should have made it 2-0 for the visitors.

19' - Good run from Redeem Tlang, then tries to find Maximiliano Barreiro. But Barreiro gets tangled in a shoulder to shoulder tussle with Salam Ranjan inside the attacking box. No whistle, goal kick for ATK.

17' - Corner for ATK, first of the match. But fail to make the most out it as NorthEast start their own move from the clearance.

16' - Martin Chaves releases Redeem Tlang with a good through ball, but the Indian youngster fails to keep the ball in play. Good marking by Salam Ranjan.

14' - Foul given against NorthEast United. Prabir Das on the floor. A tough challenge from Rakesh Pradhan. Wasted chance from the ATK set-piece.

11' - GOAL! Suddenly, NorthEast United switch off and confusion in the backline and David Williams heads across the width to beat Subhasish Roy. Rakesh Pradhan almost clears it from the goal-line, but not to be tonight. Prabir Das the supplier with a very good pass.

9' - And what. Asamoah Gyan is coming off. He picked up a niggle while going for that chance early in the match. Precaution, probably. And his replacement is Maximiliano Barreiro.

7' - David Williams earns a free-kick in the middle of the pitch, courtesy a Martin Chaves tackle. From the set-piece, David Williams sends in a low cross and Roy Krishna almost beats Subhasish Roy. Good chance for ATK.

4' - Sehnaj Singh brings down Lalthathanga Khawlhring near the centre and free-kick to NorthEast, and Asamoah Gyan beats Agustin Iniguez on the ball from the following play and what a chance. Gyan denied near the far post by Arindam Bhattacharja. Body block.

2' - Early free-kick for ATK inside the NorthEast half. Good clearance by Redeem Tlang, and the hosts on a move.

1' - Turki Alkhudhayr blows the whistle. NorthEast United attack from right to left in this half.

7:29 PM IST: A quick look at the changes made by the respective managers.  Robert Jarni made just one change in the NorthEast United XI from their last match. Kai Hearings in for Mislav Komorski. ATK boss Antonio Lopez Habas made a couple of changes. Agustin Iniguez and Salam Ranjan in Carl McHugh and Anas Edathodika respectively.

7:24 PM IST: Players are getting out. Pre-match rituals next.

5:40 PM IST: A win for NorthEast and they displace two-time champions ATK at the second spot. A win with a goal difference of three goals and they displace defending champions Bengaluru FC at the top. A draw and they displace Jamshedpur at third. For the visitors, a simple win is enough to reclaim the top spot while a draw will ensure they remain second. And we are not talking about defeat, for either side.

NorthEast United have been pretty erratic in their run of form this season. Although not having lost yet, Robert Jarni's side have registered three draws from their last four fixtures. The attack consisting of Asamoah Gyan and Martin Chaves has looked lethal, but the backline has been leaky.

The Croatian gaffer will see his team welcome defender Kai Heerings who has finished serving a suspension.

Ahead of the match, Jarni said, "It does not depend upon us when the goals will come. In all games, in the first 15-20 minutes, we observe the opponents. When you play away from home, it is difficult to score as well."

"We have many different players who are scoring the goals and making a difference," he quipped.

Regarding his upcoming opponent, Jarni said, "For me, at this moment, this is the best team in India. ATK is a dangerous team. Because many players are very good with each other. And we want to give everything in the pitch to win the game."

ATK are aiming to cement their dominance in the league after some excellent performances, but have been drawing matches lately. Antonio Habas has a well-balanced unit consisting of Pritam Kotal in defence, Roy Krishna and Michael Soosairaj helping in attack. The team will also see Agus Garcia return.

Ahead of the match, Habas praised Gyan. He said, "He (Gyan) is a very good player. He played three World Cups. Our idea is to defend freely and with determination. He is a very important player for NorthEast. We have to have control on the field."

"We are second in the league table. We are quite good in scoring goals as well. The team is balanced, but we want to be better," he added.

Reforms In Indian Sports Administration Still Some Distance Away