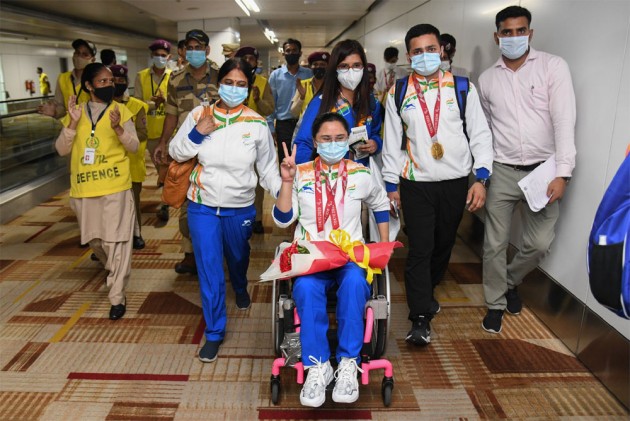 The last batch of India's triumphant Paralympic athletes, including shooting sensation Avani Lekhara and shuttler-cum-bureaucrat Suhas Yathiraj, returned home to a rousing reception on Monday with their supporters and families thronging the airport for a glimpse of the heroes. (More Sports News)

India returned with an unprecedented 19 medals, including five gold, eight silver and six bronze to sign off the country's best-ever Paralympics campaign by finishing 24th in the overall tally on Sunday.

The last batch of Indian para athletes, who returned home this evening were the badminton contingent, shooters and recurve archery team.

Among the medal-winning para athletes who returned to a grand welcome were 19-year-old Lekhara, who won a gold and bronze, gold winning shuttlers Pramod Bhagat, and Krishna Nagar, silver-medallist Yathiraj, bronze-medallist Manoj Sarkar, and triumphant shooters Singhraj Adana and Manish Narwal among others.

The para athletes were received by Haryana Sports Minister and former hockey player Sandeep Singh, officials of the Paralympic Committee of India (PCI), besides a swarm of fans among others.

Earlier, silver medal winning table tennis player Bhavinaben Patel also returned to the country in the morning along with other athletes and officials.

All the athletes were garlanded and escorted out of the terminal by airport's civil defence volunteers amid thunderous applause.