Cheteshwar Pujara, Jasprit Bumrah, Rishabh Pant, Mayank Agarwal were the stars of the series which witnessed a rare failure from skipper Virat Kohli. 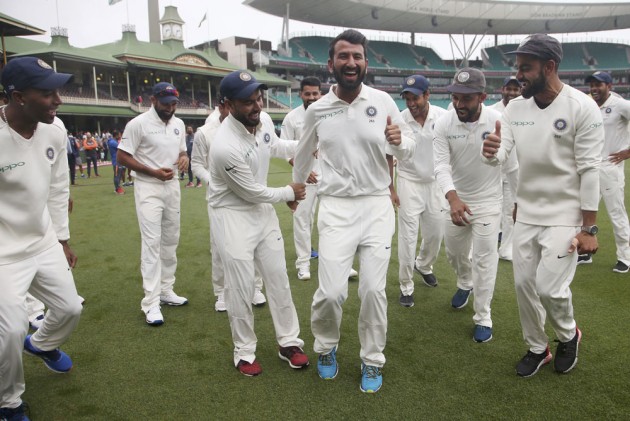 The Virat Kohli-led Indian team registered its name in history books after winning their first-ever Test series in Australia on Monday.

After the visiting team won the Adelaide and Melbourne Test of the series, the fifth and final Test at the Sydney Cricket Ground (SCG) ended in a draw as no play was possible on the last day due to continuous downpour. With that India clinched the series 2-1.

Cheteshwar Pujara, Jasprit Bumrah, Rishabh Pant, Mayank Agarwal were the stars of the series which witnessed a rare failure from skipper Kohli.

Sydney Test Abandoned, India Win First Ever Series Down Under

Australia Follow-On At Home For 1st Time In 31 Years

Lists Of India's Test Series And Wins In Australia

Congratulations. Today, the Indian cricket team wins its first ever Test series in Australia. This is a historic achievement. We are proud of you

Congratulations to India for winning the Test series in Australia for the first time ever ðÂÂÂÂÂÂðÂÂÂÂ¼ @Jaspritbumrah93 I was so impressed with your performance throughout this series! Fast,… https://t.co/7fMSNEeJ1q

Congratulations to @imVkohli and his team for reaching one of Indian cricket’s final frontiers and winning a test series in Australia for the first time. Gritty batting, marvellous fast bowling and a fine team effort has done us proud. Let’s make a habit of it! #PresidentKovind

Congratulations to @imVkohli & his Indian Team on winning their first ever series in Australia. They outplayed @CAComms in all departments. Very well deserved. #AUSvIND #pinktest https://t.co/UkEJcrzJ3I

@cheteshwar1 congratulations on the player of the series brother. You deserve it and so much more for all that you have encountered and overcome in Ur career thus far. You broke the Aussie into the ground and how!! ðÂÂÂÂÂÂðÂÂÂÂ½‍âÂÂÂÂï¸ÂÂðÂÂÂÂªðÂÂÂÂ½Savour this moment!! Lots of love brother! ðÂÂ¤ÂÂ #AUSvIND

When was the last time you did something for the first time? Historic 1st Test Series win for India in Australia! Superb effort by #TeamIndia ! It may have ended in rain but that’s not going to dampen the celebrations! Proud #INDvAUS pic.twitter.com/xVN9OZtye5

Many congratulations #TeamIndia on this historic series win in Australia. It took a complete Team effort from every member of the side and it gives such an immense sense of satisfaction and joy to see what the boys have done on the field. Let’s cherish this special series win pic.twitter.com/QFj7oJg47i

The first ever Asian Team to win a Test Series in Australia. Congratulations #TeamIndia @BCCI . Every Indian is very proud of this historic win pic.twitter.com/0jpb2SugDS

First away Test series win of #TeamIndia that I have witnessed in my life.

Congratulations #TeamIndia for winning first ever Test series in #AustraliaðÂÂÂÂÂÂ. It is a big moment and we are so proud!#INDvsAUS pic.twitter.com/CgCyjrk1wR

Congratulations #TeamIndia for this memorable win. Every cricket lover in India will be very proud of this one and a special effort by every member in the Team to ensure this result. pic.twitter.com/GLUaQgLt4S

Congratulations #TeamIndia on your fantastic win in Australia. Once again you have done your country immensely proud. pic.twitter.com/pFwgrL1HKN