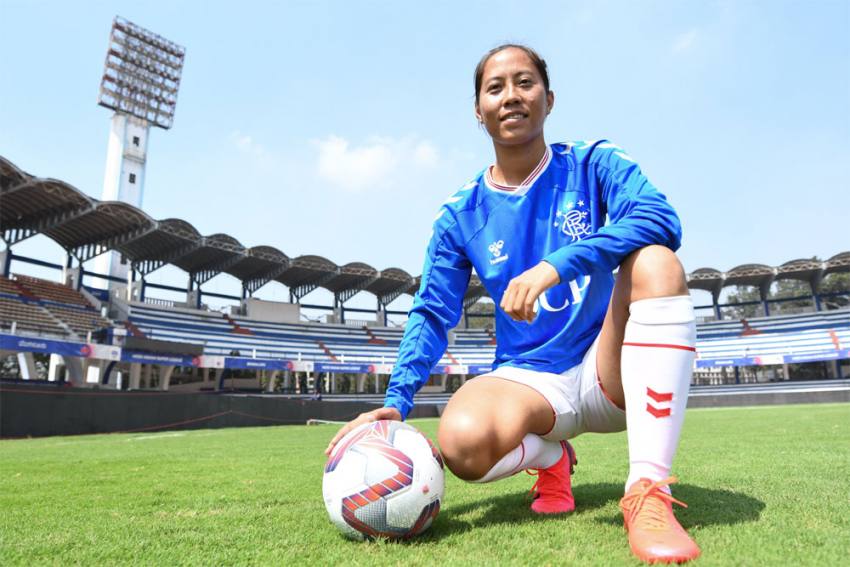 India women's football team's star striker Bala Devi on Friday said she is eyeing an extended stay at the Rangers FC after her 18-month contract with the Scottish women's league side expires on June 6. (More Football News)

The 31-year-old said she hopes she has done enough to impress upon the Rangers coaching set up with her performances in the last one-and-half year.

"As a professional footballer, it really felt good to train and for a big side like Rangers for a full season. I have gained plenty of experience from this stint," the Indian star said in a virtual interaction on Friday.

Bala had scored a scorcher from over 30 yards, her second goal for the Rangers, in a Scottish Women's League match on May 16.

Coming in as a substitute in the 67th minute, Bala scored in the dying moments of the game as Rangers WFC thrashed Spartans FC 5-0. She had scored her first goal during the 9-0 drubbing of Motherwell FC in December last year.

"I have an 18-month contract which is ending on June 6 with the conclusion of the league. So what is stored in future I can't say but I will have discussions with Rangers after June 6," she said.

"I have tried to give my best and I am hopeful but you can't predict anything."

Before Rangers FC, Bala had featured abroad in the Maldivian league for New Radiant Sports Club alongside statemate and idol Bembem Devi.

Bala, who is also first Asian international footballer to represent Rangers FC, had decided to stay back in Glasgow during coronavirus-forced global lockdown last year.

She has been away from her family since last year and the footballer admitted that she is definitely worried about her parents, who lives in her village in Manipur.

"I got emotional last year during the lockdown. With no games around it was tough, I didn't understand what to do. But then I realised why I came here for.

"My father has kidney problems so I am worried about him but my family has been my biggest support during the last one year," Bala said.

By her own admission, Bala is delighted to witness the global growth of women's football, especially India.

"I have been representing India since 2005 and it is very pleasing to see the growth of the game in India since 2017. With the support of the federation (AIFF), we are getting exposure.

"Women's football in India has grown by leaps and bounds. We have also grown in confidence," she said.

Bala said she would be more than happy to share her Rangers experience with her national team colleagues.

"The players who are representing India now have improved a lot. But I will definitely share my experiences with them when I play for India."