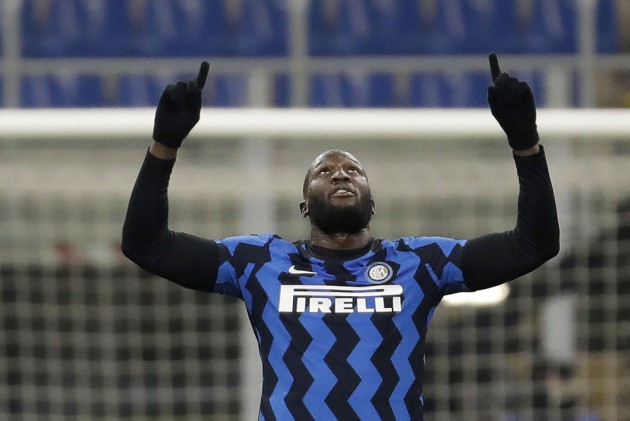 Romelu Lukaku scored twice and assisted another to help Inter to a 3-1 win over Lazio that lifted Antonio Conte's men above bitter rivals Milan to the top of Serie A. (More Football News)

Milan's shock 2-0 loss to Spezia on Saturday opened the door for Inter and they pounced at San Siro on Sunday, taking a one-point lead into next weekend's huge Derby della Madonnina.

Lazio were furious with the awarding of Inter's 22nd-minute penalty as replays appeared to show Wesley Hoedt, drafted in after Stefan Radu was injured in the warm-up, got some of the ball before taking out Lautaro Martinez.

Lukaku converted and added a second ahead of half-time with the assistance of VAR, before teeing up Martinez to seal the points after Gonzalo Escalante had given Lazio some temporary hope.

There had been little between the sides prior to the controversial penalty call, with the VAR standing by referee Michael Fabbri's decision to point to the spot for Hoedt's challenge on Martinez.

Lukaku sent Pepe Reina the wrong way to extend his perfect penalty record in Serie A to 10 from 10, and the Belgium international did not have to wait long for the landmark 300th career goal for club and country.

It had an element of fortune about it as Marcelo Brozovic slid in on Manuel Lazzari and the ball ricocheted into the striker's path, though it took a lengthy VAR check to ascertain that Lukaku was level with the last man when the initial pass was played.

Lazio had found the net in each of their past 17 league outings, however, and they kept that run going when Sergej Milinkovic-Savic's free-kick heavily deflected off substitute Escalante and beat Samir Handanovic on his 500th Serie A appearance.

But just when the visitors had some momentum on their side, Lukaku charged down the right, held off Marco Parolo and unselfishly squared the ball for Martinez to tap into an empty net.

Reina denied Lukaku a hat-trick with a good save down low but Inter, knocked out of the Coppa Italia by Juventus in midweek, retained their two-goal cushion to move to the summit.

What does it mean? Advantage Inter ahead of Milan showdown

This weekend could prove to be huge in terms of the Scudetto race, with Milan and Juventus losing and Inter winning for a third game running to move top.

Lazio were previously unbeaten in seven league games in 2021, triumphing in the last six of those and taking more points since the turn of the year (19) than any other side.

But Conte's men passed the tough test, albeit with some favourable refereeing decisions, and enter next weekend's derby against Milan with their title hopes in their own hands.

Lukaku at the double

Lukaku had scored in only one of his past six league matches prior to Sunday and was without a goal against Lazio in 263 minutes since joining Inter.

He put that right with a couple of first-half goals here and set up Martinez with a sensational assist that combined a mixture of pace, power and composure.

Lazio have a prolific striker of their own in Ciro Immobile, but the Italy international managed just one shot - well kept out by Handanovic in the first half - in his 70 minutes on the field.

However, Immobile did create three big chances for his team-mates - a tally bettered only by Inter winger Ivan Perisic (four), who was filling in at left wing-back again.

- Handanovic became the 15th player to make 500 Serie A appearances and only the second foreign player, after Javier Zanetti.
- Inter have won two consecutive home matches in Serie A against Lazio for the first time since January 2012.
- Lukaku scored his third double in top-flight home games this season – no player in the top five European leagues has more.
- Martinez has scored in each of his past two games against Lazio in Serie A, having failed to register in the previous two matches against them.

Inter have that huge top-of-the-table clash with neighbours Milan to look forward to next Sunday, while Lazio are at home to Sampdoria on their return to action in six days.