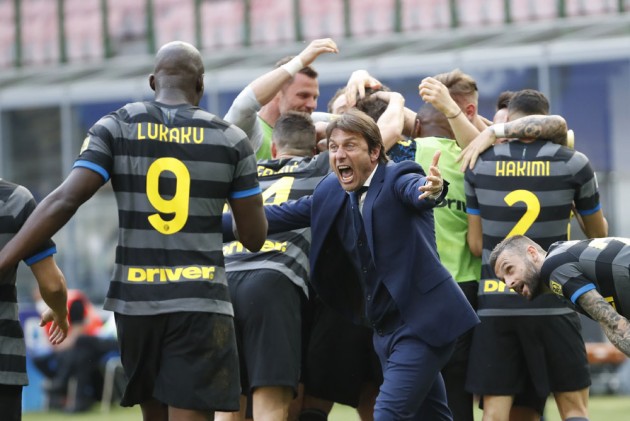 Inter took another significant stride towards a first Serie A title since 2009-10 after a hard-fought 1-0 win over Hellas Verona at San Siro on Sunday.  (More Football News)

The result means Antonio Conte's side are 13 points clear at the league summit, although that could be scaled back to 10 if Milan overcome Lazio on Monday.

Inter struggled for long periods against Verona, but sealed a 13th consecutive Serie A home win for just the second time in their history 14 minutes from full-time courtesy of substitute Matteo Darmian.

The wing-back powered forward, collected Achraf Hakimi's pass and slotted past Marco Silvestri from 10 yards to help his side return to winning ways after two draws in the top flight.

Inter started sluggishly and could have fallen behind shortly after the midway point of the first half.

Samir Handanovic got down well to keep out Daniel Bessa's initial effort before Federico Dimarco dragged his follow-up strike narrowly wide with the goal at his mercy.

The hosts rarely looked like scoring during a tepid opening 45 minutes and went in at the break having had just a solitary shot on target.

Lautaro Martinez was denied by Silvestri shortly after the hour as Inter continued to struggle following the restart.

Hakimi went agonisingly close to breaking the deadlock after 69 minutes but his superb 25-yard free-kick crashed against Silvestri's left-hand post.

With Martinez and Romelu Lukaku misfiring, it was left to Darmian to snatch three points, the former Manchester United man showing superb composure to slot home his third league goal of the season in the 76th minute.

What does it mean? Inter do just enough

It was far from pretty but Conte will scarcely care, with his side well on course to wrap up the Scudetto with games to spare.

Hakimi was denied a goal by the upright, but he was heavily involved in Darmian's winner. The Moroccan is one of only two defenders in the top five European leagues this season to have scored at least six goals and made as many assists, sharing that honour with Atalanta's Robin Gosens.

Lukaku has been in superb form this season, but the Belgium international was well off the pace here, failing to have a single shot. He made a joint game-high three key passes, but that will be scant consolation for a player who is four goals behind Cristiano Ronaldo in the race for the Capocannoniere.

- Inter have won 13 consecutive home games in Serie A for the second time in their history, having previously done so in May 2011.
- Verona have lost four consecutive Serie A for their first time since May 2018 (seven in that occasion).
- Inter have averaged 1.17 goal per game in their past six league matches (seven goals), after scoring an average of 2.5 in their previous eight (20 goals).
- Lukaku has played more Serie A minutes without scoring against Verona (347) than any other club.

Both sides are in Serie A action on Saturday, with Inter travelling to Crotone and Verona hosting Spezia.