Juventus ended Inter's 100 per cent start in Serie A, with Gonzalo Higuain striking 10 minutes from time to send the Bianconeri top. 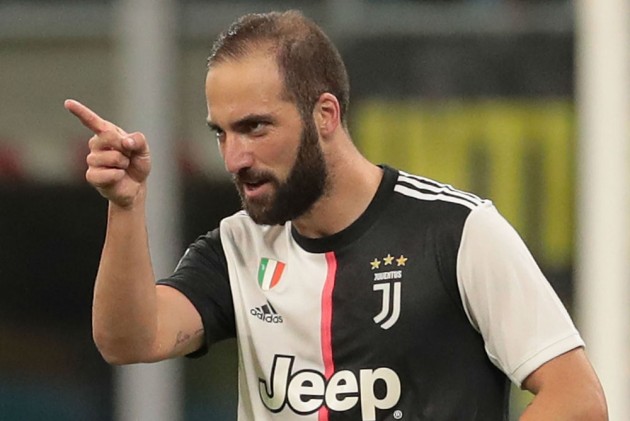 Gonzalo Higuain sent Juventus top of Serie A - and handed Antonio Conte his first league defeat as Inter boss - as the reigning champions secured a 2-1 victory at San Siro.

Higuain started on the bench but the experienced striker once more came up with the goods for Maurizio Sarri, who he has played under at Napoli and Chelsea, guiding home the winner 10 minutes from time.

Paulo Dybala was deployed in the first XI at his compatriot's expense and took just four minutes to break the Derby d'Italia deadlock, but Lautaro Martinez equalised from the penalty spot after a handball by Matthijs de Ligt.

Although Inter rattled the post through a deflected Matias Vecino shot, a sweeping Juve move ended with Rodrigo Bentancur teeing up fellow replacement Higuain to ensure the Bianconeri remain the only unbeaten side in Italy's top tier.

Sarri's decision to select Dybala quickly paid off, the Argentina international latching onto Miralem Pjanic's lofted throughball and blasting inside the far post.

Cristiano Ronaldo rattled the crossbar before De Ligt blocked Nicolo Barella's cross with a raised arm and Martinez slotted the resulting penalty into the bottom-left corner in the 18th minute.

Wojciech Szczesny made a fine save from Martinez to keep the scores level and, after Inter lost Stefano Sensi to injury, Ronaldo had a goal ruled out for a marginal offside decision against Dybala.

Sarri sent Higuain on for Federico Bernardeschi in the 62nd minute and, following Vecino's effort that struck the post, he beat Samir Handanovic at the end of a slick move.

Vecino was kept out by Szczesny after a clever pass from Danilo D'Ambrosio with five minutes remaining as Juve held on to strike an early blow in the title race.

What does it mean? Juve looking like a Sarri team

Inter took little time to get to grips with Conte's system, but the same could not be said for Juve under Sarri. However, the Bianconeri played some lovely football in Milan and looked particularly dangerous in attack.

If Sarri can continue to have Dybala, Higuain and Ronaldo firing, Juve will be a force to be reckoned with this season.

Having initially struggled to break into Sarri's side, Dybala certainly proved his worth with his first goal of the season against Inter. The 25-year-old caused problems with his runs in behind before making way for Emre Can in the 71st minute.

Romelu Lukaku sat out the defeat to Barcelona on Wednesday due to a muscular injury and looked rusty. The striker failed to register a single shot on target and his link-up play was poor.

3 - Gonzalo #Higuaín has scored only three of his 119 #SerieA goals as a substitute, the last was back in May 2017 against Torino. Crucial. #InterJuve #derbyditalia

- Juventus have won eight of their last 14 Serie A encounters against Inter (D5 L1), four of those wins having come at San Siro.

- Antonio Conte has lost his first Serie A match as Inter boss - his first defeat in charge of Juve in the competition was against Inter.

- Lautaro Martinez has scored the first penalty for Inter against Juventus in Serie A since Diego Milito back in November 2012.

- Gonzalo Higuain has scored only three of his 119 Serie A goals as a substitute, the previous occasion coming back in May 2017 against Torino.

- Paulo Dybala has scored his first goal in Serie A since April (against AC Milan) and his first away from home since February (against Bologna).

Juventus entertain Bologna on October 19 after the international break, while Inter have an away trip to face Sassuolo the following day.