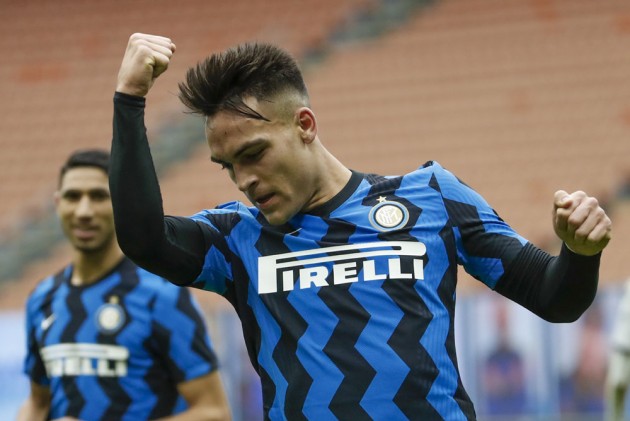 Lautaro Martinez hit a perfect hat-trick and Romelu Lukaku sparkled as Inter defeated Crotone 6-2 at San Siro to turn up the heat on Milan at the start of 2021. (More Football News)

Inter moved top of Serie A at least until Milan's meeting with Benevento later on Sunday as they recovered from a testing first half to ease past their struggling visitors.

It was all square at the break after Martinez cancelled out Niccolo Zanellato's opener and was in close attendance for a Luca Marrone own goal prior to Vladimir Golemic's equalising penalty.

But Martinez completed his treble following the interval, while Lukaku, involved in the first four Nerazzurri goals, was also on target and Achraf Hakimi swept in the sixth in a fifth straight home win.

Only an apparent injury to the outstanding Lukaku put a slight dampener on a day that had started in laboured fashion.

Crotone struck first as a smart set-piece routine created an angle for Junior Messias to loft in a left-footed cross and find Zanellato all alone six yards out, able to head in via the post.

But Inter were level when Lukaku's excellent reverse pass set Martinez clear to fire right-footed beyond Alex Cordaz, and more fine work from the former Manchester United forward turned the game on its head.

Lukaku seized on Arturo Vidal's tackle in the midfield and fed Nicolo Barella, who was taken wide by a heavy touch but managed to cut the ball back for Marrone to stab into his own net in front of Martinez.

Vidal's next contribution was rather more rugged, however, as he stepped on Arkadiusz Reca's foot in the area to concede a spot-kick - awarded following a VAR review - which Golemic dispatched.

Martinez restored Inter's lead 12 minutes after half-time, keeping his cool on his left foot as Marcelo Brozovic prodded the ball on following a backheel from Lukaku, who got the goal he deserved soon enough, too.

The game's standout performer span away from Sebastiano Luperto and sold Cordaz a dummy to leave a simple finish, although he then indicated an issue with 15 minutes remaining and was quickly substituted.

Martinez remained on the pitch to nod in the rebound when Cordaz saved from Ivan Perisic, Lukaku's replacement, and Hakimi had the final say.

What does it mean? Your move, Rossoneri

Milan are the only remaining unbeaten team in Europe's 'top five' leagues but will have to maintain their pace to keep clear of Inter on this evidence.

The Nerazzurri have won five in a row at home in Serie A for the first time since 2018 and look a match for any opponent with Martinez and Lukaku in top form.

This was Lukaku's 50th Serie A appearance and his tally of 35 goals in that time has only been bettered by five players in the three-point era.

It was the front man's work as Inter's battering ram that was most impressive here, however, finishing with just a single assist from his only key pass but winning both his duels and holding the ball up brilliantly to create the space for Martinez to have seven attempts.

Marrone's own goal under pressure from Martinez epitomised a dreadful outing for the former Juventus defender.

He might have found his own net again early in the second half and was a liability throughout despite weighing in with four clearances, three interceptions and a tackle.

There is no easing back into league action in 2021 as Inter are playing again as soon as Wednesday, visiting Sampdoria. Crotone host Roma the same day.