Inter Milan have a slim chance of reaching the Champions League last 16, but they must beat Shakhtar Donetsk and hope Real Madrid lose. Check match and telecast details 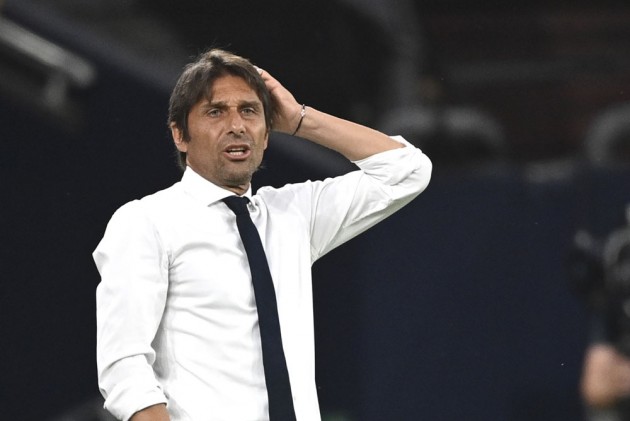 Antonio Conte has told Inter to "dig deep" and not worry about how Real Madrid get on as the tightest of all UEFA Champions League groups heads for a thrilling finale. (More Football News)

Inter looked "down and out", according to coach Conte, after they followed up draws with Shakhtar and Borussia Monchengladbach by losing home and away to Madrid. But Zinedine Zidane's Spanish giants have since faltered, losing to Shakhtar last week, and Inter picked up a first win.

That has created an unusual situation where each of the four teams in Group B stand a chance of achieving the top-two finish required to advance to the knockout stage. It means Thursday's final round of games could see high drama. Should bottom side Inter beat Shakhtar, they will reach the last-16 stage providing Madrid lose at home to Borussia Monchengladbach.

Such a prospect cannot be written off, with Gladbach looking to hit back after a 3-2 defeat to Inter last week and Madrid on an inconsistent run of form.

"We need to focus on the facts. We have to win our match," Conte said. "We have problems going into the game. We have issues with the starting XI, but we need to dig deep... Last week we were down and out, but now we are back in it. We have to win the game. That is what matters most. As for the rest, I am not worried."

Conte certainly does not expect Madrid to play with a plan to force the draw in their clash with Gladbach, even though that would see Zidane's men through if Inter beat Shakhtar.

"We are talking about the Champions League. We are not talking about a local pub tournament," Conte said, replying to a question floating that idea. "It is worrying if we hear these kinds of things such as teams only playing for a draw."

The encounter will be the third time Inter and Shakhtar have faced each other in 2020, with the first of those resulting in a 5-0 win for Conte’s side in the Europa League semi-finals.

The Nerazzurri will inevitably be looking to Romelu Lukaku to provide the big threat to Shakhtar, with the former Manchester United striker having been directly involved in 17 goals in his 15 matches in the Europa League and Champions League for Inter (13 goals, 4 assists). The Belgian has four goals in four Champions League appearances this season, which is as many as he plundered in his previous 14 matches in the competition. Those four goals have come from just 12 shots, with Lukaku converting three of his five opportunities defined by Opta as 'big chances'.

Inter have midfield problems, with the likes of Matias Vecino, Radja Nainggolan and Arturo Vidal set to miss the crunch game. Vidal was injured in the weekend Serie A win over Bologna, with Conte saying it would be "too risky" to play the former Barcelona man on Thursday.

Shakhtar will be certain of going through should they win, and a draw may also be enough for the Ukrainians.

"We have only one option available. We will do our all to win," Conte said.

When and where to watch Inter Milan vs Shakhtar Donetsk football match?