Inter Milan Win Serie A 2020-21: What Next For Nerazzurri After Ending Scudetto Drought?

Still to this day, Inter Milan remain the only Italian club to complete the Serie A, Champions League and Coppa Italia treble 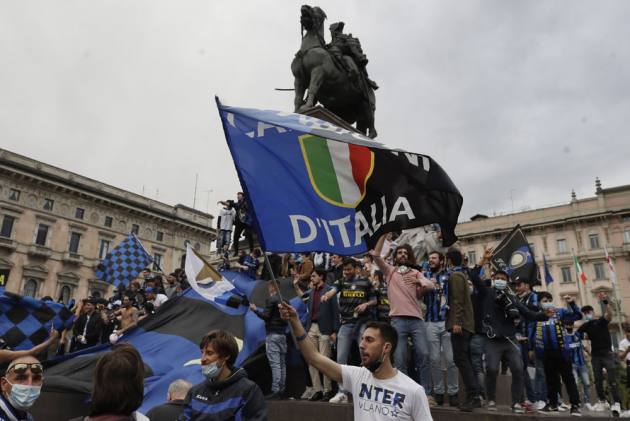 Still to this day, Inter remain the only Italian club to achieve the feat, having claimed the Champions League for the first time in 45 years.

Not since 2010 had Inter got their hands on the Scudetto, while up until 2020, the Nerazzurri had gone eight consecutive Serie A seasons without a top-two finish – ending a campaign as low as ninth in 2012-13.

Criticism was directed at Inter when former Juventus chief executive Giuseppe Marotta turned to a Bianconeri great and rival to restore the club's fortunes in Milan.

After instant improvement in 2019-20 – a runners-up finish in Serie A to go with a run to the Europa League final and Coppa Italia semis – Conte delivered, breaking Juve's stranglehold on Italian football this season.

Inter's triumph ended a run of nine successive Scudetti for Juve, three of which were won by Conte when he was in charge of the Turin giants from 2011 to 2014.

"Those who played with Inter or have been a coach at Inter realise it's a complicated situation," Conte told Sky Sport Italia amid the celebrations. "You have to understand the various dynamics, at times play along, but never lose your identity and I never lost my identity.

"I think that was appreciated by those who at first had turned their noses up at me because of my past. I was brought to Inter in order to bring it back to victory within three years and I did that."

While there are four rounds remaining, Inter will be starting to plan for 2021-22 and as a sea of blue and black shirts flood the Milan streets, what is next for Conte and his team?

The former Italy boss is only the second coach in Serie A history to win a Scudetto with both Inter and Juve, joining Giovanni Trapattoni, though his greatest achievement might just be the transformation of Christian Eriksen from flop headed for an exit to the face of Inter's XI.

Conte ended Inter's 11-year drought and while many involved with the Nerazzurri hope it is the start of a winning cycle, his future at San Siro remains uncertain.

The 51-year-old has spoken out against the club's hierarchy previously, particularly at the end of last season amid serious concerns he would be resign or be sacked.

His position is once again in the spotlight as he reportedly plans to meet with Inter president Steven Zhang.

Suning Holdings Group owns Inter after the Chinese company acquired a majority stake in the club in June 2016, but rumours persist that a sale could happen due to the economic fallout caused by the coronavirus pandemic.

Contracted until the end of next season, Conte – never one to shy away from his opinions – is believed to want clarity over Suning's position and whether he will be able to strengthen his squad in the transfer window.

"We certainly focused on the present, as this was too important to get it done and bring Inter back to winning the Scudetto after so many years out," Conte, who was also criticised for his style of football, told Sky Sport Italia on Sunday.

"The president has arrived now, there are four games left. As I have more experience, I now also want to enjoy this moment, because in the past I got myself caught up in other problems and didn't really enjoy it enough.

"There will be time to talk together, to understand the situation, try to organise ourselves and see what comes out of it. However, at the moment, I want to enjoy this with the players, the club, the fans and everyone, because we all earned this. I don't want anyone to disturb what we achieved."

While Marotta is hopeful over Conte's future, it remains to be seen whether he will be back to defend Inter's crown.

Inter's precarious financial position could have an impact on Conte's trusted talisman – Lukaku.

Like Conte, Lukaku arrived at Inter amid criticism and doubts over his ability to spearhead the club's title charge. Forking out a club-record fee to prise the Belgian star from Manchester United in 2019 did little to alleviate expectations.

Lukaku scored 34 goals in his debut season at San Siro, 23 of those coming in Serie A. The 27-year-old has well and truly silenced his critics again this term with 21 goals and 10 assists in the league thus far.

Not since his final season at Everton has Lukaku attempted or completed more dribbles (97 and 52 in 2020-21), meaning he is back facing the goal again, involved in 13 counter-attacks – his most since 2014-15. He also has 10 assists for the first time.

Yet Lukaku is still taking the largest share of his touches in the box to date (18.3 per cent), leading to a career-high 35 big chances.

From such positions, he can afford to squander 17 big chances and net only 16 non-penalty goals from efforts worth 16.8 xG, another new benchmark.

Lukaku is now scoring with a staggering 23.6 per cent of his shots – making him the first Serie A player since 2004-05 to tally 20 goals and 10 assists in the same season.

His exploits reportedly have Real Madrid, Barcelona, Chelsea and Manchester City queuing up to exploit Inter's economic situation and sign their prized asset.

Refusing to cash in on Lukaku could go a long way in convincing Conte and shaping Inter's future for years to come.

Make a splash in Champions League

But for all of Inter's success this season, their Champions League campaign left a sour taste.

Inter – Europa League finalists in 2019-20 – looked on track to reach the Champions League last 16 in a group featuring Madrid, Borussia Monchengladbach and Shakhtar Donetsk. Instead the 2009-10 winners finished bottom. Conte's Inter also failed to make it out of the group last season, taking a backseat to Barcelona and Borussia Dortmund in the Champions League.

While Inter's early Champions League exit aided their Scudetto charge this term, the club and their fans are craving European delight.

Only twice since Mourinho's treble-winning campaign – before a six-season Champions League absence – have Inter made it out of the group stage of Europe's elite club competition.

"We are thinking about tactics all the time [in Italy] and this is our mentality. If you see the game of the Italian league, it is a very strong game, if you think that is boring, in the stands it is not boring because if you are involved, you have to take an aspirin after the game because it's so strong. If you see the Spanish league, it looks like they play slow, but when you play against the Spanish teams, [sometimes] you don't touch the ball because you don't know where they are.

"So it's a question about the mentality and everything. To win in Europe in my opinion, you have to play to win. And probably you find either the clubs like Paris Saint-Germain and Manchester City, like this team that if you read the line-up specially at the top… the talent and the quality, class is the difference in Europe. I don't know what is in the mind of Conte or of the management of Inter, but in Europe, I think that you need the world-class players."

With four games remaining, Inter – 13 points clear atop the table – have matched their points (82) and clean sheets (14) totals for the whole of last season, when they finished a point behind Juventus.

Inter have the stingiest defence in the league, having only conceded 29 goals in 34 matches so far.

Samir Handanovic – a loyal Inter servant – has contributed greatly with 14 clean sheets but the long-serving goalkeeper appears on the decline.

Errors have crept into Handanovic's game during the backend of this season. The 36-year-old, who joined from Udinese in 2012, has three errors leading to goals, compared to just one last term.

Among the goalkeepers for the top seven clubs in the league in 2020-21, only Roma's Pau Lopez recorded more (four). For comparison, Milan star Gianluigi Donnarumma (two) and Juventus' Wojciech Szczesny (one) are next on the list – Napoli's David Ospina, Lazio shot-stopper Pepe Reina, Atalanta's Pierluigi Gollini and reported Inter target Juan Musso of Udinese have none to their name.

Among that same list, Handanovic has conceded the highest number of goals outside of the penalty area (five), while his three dropped shots are only exceeded by Donnarumma and Reina (both four). In 2019-20, Handanovic finished with only three goals conceded outside the box and three drops.

Musso has emerged as a strong option for Inter and if they want to take the next step in Europe while fending off a domestic challenge, it may be time to move on from Handanovic.