Antonio Conte was swept along with the drama of a San Siro battle against Fiorentina, but he said Inter must improve on the defensive side 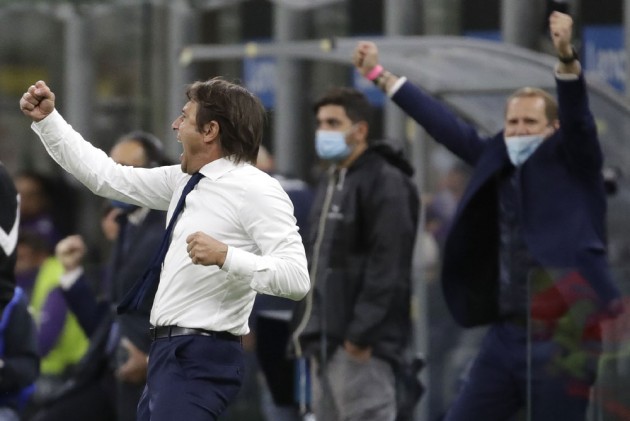 Antonio Conte enjoyed seeing his substitutions pay off as Inter claimed a roller coaster 4-3 win over Fiorentina in Serie A, but warned championships are not won with cavalier football. (More Football News)

Inter came from behind with two goals in the final five minutes of a wild game in their season opener against Fiorentina at San Siro on Saturday.

Franck Ribery was outstanding for Fiorentina and teed up two goals in the second half, with substitute Dusan Vlahovic squandering a chance to give the visitors a 4-2 lead after another exceptional piece of play from the veteran Frenchman.

Ribery was hauled off after 83 minutes, with Fiorentina taking the chance to give him a rest, but the Viola were then rocked by late goals from Romelu Lukaku and Danilo D'Ambrosio that earned 2019-20 Europa League runners-up Inter all three points.

Inter head coach Conte sent on Achraf Hakimi and Alexis Sanchez, and it was their crosses that led to the late goals. Like Hakimi, former Barcelona player Arturo Vidal was introduced off the bench for a Nerazzurri debut in the second half.

Conte said via Inter's website: "The changes brought benefits. I am happy and the guys know it. It will be a long and tiring season. There will be room for everyone and everyone will be needed.

"The three points are important, we have had many chances and we found the way to goal four times.

"This is the positive aspect but at the same time we cannot concede three goals like this."

1 - For the first time in their history, #Fiorentina have scored 3+ in a single game against Inter in Serie A and have lost the match. Sad.#InterFiorentinapic.twitter.com/xSOwJjzFbW

The former Juventus and Italy boss said Inter lacked the right balance between defence and attack.

"In this respect we were not careful and we need to improve," Conte said. "If you want to play high-level championships, balance is the basis of everything."

Conte also saw signs from Christian Eriksen that the former Tottenham midfielder could have a big role to play this season, having struggled to adapt to Serie A last term.

"Compared to when he arrived he has increased the engine revs, he is playing in his ideal position," Conte said.

"I think he had a good game. We are working with him because we know he has important qualities.

"I have faith in him, he is a guy who trains very well and makes himself available to the team. I hope he will soon be able to strike the spark that will take him to the maximum."