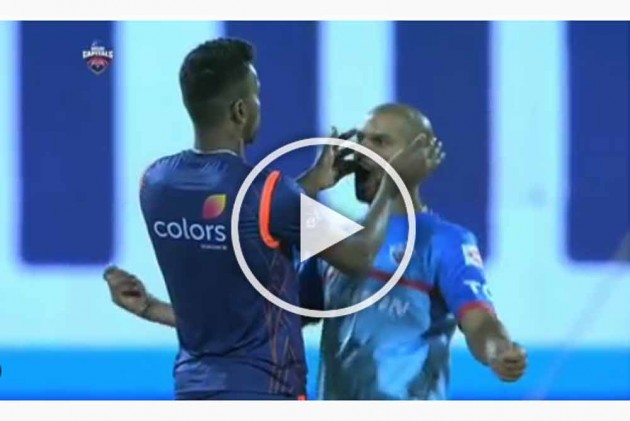 They might have lost the game to Mumbai Indians (MI) by 40 runs, but Delhi Capitals (DC) opener Shikhar Dhawan had a fun time when MI all-rounder Hardik Pandya met him before the game at the Ferozeshah Kotla on Thursday night. The two were seen sharing a hug as the bromance was clearly on display.

IPLT20 posted the video on their Instagram which read: "Even Gabbar cannot withstand the effect of having Hardik Pandya around."

Chasing 169, DC made a mess of the target after Dhawan was dismissed for 35 in the 7th over of the innings by Rahul Chahar. After a quality start of 48/0 in the first six overs, Dhawan's wicket opened the floodgates as Chahar kept picking up wickets and finished with figures of 3/19 from his four overs.

While Chahar sent back Dhawan, Prithvi Shaw (20) and skipper Shreyas Iyer (3), Krunal Pandya sent back the dangerous Colin Munro (3) as Delhi were never really in the chase on a low and slow Kotla wicket.

Earlier, Hardik Pandya (32 off 15 balls) and Krunal (37 not out) provided the late order flourish as Mumbai Indians scored 168/5 in their 20 overs. Having bowled a disciplined line and length through the innings, the DC bowlers lost the plot in the last five overs as the MI batsmen picked up 64 runs.

While Krunal was the anchor during the 54-run partnership, Hardik once again showed why he is such a dangerous batsman in the death overs as he used the long handle to excellent effect to dig out the low full tosses and attempted yorkers and sent them over the ropes till Kagiso Rabada dismissed him off the third ball of the 20th over.