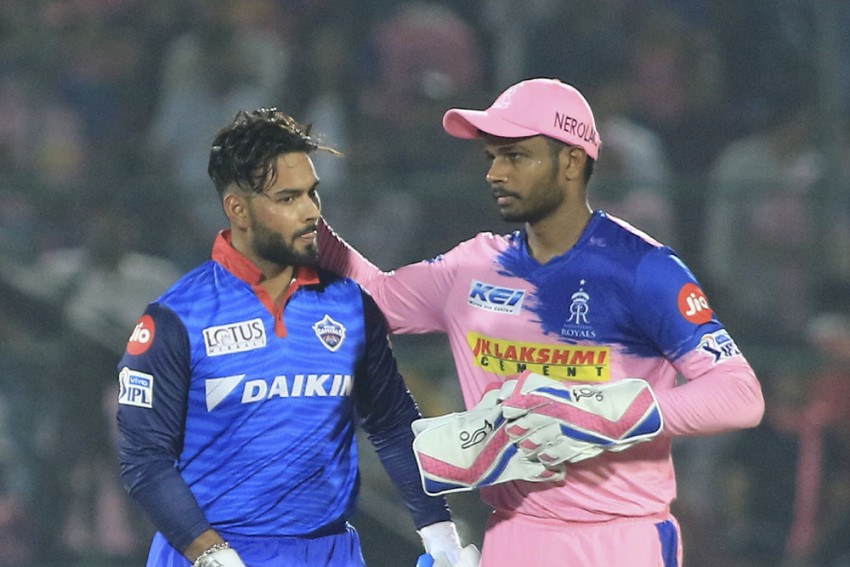 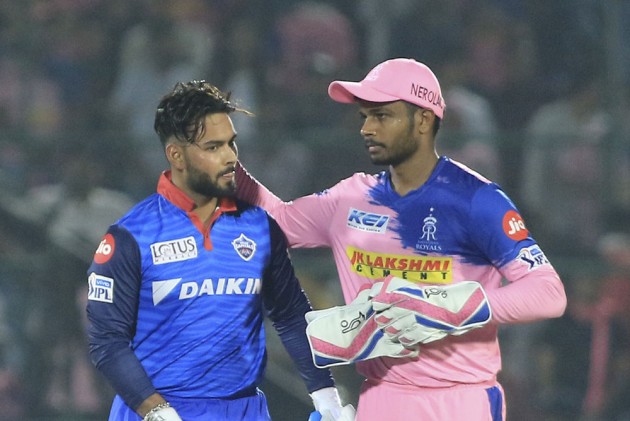 Delhi Capitals crushed Rajasthan Royals' playoff hopes with a convincing five-wicket victory to finish off the league campaign in the ongoing Indian Premier League on a high note in Delhi on Saturday.

Already through to the playoffs, Delhi Capitals first rode on veterans Ishant Sharma and Amit Mishra's superb efforts with the bowl to restrict Rajasthan Royals to 115 for nine and then chased down the target in 16.1 overs, with Rishabh Pant remaining unbeaten on a 38-ball 53.

The win lifted Delhi to the second spot in the standings with 18 points from 14 games but to finish as the second best side, the Capitals would need Mumbai Indians to lose against Kolkata Knight Riders on Sunday.

A win for Mumbai would automatically drop Delhi to the third spot as they have an inferior net run-rate.

Rajasthan are out of the tournament, finishing with just 11 points from 14 games.

Man of the match: Amit Mishra

7:18 PM IST: Rishabh Pant hits Ish Sodhi for a six to reach his fifty, in 38 balls, and give Delhi a five-wicket win with 23 balls remaining.

7:16 PM IST: Axar Patel is the new man. Rishabh Pant takes a single off the third ball, then another single. Pant hits the next ball for a six. 15 runs from the over. DD-115/5. They need one.

7:10 PM IST: Varun Aaron returns for his second over. Expensive over. Rishabh Pant hits the fifth ball for a six over fine leg boundary, then a four to deep backward point. 16 runs from the over. DC-100/4 after 15 overs. They need 16 runs from 30 balls.

7:03 PM IST: Ish Sodhi returns for his third over. A dot to Colin Ingram, then two singles. Then the wicket of Ingram, caught off the glove trying to sweep. Good take from Ajinkya Rahane. FoW-83/4 (13.4 Over). Sherfane Rutherford is the new man. Three runs from the over. DC-84/4 after 14 overs. They need 32 runs from 36 balls.

6:33 PM IST: Riyan Parag runs into Rishabh Pant. The Delhi wicketkeeper hits the third and fourth balls for successive sixes. 14 runs from the over. DC-60/2 after seven overs. They need 56 runs.

6:18 PM IST: Ish Sodhi on a hat-trick. But Rishabh Pant fends off. Shikhar Dhawan holes out at mid on, caught by Riyan Parag, then Prithvi Shaw chops the second ball into the wicket. Double wicket maiden. DC-28/2 after four overs.

6:13 PM IST: 13 runs from the third over, bowled by Oshane Thomas. Shikhar Dhawan hits the first and third balls for fours, then Prithvi Shaw finishes off with a four. RR-28/0.

6:03 PM IST Krishnappa Gowtham starts with a six-run over, all singles. Shikhar Dhawan and Prithvi Shaw opened for Delhi.

5:44 PM IST: Trent Boult on with the last over. Riyan Parag changes his bat, going for a heavier one. And a six off the first ball, over long off. A single to long off. Another single, and a six off long-on to register his maiden fifty, in 47 balls. Youngest to do so. A wide. Another wide, not given. Caught at mid-off by Rutherford. He made 50 off 49. RR-115/9.

5:38 PM IST: Keemo Paul pulls up off his run up. Hamstrung. And his teammates are helping him. Sherfane Rutherford will complete the over, five balls remaining. Three from the over. RR-100/8 after 19 overs. Riyan Parag on 37 off 44.

5:24 PM IST: What an over from Ishant Sharma. The experienced plays into the young Riyan Parag. After three good overs, the Delhi boy leaks 18 runs from his last over, for figures of 3/38. Parag hits the third and fourth balls for successive fours. There were two and three wides too. RR-93/7 after 17 over.

4:59 PM IST: Amit Mishra had Shreyas Gopal stumped, then had Stuart Binny caught behind. Then Trent Boult drops the hat-trick catch. one run from the over. RR-58/6 after 12 overs.

4:44 PM IST: Keemo Paul, right-arm fast medium, gets his first over. Seven runs from the over, including a four off the third ball, hit by Riyan Parag to mid-off. RR-51/4 after nine overs. Time out.

4:40 PM IST: Experienced Amit Mishra on. Busy over. Riyan Parag hits the fifth ball for a four to mid-wicket. Nine runs from the over. RR-44/4 after eight overs.

4:35 PM IST: Axar Patel on with his second over. Very good over from the spinner. Five singles. RR-35/4 after seven overs.

4:31 PM IST: Ishant Sharma on and gets his third wicket. Mahipal Lomor caught behind. FoW-30/4 (5.2 Over). The youngster gets out just after getting a four off the first ball. This has been the trend. You hit Ishant for a boundary, and a wicket follows. Another youngster, Riyan Parag arrives for Rajasthan. Four runs from the over. RR-30/4 after six overs. Both the batsman on zero off four balls each.

4:26 PM IST: What was that? No, no and no from Mahipal Lomror. But Sanju Samson runs himself out off a misfield. Not even on the frame when Prithvi Shaw returns the ball to wicketkeeper Rishabh Pant. FoW-26/3 (4.2). Samson made five off eight. Shreyas Gopal is the new man. And four dots. Two runs from the over. RR-26/3 after five overs.

4:21 PM IST: Ishant Sharma on with his second over and gets the wicket of Liam Livingstone after getting hit for a four off the third ball. FoW-20/2 (3.5 Over). Livingstone made 14 off 13. 19-year-old Mahipal Lomror, left-handed batsman, is the new man. A four, down to long leg. Nine runs from the over. RR-24/2 after four overs.

4:15 PM IST: New man Sanju Samson takes a single off the fist ball, then another off the last ball. In between a single and a wide. Four runs from Trent Boult's second over. RR-15/1 after three over.

4:09 PM IST: Ishant Sharma beats Liam Livingstone twice, then the lanky pacer errs the length and pays the price. A length ball in the arc and Livingstone whacks over midwicket for a six. A single, a dot, then a simple catch wide fine leg, by Shikhar Dhawan. Ajinkya Rahane gone. FoW-11/1 (2.0 Over). Seven runs from the over.

4:04 PM IST: Trent Boult starts the proceedings with a four-run first over, all singles. Ajinkya Rahane and Liam Livingstone are the openers from Rajasthan.

3:36 PM IST: Two changes each for both the teams. Ish Sodhi and Krishnappa Gowtham in for Steve Smith and Jaydev Unadkat for RR. Keemo Paul and Ishant Sharma in for Jagadeesha Suchith and Chris Morris for DC.

2:03 PM IST: Meanwhile, here's how you can watch Virat Kohli's final IPL match of the season, ahead of the Cricket World Cup.  RCB's early exit from the IPL 2019 could be a blessing in disguise for India as their captain and batting mainstay will have enough time to introspect and heal the bruised body.

Delhi are without Kagiso Rabada, this season's highest wicket-taker. But the hosts will take heart from the fact that they are in playoffs for the first time in seven years, and now is the time to consolidate their position in the final standings. A big win on will not only boost Delhi's morale after the 80-run hammering at the hands of Chennai Super Kings (CSK) but it could also propel the side to the second position in the eight-team standings.

And up against them are a depleted Rajasthan. The Royals are mathematically still alive in the tournament with 11 points from 13 games. And their job now is to win the match and hope for the best. Because their chance of progressing to the next stage is heavily reliant on other results.

With Steve Smith having departed home for Cricket World Cup 2019 preparations, Ajinkya Rahane will return to captaincy duties. Ashton Turner, who made whole of Indian gasp during the ODIs, is expected to replace Smith in the playing eleven.

The departure of Smith, Jos Buttler and Ben Stokes has weakened Rajasthan's batting, putting more responsibility on the shoulders of Rahane, Sanju Samson and Liam Livingstone. But the team's bowling unit would be pumped up after the leg-spinner Shreyas Gopal's hat-trick in the rain-truncated match against already-eliminated Royal Challengers Bangalore.