Riding on Suresh Raina's unbeaten 57 and Jadeja's 31, CSK pulled off yet another victory in the last over. KKR will be pretty disappointed that they weren't able to contain Jadeja in the end, especially after taking finisher specialist Dhoni's wicket. Catch the highlights of KKR Vs CSK here: 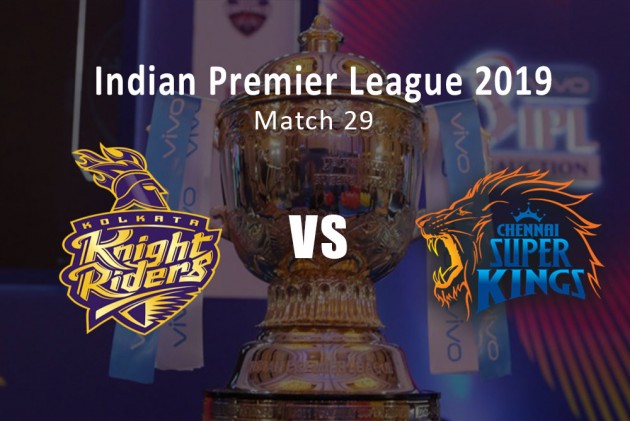 CSK is one such team that takes the game till the end and feed son the opposition's nerves. Typical Dhoni kind of play. Dhoni wasn't able to finish the game for them today. But Jadeja played a useful cameo of 31* in 17 balls in the end. The 16 runs off the penultimate over was the turning point for CSK.  The defending champions know how to win games.

KKR would have believed that the game was in their favour, once Dhoni fell. But Sir Jadeja appeared and swept the game away. Not to forget Suresh Raina's innings. He paced it well and carried it till the end. No wonder he is known as Mr IPL.

Chennai move to 14 points and are on the top of the table. Catch all the highlights of KKR Vs CSK here:

7:42 PM IST: Poor start from Chawla. Went for the faster one. Pitched short and wide. Jadeja slashes hard. Takes an edge and runs down to the third man fence. A couple of singles. And Jadeja hits one in the deep cover region. Thats it. CSK win yet another match in the final over. What a cameo from Jadeja. CSK win by 5 wickets.  Jadeja 31*(17) Suresh Raina 58*(42)

7:38 PM IST: Poor poor bowling from Gurney. Three boundaries on the trot by SIR Ravindra Jadeja. 16 off the penultimate over. CSK require 8 off 6 balls.

7:34 PM IST: Narine is back for his last over. He has bowled brilliantly today. Short ball and Raina rocks back and pulls it to the boundary at the deep midwicket region. Just 8 runs off the over. CSK 138/5 after 18 overs. CSK require 24 in 12 balls. Will Raina be able to carry them home today?

7:25 PM IST: Excellent over by Narine. Just one run and trapped Dhoni in front of the wicket. Dhoni departs. He went for the review. But it was hitting the leg stump. CSK 121/5 after 16 overs. CSK in trouble.

6:59 PM IST: Second wicket for Piyush Chawla. He traps Kedar Jadhav in front off the first ball. FoW-81/4 (11.1 Over). And enters M Dhoni. A single off the first ball for the CSK captain. Chawla continues to target Dhoni's leg stump. Top over from Chawla. Two runs and a wicket. CSK-83/4 after 12 overs. They need another 79 runs from 48 balls.

6:50 PM IST: Piyush Chawla strikes in his first over. He had Ambati Rayudu caught at cover by Robin Uthappa. FoW-61/3 (9.1 Over). Rayudu made 5 off 11. But the new man Kedar Jadhav hits the fourth and fifth balls for successive fours. Nine runs from it. CSK-70/3 after 10 overs. They need another 92 runs from 60 balls.

6:39 PM IST: Ten runs from the Sunil Narine's second over, including a four off the fifth ball, hit by Suresh Raina. CSK-57-2 after eight overs. They need another 105 runs from 72 balls.

6:24 PM IST: Two fours, off the third and sixth balls, both hit by Suresh Raina as Prasidh Krishna leaks eight runs from his second over. CSK-44/1 after five overs.

6:19 PM IST: Harry Gurney, targeting the stumps, wraps Suresh Raina in front. Decision made, but Raina challenges. But there's an edge. And it's thick. That happened off the fourth ball. Raina then flicks the next ball for a four, to deep mid-wicket. Sublime. A single to end the over. CSK-36/1 after four overs. They need another 126 runs.

6:14 PM IST: Harry Gurney traps Shane Watson with the first ball of his second over. FoW-29/1 (3.1 Over). That brings Suresh Raina in the middle. Watson made six off seven.

6:12 PM IST: Harry Gurney concedes three singles from the second over. But Andre Russell, after strting the third over with a single, gets hit for four back-to-back fours by Faf du Plessis. Russell struggling with his running, complets the over with a beautiful bouncer. 16 runs from the over. CSK-29/0 after three overs. They need 133 runs. Meanwhile, Russell is off the field.

6:03 PM IST: What a way to begin the chase. A four off the first ball hit by Shane Watson, then a four off the third ball ht by Faf du Plessis. 10 runs from Prasidh Krishna's over.

5:42 PM IST: Shardul Thakur on with the last over of the match. A wide to Piyush Chawla to start. A single. Thakur stops a brutal straight drive on the follow through, and he doesn't even flinch. But it will go down as a dropped catch. Shubman Gill takes a double off the next ball. Then, straight to the hands of Ravindra Jadeja at cow corner. FoW-161/7 (19.5 Over).  A brilliant yorker and a run out (Kuldeep Yadav) to end the innings. Four runs from the over. Thakur's figures:2/18. KKR -161/8.

5:31 PM IST: Shardul Thakur gets his first wicket. Dinesh Karthik plays a lofted shot but ends up offering a catch to Faf du Plessis at mid-off. Fourth catch for Faf today. KKR skipper made 18 off 14. Four runs from the over. KKR-153/6 after 18 overs. Piyush Chawla is their new man.

5:18 PM IST: Mitchell Santner completes his spell. Nine runs from his last over, including a four off the fourth ball, hit by Dinesh Karthik. 1/30 for Santner. KKR-142/5 after 16 overs. Time out.

5:07 PM IST: Ravindra Jadeja on with his third over. And Chris Lynn hits three sixes, then a single. A flat six over cover, followed by another six over mid-wicket off the back-foot, then over lon-on for the third six. Dinesh Karthik hi the last ball for a four, to fine leg. 23 runs from the over. KKR-121/3 after 14 runs. Lynn on 82 from 50 balls. Jadeja's figures: 0/49.

4:58 PM IST: Deepak Chahar returns for his third over. A single off the second ball, and Chahar hits Dinesh Karthik on the helmet. Next ball, Chris Lynn frees his arms and the ball sails over fine leg boundary for a six. 10 runs from the over. KKR-91/3 after 12 overs.

4:46 PM IST: Six runs from Ravindra Jadeja's third over, including a four off the second ball, hit by Nitish Rana. KKR-77/1 after 10 overs.

4:39 PM IST: Another nine-run over for KKR as Nitish Rana hits the fourth ball of the for a four. A wide and four singles too. KKR-67/1 after eight overs.

4:35 PM IST: Nine runs from Mitchell Santner's second over, including a six, hit over long ob by Chris Lynn. He is already on 46 off 31 balls. KKR-58/1 after seven overs.

4:30 PM IST: Ravindra Jadeja gets his first over. New man Nitish Rana finds the gap at cover and a four. That happened off the third ball. And Chris Lynn hits the fifth ball for another four. A single to end 11-run over. KKR-49/1 after six overs. One wicket and five runs from the previous over.

4:21 PM IST: Another good over for Kolkata as Chris Lynn hits Shardul Thakur for two fours, off the first and last balls. KKR-33/0 after four overs.

4: 16 PM IST: 14 runs from the third over, bowled by Deepak Chahar. Chris Lynn hits the first ball for a four, then follows it up with a six and another four. KKR-24/0.

4:05 PM IT: Back-to-back fours off the fourth and fifth deliveries as Chris Lynn punishes Deepak Chahar. With the first four, Lynn also completed his 1000 runs in IPL.

ALSO WATCH: Furious MS Dhoni Storms On To The Field

3:40 PM IST:  CSK are unchanged, while KKR have made three changes. Chris Lynn, Sunil Narine and Harry Gurney are back.

3:12 PM IST: CSK are comfortably placed at the top, 4 points clear second placed KKR. So what to expect today? Batsmen have dominated matches at Eden Gardens this season, with a par score of 180. And in three matches, teams chasing have won twice.

3:00 PM IST: Half an hour to the toss! Here's a look at the head-to-head record. CSK have won 13 while KKR were victorious in eight in their previous 22 meetings with one match ending in no result.

In this top of the table clash, CSK will look to complete a league double against KKR even as the two-time champions face a distinct possibility of missing their star all-rounder Andre Russell for the first time this season.

The home side's consistency has suddenly taken a beating after two defeats on the trot, first in Chennai and then against Delhi Capitals, the team from the national capital completing a rare league double. The Dinesh Karthik-led outfit would be under immense pressure to arrest the slide when they face the mighty Chennai.

Those defeats exposed KKR's over-reliance on Russell, who looked ominous, but the opponents figured out a way to strangulate the Windies power hitter to restrict the team to below-par totals.

To make matters worse, the Jamaican is a doubtful starter after aggravating his wrist injury, which he had sustained in Chennai, during Friday's match defeat to Delhi. He never looked at ease during his 21-ball 45 against Delhi.

In contrast, Chennai are on a rampage with six wins out of seven, including three in a row. But in the last match, Dhoni was in the spotlight for wrong reasons.

This match will take place in the backdrop of the latest IPL controversy but the Super Kings will be keen to put it behind them with another dazzling performance.