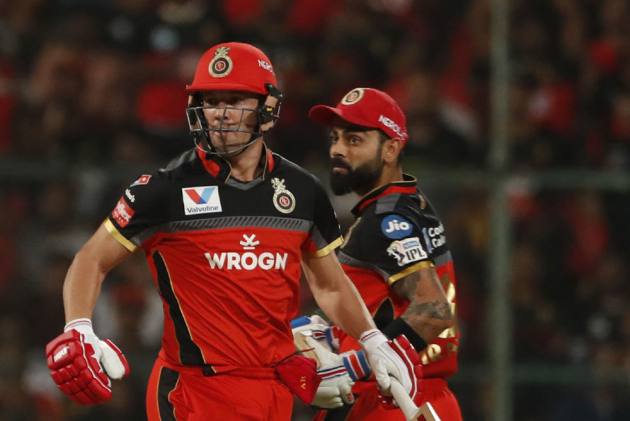 AB de Villiers' unbeaten 82 off 44 balls took RCB to a healthy 202 for 4 and things could have gone awry with young Nicholas Pooran (46 off 28 balls) hitting five sixes at the rear before Navdeep Saini sealed it in the 19th over. KXIP finished at 185 for 7 as RCB are now on eight points with three games left.

23:41: Umesh Yadav with the last over. R Ashwin hits the first ball for a six, then out. Virat Kohli takes a good catch at deep. FoW-182/6 (19.2 Over). Ashwin made six off two. KXIP need 21 from four. Hardus Viljoen in the new man. And Yadav is on a hat-trick. He had Viljoen caught behind. Brilliant take from Parthik Patel down the leg side. Murugan Ashwin is the new man. They need 21 from three. Swing and miss, but Yadav misses out on a hat-trick. Then, Kohli drops a sitter at long-off. And nine runs from the last over. RCB win by 17 runs. Three on the trot.

23:35: AB de Villiers takes a stunning catch at long-on to send back David Miller. FoW-173/4 (18.1 Over). Mandeep Singh is the new man. Terrific penultimate over from Navdeep Saini. The youngster had Nicholas Pooran (46 off 28)caught by AB again. A skier. Very good take from the legend. Three runs from the over and two wickets. KXIP-176/5 after 19 overs. They need another 27 runs from six balls and skipper Ravichandran Ashwin is the new man.

23:13: Navdeep Saini returns for his third over. Nicholas Pooran hits the second ball for a flat six, then follows it up with a four. Eight runs from the over. KXIP-143/3 after 15 overs. They need 60 from 30 balls. Time out.

22:46: Yuzvendra Chahal leaks 15 runs from his second over with Mayank Agarwal hitting the third and fifth balls for a six and four respectively. KXIP 101-1. They need another 102 runs from 66 balls. In the previous over, Marcus Stoinis conceded nine runs, with Agarwal hitting the fourth ball for a four.

22:38: Navdeep Saini returns for his second over. Nine runs from it, including two fours, off the second ball hit by Mayank Agarwal and off the fourth ball hit by KL Rahul. KXIP-77/1 after seven overs.

22:31: Yuzvendra Chahal gets his first over and 12 runs from it with KL Rahul hitting the second and third balls for a six and four. KXIP-68/1 after six overs. They need another 135 runs from 84 balls. Time out.

22:27: Tim Southee continues with his second over. He leaks eight runs, including back-to-back fours off the second and third balls, hit by Mayank Agarwal. KXIP-56/1 after five overs. In the previous over, Umesh Yadav conceded 12 runs for the wicket of Chris Gayle.

22:15: What a start to the chase from Kings XI Punja. Chris Gayle hits the first ball of Navdeep Saini's spell, then KL Rahul hits the fourth and fifth for back-to-back boundaries. 13 runs from it. KXIP-36/0 after three. They need 167.

22:10: Umesh Yadav shares the new ball with Tim Southee. A wide and back-to-back fours, both hit by KL Rahul. But Yadav stages a strong comeback. Nine runs from the over. KXIP-23/0 after two overs. They need 180 runs.

22:04: Tim Southee opens the proceedings in the second innings of the match. 14 runs from it, including three fours -- all hit by Chris Gayle. KXIP-14/0. They need another 189 runs.

21:39: Mohammed Shami returns for his last over. A bye. Another bye and back-to-back sixes from AB de Villiers to the same wide long-off area. A full toss, on to the body, and a six over fine leg. Evasive but ball sails over the rooftop. Close to being called a no-ball for height. A leg bye and 21 runs from the over. Shami's figures: 1/53. RCB-175/4 after 19 overs. AB is unbeaten on 75 off 42.

21:32 Fifty with a four in 35 balls for AB de Villiers. He's ready to go big. And hits the next ball, third of the over, for a huge six over long on. And AB wants a new pair of gloves. A wide as AB lays in wait outside off. Another wide on the same corridor. A single, then Marcus Stoinis plays and misses. A double to end Hardus Viljoen's third over. 16 runs from it. RCB-154/4 after 18 overs.

21:18: Som drama about a lost ball. Before the time-out, one of the umpires put the ball in his pocket but forgot and demanded a new ball. Yes, only to realise his forgetfulness later. Ankit Rajpoot returns for his last over. A single to Marcus Stoinis and a four and six off the next two balls as AB de Villiers changes gears. 13 runs from the over. RCB-122/4 after 15 overs.

21:07: Murugan Ashwin on with his third over. After three singles, Marcu Stoinis hits the fifth ball for a six over long-off. 10 runs from the over. RCB-109/4 after 14 overs. Time out.

20:53: One tidy over from skipper Ravichandran Ashwin. Just three singles. RCB-84/4 after 10 overs. 14 runs and three wickets from the last four overs.

20:50: Hardus Viljoen strikes in his first over. His slower delivery doing the trick against Akshdeep Nath (3 off 7). Caught by Mandeep Singh at cover. FoW-81/4 (9.0 Over). Four runs from the over.  Marcus Stoinis is the new man.

20:45: Ravichandran Ashwin introduces himself into the attack and he gets Moeen Ali's wicket. Bowled. FoW-76/3 (7.3 Over). Akshdeep Nath is the new man. Two runs and a wicket from the over. RCB-77/3 after eight overs.

20:41: Moeen Ali is the new man and he gets a streakish four off the first ball faced. Five runs from the over. RCB-75/2 after seven overs.

20:34: Mohammed Shami on with his third over. Back-to-back fours as Parthiv Patel continues to deal in boundaries. A dot ball, then another four. Patel hoicks the fifth ball for a six. 18 runs from the over. RCB-70/1 after six overs.

20:29: Ankit Rajpoot continues with his third over. A dot ball to AB de Villiers, then a four to deep mid-wicket. Misfields from two KXIP fielders results in three off the third ball. Parthiv Patel creams the fourth for a six, straight down the ground. Patel beaten by the pace. A dot. Another dot to end the over. 14 runs from it. RCB-52/1 after five overs.

20:17: Ankit Rajpoot on with his second over. A dot to Parthiv Patel, then a four. Pulled over square leg boundary. A front foot no-ball. Free hit. Another no-ball. Plays on off the free hit. Eight runs from the over. RCB-35/0 after three overs.

20:10: Mohammed Shami on and Hardus Viljoen drops Virat Kohli at mid-off off the first ball. Then Kohli plays a beautiful square drive for a four, then through cover. Back-to-back fours. A single, then Parthiv Patel flicks one past fine leg. A wide. A single to end the over. 15 runs from it. RCB-27/0 after two overs.

20:04: Ankit Rajpoot starts the proceedings. A dot to Parthiv Patel, then a four through point. Back-to-back fours as Patel middles his straight drive. Beautiful. A single, then a double as Virat Kohli plays it to deep backward square. A single to end the over. 12 runs from it.

A look at the Playing XI for the two teams.#RCBvKXIP pic.twitter.com/Wr8zAjOEhp

19:34:  Kings XI Punjab won the toss and ops to bowl first. Two changes for KXIP. Sam Curran and Harpreet Brar miss out. Nicholas Pooran and Ankit Rajpoot come in.  Two changes for RCB too. Dale Steyn has some niggle in the shoulder. Tim Southee comes in. Finally, Washington Sundar gets a game. Pawan Negi misses out.

19:25: Moeen Ali's last match of the season. He has been RCB's strike force with the bat. But, he will have to leave for National duties as England face Ireland and Pakistan before the World Cup.

Royal Challengers Bangalore have found their best touch after they have been pressed against the wall. They need to win almost every game to progress in the tournament. They have won back-to-back games and look eager to give their best shot in getting that playoff berth.  The team's batting heavily depends on Skipper Virat Kohli, AB de Villiers, Parthiv Patel and Moeen Ali.

Moeen Ali will be playing his last match for RCB this season, as he will have to report for the England team which will be playing a series against Pakistan.  He has been RCB's accelerator and has also been handy with the ball. Moeen would look to end his IPL campaign on a high note.

Kings XI Punjab, on the other hand, has an explosive opening duo of Chris Gayle and KL Rahul, both of whom who were former RCB players. They will be eager to give their best shot against their former team. Gayle is a renowned and a favourite figure at Bengaluru and the RCB management will be aware of his power hitting skills especially at Chinnaswamy stadium.

RCB's bowling unit has looked different since the arrival of South African speedster Dale Steyn. They have looked lethal in the powerplays.

The major concern for Virat has been death bowling. Dhoni almost pulled off a miracle against RCB, when he almost chased 26 runs off the last over bowled by Umesh Yadav.

They have been wayward with their line and length, and have been leaking too many runs. Navdeep Saini is one major positive for RCB this season. The tall lanky speedster has been consistently bowling around 150 Kmph and is a great prospect for the franchise.

Yuzvendra Chahal has been exceptional since the start of the season and his spell will be crucial for RCB. It will also be interesting to see the contest between Dale Steyn and Chris Gayle. Dale Steyn has made a dream comeback to the IPL and has played a major hand in the change of fortunes for Virat's side.

KXIP's skipper Ravichandran Ashwin is known for his out of the box strategies. It is to be seen what he pulls out of his thinking hat today to stop Virat and Co. KXIP are also in the bottom half of the points table (5th spot) and with just 4 games in hand, each and every game becomes crucial for Ashwin's boys.