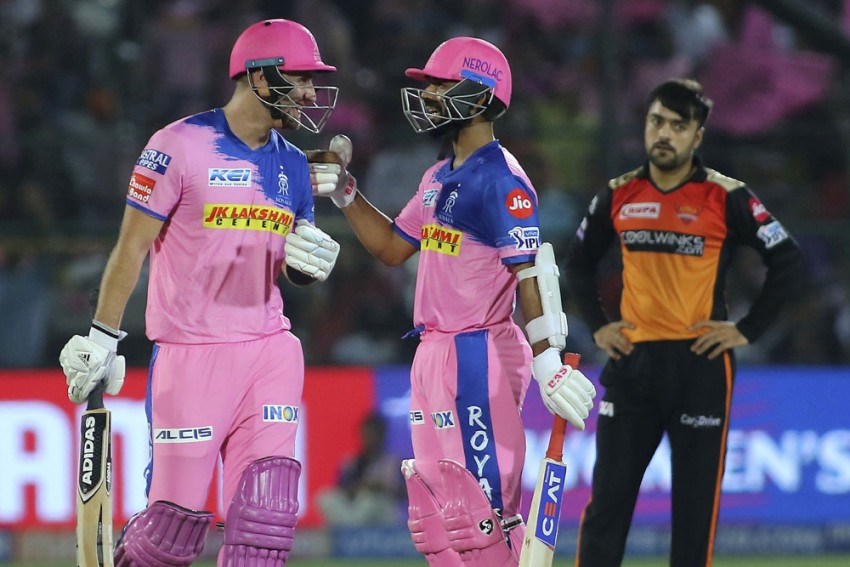 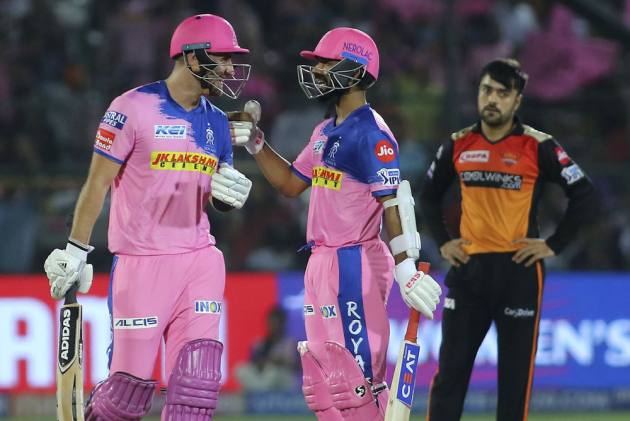 Rajasthan Royals (RR) defeated SunRisers Hyderabad (SRH) by seven wickets to five balls to spare to registered their fifth win of the Indian Premier League (IPL) 2019  season. But the biggest news from the match, or as a result, is Chennai Super Kings (CSK) have become the first team to qualify for the playoffs. RR do have an outside chance to finish in top four, though.

Chasing 161, Liam Livingstone (44 off 26) and Ajinkya Rahane (39 off 34) got RR off to a flying start with the former taking the attack to the opposition. The duo raced off to 78 off 55 balls for the opening wicket, picking up 60 runs off the first six powerplay overs before Livingstone perished.

Then Sanju Samson (48 not out off 32) and skipper Steve Smith (22) held fort and shared 55 runs in 5.3 overs to take Rajasthan within sniffing distance of win before the latter departed. Samson hit the winning runs, a four off the first ball of the last over, bowled by Shakib Al Hasan.

Earlier, Manish Pandey hit a quick half-century before Sunrisers witnessed a middle-order collapse to be restricted to 160 for eight.

Sent into bat, SRH got off to a good start even after the early dismissal of skipper Kane Williamson (13) with David Warner and Manish Pandey sharing 75 runs off just 50 balls for the second wicket before losing the plot after the halfway stage.

Nicely placed 103 for one after 12 overs, SRH lost their next seven wickets for just 44 runs before Rashid Khan (17 not out off 8) played a short cameo towards the end to take the visitors to the 160-run mark.

Jaydev Unadkat won the Man of the Match award for his 2/26.

11:32 PM IST: Siddarth Kaul finishes his spell. Five runs from his last over. But still went for 48 without success. RR-157/3. Then, Sanju Samson hit the first ball of final over, bowled by Shakib Al Hasan, for a four to cow corner to wrap up the match. Rajasthan Royals beat SunRisers Hyderabad by seven wickets with five balls to spare. And they can still hope for a playoff spot, however tough it seems.

10:46 PM IST: Siddarth Kaul continues to struggle with his line. A wide, down the leg, o Sanju Samson. The right-handed batsman hit the reload for a six over the straight boundary. A wide, then two more singles. Good response from Kaul though. RR-89/1 after 11 overs. They need 72 runs from 54 balls.

10:29 PM IST: Liam Livingstone is living a dream here. Already on 43 off 23 balls. He hits the third ball of the eight over for a four, his fourth tonight. And there are three sixes to go with it. Seven runs from Shakib Al Hasan's second over. RR-74/0 after eight overs.

10:25 PM IST: Seven runs from Rashid Khan's second over, including a four off the fifth ball, hit by Liam Livingstone. Khan however had a good shout for an LBW off the previous delivery. RR-67/0 after seven overs.

10:15 PM IST: Khaleel Ahmed on with the fifth over. Good over spoilt by a crafty four off the last ball by Ajinkya Rahane who got a thick top-edge over the short third man. Six runs from the over. RR-40/0 after five overs.

10:06 PM IST: Bhuvneshwar Kumar on with his second over, and 10 runs from the over. Ajinkya Rahane hits the third and fifth balls for fours. RR-18/0 after three overs.

10:02 PM IST: Shakib Al Hasan shares the new ball with Bhuvneshwar Kumar. Four singles from the over. RR-8/0 after two overs. They need another 153 runs.

9:59 PM IST: Bhuvneshwar Kumar starts the proceedings in the second innings of the match. Ajinkya Rahane hits the third ball for a sublime four, through extra-cover. That's all from the over.

9:42 PM IST: Varun Aaron with the last over of the innings. Four byes off the second ball as it beats Bhuvneshwar Kumar and Sanju Samson. And the next ball, Bhuvi holes out at square leg to Jaydev Unadkat. FoW-147/8 (19.3 Over). Rashid Khan ends the innings on a flourish with a four and six. 18 runs from the over. SRH-160/8. Aaron's figures: 2/36.

9:30 PM IST: Dropped and caught is the trend tonight. Wriddhiman Saha gets a life with Shreyas Gopal dropping a sitter at fine leg off the second ball. Two runs taken, but the very next ball, Oshane Thomas had him caught behind. FoW-137/6 (17.5 Over). Rashid Khan is the new man. Thomas completed his spell for 2/28. Saha made five off five.

9:24 PM IST: Varun Aaron drops Shakib Al Hasan off the first ball, but the very next ball, Jaydev Unadkat takes a brilliant return catch to send Deepak Hooda (0 off 1). FoW-127/5 (16.2 Over). Wriddhiman Saha joins Shakib in the centre. Five runs from the over. SRH-131/5 after 17 overs. Three wickets for 24 runs in the last four overs. Mini collapse!

9:18 PM IST: Varun Aaron returns for his third over and gets the wicket of Vijay Shankar, courtesy a very good running catch at deep square leg by Jaydev Unadkat. FoW-125/4 (15.5 Over). Vijay made eight from 10. Deepak Hooda is the new man. Five runs from the over. SRH-126/4 after 16 overs.

9:10 PM IST: Shreyas Gopal returns for his last over. Four singles then Manish Pandey hits the fifth ball for a four, over cover. Then, a brilliant stumping from Sanju Samson ends Pandey's knock. Stunning effort. No one knows what happened. Replays show a caught behind too. And umpires changed the decision, to a caught behind. FoW-121/3 (14.6 Over). Time out.

8:56 PM IST: Stuart Binny gets his first over of the match. A wide to David Warner to start. Manish Pandey hits the second ball for a four, straight. 10 runs from the over. SRH-103/1 after 12 overs. Back-to-back fifties for Pandey.

8:51 PM IST: Jaydev Unadkat back into the attack. Seven runs from the over and for a change, no boundary in the over. SRH-93/1 after 11 overs.

8:38 PM IST: Another good over for SunRisers. Manish Pandey hits back-to-back fours off the third and fourth balls. Ten runs from Shreyas Iyer's second over. SRH-67/1 after eight overs.

8:33 PM IST: Riyan Parag, the brave teenager from Assam, on with his leg-spin. After delivering the first ball, he collided with David Warner at the non-striker's end. A single though. Five more singles. Six runs from the over. SHR-57/1 after seven overs. Time out.

8:29 PM IST: Oshane Thomas on with his second over. David Warner plays the first ball over mid-on. Three runs from it. Manish Pandey creams the fourth over through cover for a four. He looks in fine touch. Ten runs from the over. SRH-51/1 after six overs.

8:25 PM IST: Jaydev Unadkat gets his first over. Good start from the left-arm medium pacer. Three singles, then a four off the fourth, hit by Manish Pandey, over mid-wicket. Two more singles and nine runs from it. SRH-41/1 after five overs.

8:14 PM IST: Minefields continue. Stuart Binny fails to stop the ball at cover and two runs from the third over. Kane Williamson hits the next ball through cover. Varun Aaron leaks eight runs from his second over. SHR-27/0 after three overs.

8:10 PM IST: What's happening? A similar start to the second over. Three overthrows. Liam Livingstone once again the culprit, throwing from the backward point. Then, Varun Aaron let the ball slips past him at third man as Kane Williamson gets his first boundary. 10 runs from Oshane Thomas' first over. SRH-19/0 after two overs. RR players distributing freebies.

8:05 PM IST: Varun Aaron opens the proceedings. A single to David Warner, and four overthrows. A dot to Kane Williamson. Another dot and a single. Another misfield, this time from Jaydev Unadkat and three runs off the last ball. Nine runs from the over.

7:56 PM IST: Meanwhile, Simon Taufel has defended Ravichandran Ashwin's mankading of Jos Buttler, but has criticised MS Dhoni for 'crossing the line'. Both those incidents during RR matches.

7:52 PM IST: Two players who are expected to play crucial roles for their respective teams, Ajinkya Rahane for RR and Rashid Khan for SRH, are in the cusp of personal milestones. Rahane need 53 to reach 5000 in T20s, while Khan is two wickets to 50 wickets for the team.

7:38 PM IST: For SunRisers, Jonny Bairstow will not be there. He formed one part of the most successful opening pair this season. In his stead, Wriddhiman Saha will need to to make an instant impact.

7:35 PM IST: Royals have two changes - Liam Livingstone and Ashton Turner come in for Ben Stokes and Jofra Archer respectively, while SunRisers have six changes. And Wriddhiman Saha will play his first match of the season.

7:31 PM IST: Steve Smith has won the toss and will bowl first.

7:20 PM IST: This is crunch time for Rajasthan Royals. Seventh in the league table and with three of their best players -- Ben Stokes, Jos Buttler and Joffra Archer -- already gone for Cricket World Cup 2019 duties, the Steve Smith-led side will look for a miracle of sorts to qualify for the playoffs. And that miracle 'can' only happen if they beat SunRisers Hyderabad tonight.