Rishabh Pant, who was often hailed as the heir apparent to MS Dhoni, was pipped by veteran Dinesh Karthik in India's Cricket World Cup 2019 squad. But he showed brilliant wicket-keeping skills during DC-KXIP match of IPL 2019. 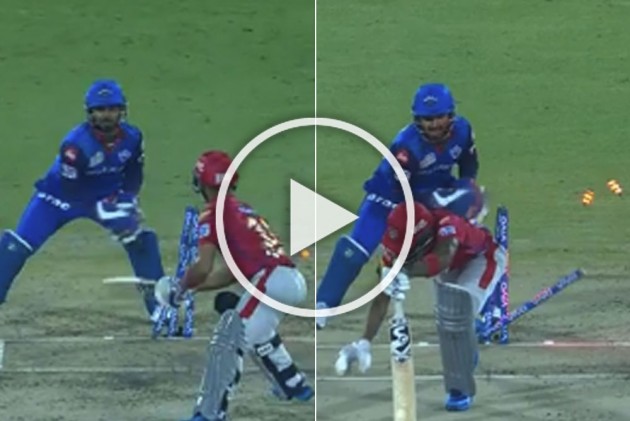 The first one, to send back KL Rahul, was a brilliant work of wicketkeeping -- lightning quick -- comparable to the ones effected by legendary MS Dhoni.

R Ashwin continues with his second over. Eight runs from the over, including a streaky four, courtesy a fine outside edge. DC-80/1 after nine overs. Delhi need 84 runs from 66 balls. Shikhar Dhawan and Shreyas Iyer have added 56 runs from 36 balls. That happened off the fourth ball of the second over, bowled by Sandeep Lamicchane.

It was followed by another stumping, relatively easier, but nonetheless, a very good one, off the third ball of the 17th over, bowled by Axar Patel.

Gavaskar said the move is surprising but backed Karthik as a better wicketkeeper. Indian selectors said that Pant missed out due to his raw wicketkeeping skills.

Reacting to it, former India captain Sunil Gavaskar said he is surprised at Pant's exclusion given his good batting form and improvement in wicketkeeping skills.

"A bit surprised, looking at his (Pant’s) form. He was batting exceptionally well, not only in the IPL but before that also. He was showing great improvement in his wicket-keeping as well. He brings that left-handed option in the top-six which is very handy against the bowlers," Gavaskar told India Today.