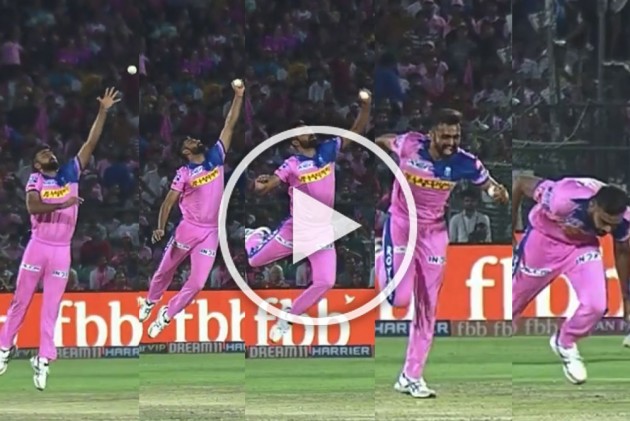 After winning the toss, RR put SRH into bat, the match started with five overthrows from Varun Aaron's first over. The second over also started with overthrows, then a series of misfields and couple of dropped catches in the middle overs, including those of Shakib Al Hasan and Wriddhiman Saha by Varun Aaron and Shreyas Gopal.

But skipper Steve Smith and Unadkat made up by taking stunning catches. In the 13th over, Smith took a running catch to send David Warner back, then in the 17th over, Unadkat showed his athleticism by plucking one.

After Aaron dropped Shakib off the first ball of the 17th over, Unadkat deceived Hooda with a slower delivery, forcing the batsman to play an uncontrolled push with the ball taking the aerial route towards the bowler. Unadkat, on his follow through, took a perfectly timed leap to complete the catch with his left hand. He was in the air, hanging like a possessed basketball player after making a slam dunk.

A stunned Jaipur crowd gasped even as commentators hailed the effort in an incomparable manner. The 27-year-old took two more catches and produced bowling figures of 2/26 from his four-over spell won the man of the match award.

Chasing a 161-run target, RR won the match by seven wickets with five balls to spare. The win helped RR maintain their slim hope of making the playoffs.