Although a win has taken KKR to 14 points and in top four, there fate is dependent on results of matches to be held over the course of next two days 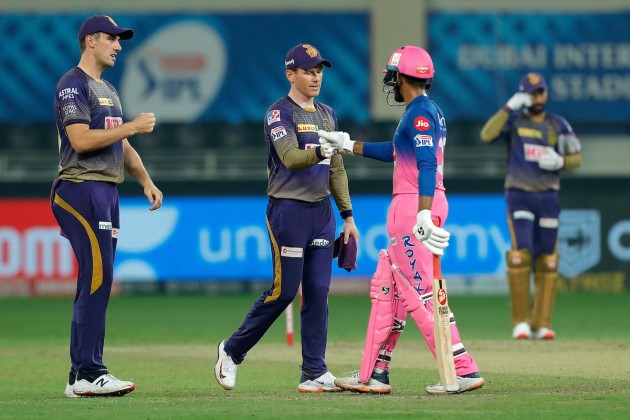 Kolkata Knight Riders couldn’t have done more. Coming out all guns blazing the team managed to post a good total of 191 despite being under pressure and at one point being reduced to 99 for 5 in 13th over. But then came out to defend the total aggressively despite being hampred by dew. (HIGHLIGHTS)

A 60-run win means KKR are now on 14 points and in the top four but a net run-rate of -0.214 might be an impediment towards qualification. KKR now must wait for the next two days and hope the results go in their favour.

While SRH have a game left, KKR will also have to see who wins the battle between Delhi Capitals and Royal Challengers Bangalore. They will also keep an eye on the loss margin as NRR might come into play. The winner of DC-RCB enters playoffs but this will likely have a 3-way tie for the last two spots. (POINTS TABLE)

Captain Eoin Morgan believes his team couldn't have done anything more in its must-win game against Rajasthan Royals and sought divine intervention for the side to make it to the IPL play-offs. (FIXTURES & RESULTS)

"Yes, I was aware of the numbers (about net run rate) but you need to first get yourself into a winning position. I don't think we could have done anything more today. So whatever happens from here is up to the Gods," Morgan said after the match.

KKR's entry into the play-offs will now depend on the result of the matches between Delhi Capitals (-0.159) and Royal Challengers Bangalore (-0.145) as well as the one where Sunrisers Hyderabad (+0.555) take on defending champions Mumbai Indians, who have already qualified.

In case, SRH wins, KKR's chances of qualification will hinge on a real poor defeat for either DC or RCB in their particular game.

Put in to bat, Morgan smashed a 35-ball unbeaten 68 to take KKR to 191 for 7 and the skipper said it was a par-score on this track.

"I thought it was around a par score. Every batsman who came back in and said that it was a beautiful wicket with the dew in. We lost wickets between 10th and 15th overs, and to finish like we did was really good," said Morgan.

Royals skipper Steve Smith, on his part, thanked BCCI for arranging a fantastic tournament in tough times.
"The BCCI and everyone involved to get this tournament up and running have done a fantastic. Hope we were able to put few smile on people's faces, especially in India where it's been tough."