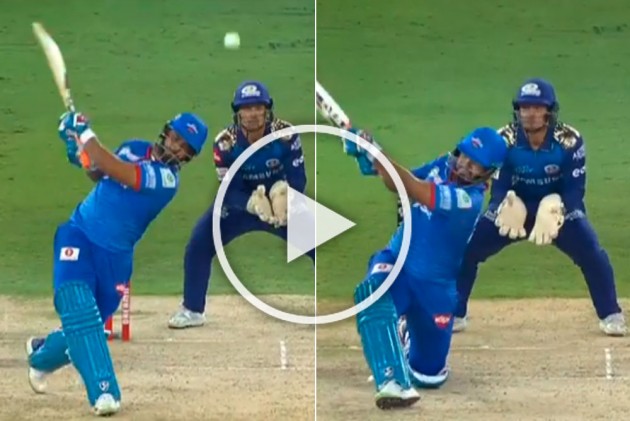 Rishabh Pant hit the most-welcome fifty of his Indian Premier League (IPL) career as Delhi Capitals fought back after losing three early wickets in the 2020 final against defending champions Mumbai Indians on Tuesday in Dubai, UAE.

Delhi captain Shreyas Iyer won the toss and opted to bat first. But a certain Trent Boult rocked Delhi with the wickets of Marcus Stoinis and Ajinkya Rahane, then Jayant Yadav got rid of Shikhar Dhawan, leaving Delhi at 22/3 in 3.3 overs.

But Pant and Iyer added 96 runs for the fourth-wicket as Delhi launched a rearguard action. In the process, the left-handed batsman reached his first fifty of the season -- in 35 balls with a four off the third ball of 15th over, bowled by Nathan Coulter-Nile. Pant, however, departed three balls later.

Earlier, Pant ((23 years 37 days) his Krunal Pandya for two sixes in the 10th over. Watch those lusty hits here:

By hitting 56 off 38 balls, with the help of four fours and two sixes, Pant also became the second youngest to hit a 50+ score in an IPL Final. The record however belongs to Manan Vohra (20 years 318 days), who hit 67 for Kings XI Punjab in the 2014 final against Kolkata Knight Riders in Bengaluru.