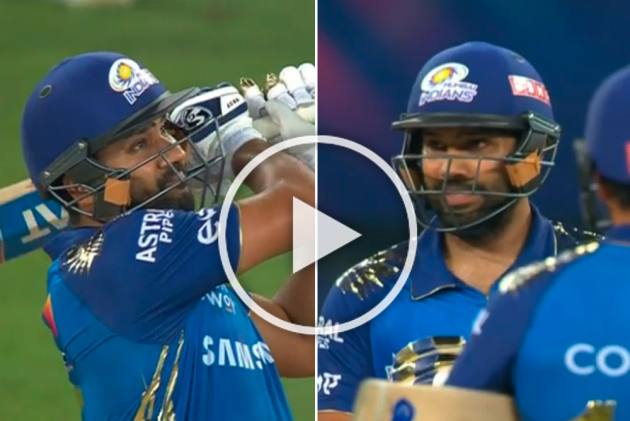 The most successful captain in the history of Indian Premier League (IPL), Rohit Sharma was at his majestic best as Mumbai Indians got off to a flier against Delhi Capitals in the final of the 2020 edition on Tuesday in Dubai, UAE.

Chasing a 157-run target, Rohit raced to his fifty in 36 balls with the help of three fours and four sixes after Marcus Stoinis removed his opening partner Quinton de Kock (20 off 12) in the fifth over.

But the best of the lot was a six of Anrich Nortje in the fourth over. Rohit hit the last ball for a massive six over mid-wicket after coming down the pitch. An outlandish pull shot. Watch it here:

Rohit was however involved in a shocking mix-up with Suryakumar Yadav in the 11th over while trying to get a quick single off the bowling of Ravichandran Ashwin.

Rohit not only became the second player to make 200 IPL appearances but also registered his 4,000th run for Mumbai in the tournament.

Earlier, skipper Shreyas Iyer's unbeaten fifty lifted Delhi to 156 for seven after Mumbai Indians had them in all sorts of trouble.

Opting to bat after winning the toss, Delhi were tottering at 22 for three in the fourth over before the duo of Iyer (65 off 50 balls) and Rishabh Pant (56 off 38 balls) added 96 runs for the fourth wicket to steer their team to safety.

Pant hit four boundaries and two sixes on the way to his first fifty of the season, while Iyer struck six fours and two maximums.

Mumbai Indians were off to the best possible start with Trent Boult squaring Marcus Stoinis all ends up with the final's very first delivery.

Ajinkya Rahane and Shikhar Dhawan were dismissed in no time and the Capitals soon found themselves in a sport of bother.